Deputies say they tried to scare the bear away from homes, without success

July 08, 2019
3 comments
Over the weekend, from July 6 to 7, the Deschutes County Sheriff's Office received six reported bear sightings in the span of 36 hours. On Sunday, deputies went to Gina Lane near Sunriver, where they say they found the young adult male bear in the backyard of a residential property.

Deputies say they tried several times to scare the bear away from public areas, but say they were forced to shoot the bear in the interest of public safety. 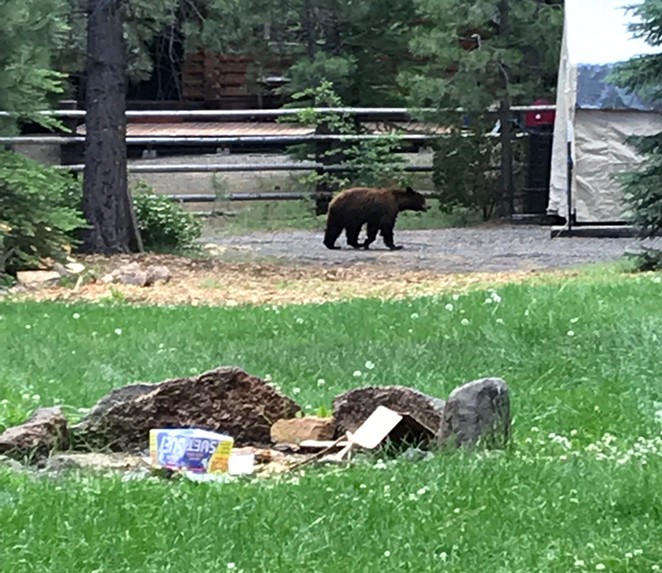 "This bear was a threat to public safety and I would not allow it to have an opportunity to injure or kill a person," said Sheriff Shane Nelson in a news release. "This bear was seen too many times in this area and we were not going to take a risk with an encounter."

When deputies first arrived on the scene they say they tried to scare the 96-pound bear back into the forest by using "beanbag projectiles" shot from a 12-gauge shotgun. The bear was hit three times and only reacted by climbing a tree for a short amount of time. Here you can find a video of this interaction.

From here the bear began walking south through more of the residential area where deputies encountered multiple people and asked them to go inside—including a group of children playing in a pool. Eventually it made its way to Spring River Road, where an oncoming vehicle almost hit the bear.

According to the news release, the deputies witnessed the bear show "signs of aggression" as they followed him along.

The bear has since been turned over to the Oregon Department of Fish and Wildlife in Bend for further inspection.


Why black bears might end up in your yard


According to the Humane Society of the United States, most occurrences of bears in neighborhoods are due to easy access to food without the risk of being scared away. This most commonly affects young-adult male bears and leads them to become "nuisance bears," which are essentially bears too accustomed to human life. This can happen if they find a continual and easy source of food after separating from their mothers. If they don't get scared away the first time they'll keep coming back for more.

When this happens it can often times end up with bears being killed or trapped, just like the situation in Sunriver. To prevent this from happening the HSUS suggests making trash inaccessible, keeping grills clean, enclosing your compost pile and to recycle wisely.


- Stand and face the bear directly. Never run or approach it.
- Make yourself look big by spreading arms or a piece of clothing.
- Make as much noise as possible by yelling or using other noisemaking devices.
- Use bear spray if approached.
- Do not play dead if a black bear attacks you– fight back.
- Once the bear leaves remove whatever may be attracting it to the area– pet food, garbage, dirty grill, bird feeder, etc.