Let's imagine for a second that you're not one of the people who lives—or is soon to live—in the vicinity of the Deschutes River Trail. Last week, the head of the Oregon State Parks and Recreation Department decided not to consider a rule change that would allow for a pedestrian bridge across the Deschutes just north of Bend's urban growth boundary.

If you don't live in the area, we'll imagine you're not taking on NIMBY tendencies and can be less emotional about the debate around whether to allow a bridge there. As it stands now, a state scenic waterways rule doesn't allow bridges across portions of the river considered "wild and scenic," as is the case for that portion of the Deschutes.

In a statement released May 10, OPRD Director Lisa Sumption concluded that "demand for recreational opportunities is increasing, putting pressure on natural resources and raising concerns among property owners adjacent to major recreation corridors," and "while increased coordination with public, private, and other governmental organizations could improve rule effectiveness, she found no reason to pursue a rule amendment specific to the Upper Deschutes."

But were the adjacent property owners truly concerned about natural resources and the environment? Here's why we're asking. Just north of the proposed bridge site, there's a current proposal to build 78 more homes close to the Deschutes River. Opponents of the pedestrian bridge argued that the bridge would damage wildlife habitat and degrade the quality of the river. In short, they relied on an environmental argument to further their cause—even getting state legislators to act in their favor.

Meanwhile, some of those same people are living in large homes along the river, where a pedestrian bridge would also mean more visitors to their backyards. It begs the question: do those same people oppose the construction of 78 more homes in their neighborhood? And if the argument was framed around environmental impacts, wouldn't driving to that site south of town every day mean more of an impact than the option to safely bicycle the same distance via the Deschutes River Trail?

According to a study released by the European Cyclists' Foundation in 2011, a bicycle emits roughly .075 pounds of carbon per mile. (That figure also factors in the food a cyclist eats to fuel for the ride.) If a cyclist biked the length of the Deschutes River Trail (rounded up to an even 20 miles), that would equate to 1.5 pounds of carbon dioxide emitted per day, or 547.5 pounds a year. By comparison, a vehicle that gets 20 miles to the gallon, driven 20 miles a day, seven days a week, produces 7,232 pounds of carbon dioxide per year, according to an Environmental Protection Agency calculator. 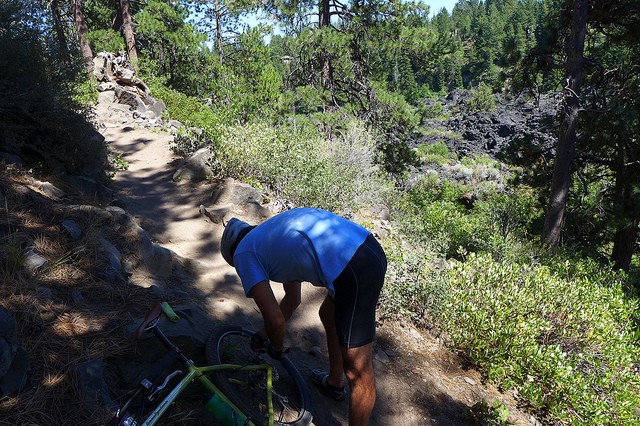 Were those cyclists able to use the trail as a form of transportation to and from downtown Bend and forego driving, you can see how that would benefit one facet of the environment. And that's not even mentioning the impact of the homes and the carbon footprint they possess, as well as the homes' impacts on wildlife habitat. (In case you're wondering, the average American home emits 25,536 pounds of carbon dioxide into the air each year, according to the EPA.)

We understand that these comparisons are not apples to apples, and that a multitude of other factors play into the suitability and viability of building a bridge or a home or a new park. Still, we take exception to the contingent arguing against the bridge purely from an environmental standpoint, all while living in a large home in a location without an easy bike route.

We commend the Bend Park and Recreation District for being forward-thinking enough to vision out this trail, even before the developments and the residents moved in. With that in mind, we would love our leaders and our neighbors to take a more holistic look at what constitutes an environmental threat. OPRD seems to agree, adding to the May 10 statement, "Continued development pressure means more coordination and cooperation are needed between public agencies, residents, and recreation enthusiasts."

Shutting down a bridge for "environmental reasons" may seem like the right thing to do, but when the proposal for even more homes near sensitive habitat doesn't receive the same deal of scrutiny, the environmental argument seems quite disingenuous, indeed.

Free Will Astrology—Week of December 3

Rent Moratorium Proposal Asks Both Sides to Give a Little. They Should.