Artists showcase their take on water at High Desert Museum

It began a year ago, when The High Desert Museum invited four artists, including local creative laureate Mosley Wotta (Jason Graham), Ka'ila Farrell-Smith, Dana Reason and Harmonic Lab to take field trips into various places in Oregon alongside curators, geologists, archeologists, ecologists, dam technicians and natural resource managers to look at and explore our relationship to water. The result is a fascinating exhibition titled "Desert Perspectives: Water Shapes the West," now on display through Sept. 29. 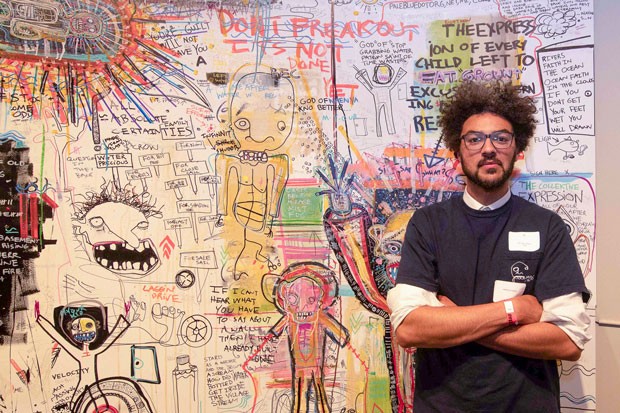 On the ceiling is an enormous and graceful sculpture created by Harmonic Lab that mimics water. It's calming, beautiful and mesmerizing—the way tides can be, lapping at the shore. Each contemporary artist has taken their own medium to explore the world of water, which, at first, seems simple. There are videos and soundscapes, paintings and music. Alongside the art are displays with information on three basins in the local high desert, including the Klamath, Mid-Columbia and Great Salt Lake basins.

"We are finding that art is an accessible way for our community to explore our mission," says Dana Whitelaw, executive director of the High Desert Museum. Whitelaw finds it exciting to see artists and scientists sharing ideas, then ultimately working on their own to decipher the excursions.

The exhibition even spills out onto the grounds of the museum. Mosley Wotta created leather wraps with his writing and drawings around trees throughout the grounds. Reason, a composer, has installed a soundscape in one of the sitting areas. On a sunny Friday afternoon, I sat alongside the brook, in the trees listening to Reason's composition. Not exactly melodic, but transfixing. The sounds fit perfectly within the shake of the trees, the babble of the brook and the songs of the birds, as if it was harmonizing with all of them.