As it moves to evict people from Juniper Ridge, the City of Bend may allow an emergency camp for people without homes

April 16, 2020
7 comments
Staff from the City of Bend will kick people off city-owned land at Juniper Ridge next month to make way for a new section of sewer pipe. But meanwhile, new regulations passed by the City Council Wednesday night might make it possible to site a camp for the unhoused on land owned by the City. 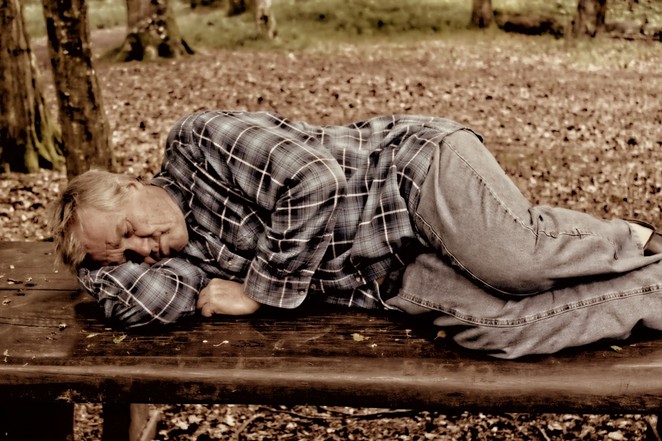 The City of Bend and Deschutes County have been ordered by Gov. Kate Brown to come up with a strategy to protect people without shelter during the COVID-19 pandemic—and the economies of the region won't open without one.

"We also need an effective quarantine and isolation program for people who test positive," Gov. Brown at a press conference on Tuesday. "It will need to include strategies for nursing home residents and address the needs of people experiencing houselessness as well."

But Shelly Smith, the unhoused liaison for the City of Bend, told local housing advocates in an email on April 10 that the City will post 30-day eviction notices at Juniper Ridge (a camping village in Northeast Bend) on April 27. Smith told the Source she had no “new information on where they would go.” The City is building a new sewer pipeline through the area—often used as a refuge for those without homes—to create infrastructure for future development.


Clearing encampments can cause people to disperse throughout the community and break connections with service providers. This increases the potential for infectious disease spread. -Centers for Disease Control and Prevention tweet this

By contrast, the City of Portland worked with Portland nonprofit JOIN to build three temporary outdoor emergency shelters that will open next week.

“Unless individual housing units are available, do not clear encampments during community spread of COVID-19,” the guidelines read. “Clearing encampments can cause people to disperse throughout the community and break connections with service providers. This increases the potential for infectious disease spread.”

The CDC recommends setting up portable latrines and hand-washing stations for encampments of more than 10 people.

Eric King, Bend city manager, told the Source that the City is not “evicting” people at Juniper Ridge, but instead needs to move people out of the construction zone to keep them safe.

“The City is working with the County to coordinate efforts for the unhoused such as hand-washing stations, billboards and outreach to all camps across the area, to people deemed high risk,” King said. “Juniper Ridge is one of many camps all over Central Oregon; people are living in vehicles, couch surfing; there’s a whole continuum of need. The sewer infrastructure will provide for more housing units and will affect the whole housing ecosystem.”

People in the homeless camps are concerned about the virus as much as the rest of us. They think they're safer at the camps than they are coming into town. - J.W. Terry, executive director for Central Oregon Veterans Outreach tweet this


J.W. Terry, executive director for Central Oregon Veterans Outreach, said some people at Juniper Ridge have already moved north toward other camps and away from the construction site, but not many. King said of the 30+ camps, around eight have moved.

“They are pretty apprehensive, very leery of the City,” Terry said. “They know from talking with COVO that everything is on hold for now, but they know it’s coming. This isn’t a good time until we’re through the pandemic. People in the homeless camps are concerned about the virus as much as the rest of us. They think they're safer at the camps than they are coming into town.”

People without homes in Bend no longer have the option to stay at the Bend Shelter (next to the Deschutes County Adult Jail), originally set up as a winter warming facility. It closed Wednesday, after extending operations for an additional month. Sheriff Shane Nelson said he now needs the extra space to provide social distancing for adults in custody. The Bethlehem Inn and Shepherd’s House Ministries have not been accepting new guests for weeks now, also in an effort to prevent the spread of COVID-19. Local housing advocates are also struggling to provide food and meals because of disruptions to food service programs and increased demand with more people out of work. The Deschutes Public Library branches and other public spaces are closed for now, and the Community Shower Truck is out of commission. Both service providers and people sleeping outside and in shelters don’t have access to personal protective equipment.

Leaders of the Central Oregon Homeless Leadership Coalition are working with Deschutes County to rent a block of motel rooms with a goal of offering a place of quarantine and respite for unsheltered people who are vulnerable or who have contracted COVID-19, with some access to support services and medical staff. But local motels—many of which have already banned people without homes from staying at their properties—now have policies excluding people who have contracted COVID-19.

Molly Wells Darling, the Behavioral Health Branch Director through the Deschutes County Incident Command, said all motels in Deschutes County were contacted about the room-block program last night and this morning. The rooms and linens would be cleaned by sanitization professionals provided by Deschutes County, she said.

"We have place hand washing stations and bulletin boards in the homeless camps [including Juniper Ridge]," Wells Darling said. "We collaborated with the City of Bend to build an interactive map that maps open bathrooms, hand wash stations, food resources, WiFi access, etc."


Hope for a "safe parking" camp in Bend during the pandemic


The Bend City Council passed an amended administrative order last night (extending through May 6) that includes a provision to establish “transitional housing, which may include yurts, huts, cabins, fabric structures, tents and similar accommodations,” on City property, according to the declaration. The City plans to work with local nonprofits to manage the temporary camp, but will not take the lead on the project, at least for now. The declaration also allows for emergency shelters at churches or other places without development approval from the City.

“The language of the declaration was there to provide some flexibility,” said Eric King. “The City does not provide direct services; our role is to fund affordable housing... The City has given millions to social services (including housing organizations) over the years.”

King’s declaration does not provide any direct funding for hosting a safe camping area on City property. King said City Council will likely discuss a structured camp for the unhoused in Bend during the May 6 City Council meeting, but the focus will likely be on a the tiny homes for veterans project already in the planning stages.

“I was hopeful that HB 4001 (housing emergency bill) would have passed in the [Oregon Legislature “short” session] which would have funded a navigation center in Bend, and removed some regulatory barriers that would make it easier to site [shelters and camps],” King said. “But with the COVID crisis, the Governor may resurrect some of these concepts.”

The “short” session in the Oregon Legislature ended early this winter because Republicans walked out, once again, to protest a climate action bill. HB 4001 would have brought over $4 million to Central Oregon for navigation centers in Bend and Redmond.