As Kanye says, crawl before you ball 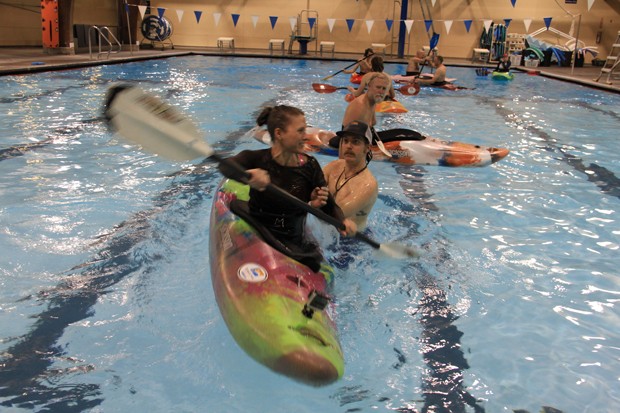 Currently, I am 10 days deep. My first time in a whitewater kayak was last year in an early season Brace & Roll class. I was totally out of my league. This year, I've taken three "Full Immersions,"—the intro to whitewater kayaking weekend classes offered by Tumalo Creek Kayak & Canoe—and one day of private training, and I'm feeling like hot sh**.

I've got my rudder stroke on lock. I've dialed in the form for my forward stroke; torso rotation is coming along with the stern draw and I am looking fairly solid on catching eddies. There's only one problem: I can't roll.

The critical nature of the roll cannot be overstated. Rolling is what a kayaker does when upright balance is forfeited. One common scenario: the kayak catches an edge and in no time is upside down.

There are precise steps involved in learning to roll. Once you're fully immersed in the river, hanging upside down from the kayak, you bend at the waist and tuck forward. This way, as the kayak is still moving with the river, your helmet should catch any rocks you inadvertently bump. Then, you place your paddle parallel to your boat, use it to brace while performing a hip snap, and up you pop like a surfacing rubber ducky. Sounds simple, right?

When I get underwater upside down, I lose it. I totally panic. I immediately believe that I'm breathing in water and going to drown. I thrash and twist and arch my back, flailing backwards so as not to protect my head in the recommended forward tuck. It's like an involuntary underwater ugly cry, multiplied by a million.

On my first enrollment in Full Immersion, during the second day of training, just below Bend's Bill Healy Bridge, my instructor Will Howerton offered to partner up with me to practice the T rescue.

If you can't roll, the T rescue is an alternative. While you're upside down, a kayak buddy pushes into the side of your boat with the bow of their kayak. The downed kayaker can self-arrest by reaching up out of the water and grabbing the nose of the buddy's boat and then righting themselves. My problem is, once I am submerged, I don't know where right and left is or how to grab anything.

I also wholeheartedly dread the painful nasal flush which plagues me like a forced natural neti pot (or waterboarding) anytime I go underwater.

When Howerton tried to practice the T rescue with me in 4 feet of still water, I pulled my spray skirt before I could even try. I emerged with water clearing from all my head's orifices and a grimace of death we now call the "Wet Hello Kitty" face. It isn't a good look.


When I get underwater upside down, I lose it. I totally panic. I immediately believe that I'm breathing in water and going to drown. tweet this

Pulling your spray skirt or the wet exit is what greenhorns do to get out of their kayaks. It's a failsafe and meant as a last-ditch resort. When you swim as a result, it's never a proud moment. To recap, at this point I am not even close to rolling or performing a T rescue and usually I mess up the wet exit, too.

To properly perform a wet exit, one should bend at the waist, reach forward, grab the large loop at the head of the cockpit on your spray skirt, pull and push the kayak away from the body. It's quite graceful when rightly executed.

On the second day of the first Full Immersion, on the Lower Deschutes between Buckhollow and Beavertail, I get excited. However, with the timing I chose, I think the ejection could almost be called a dry exit. My buddy Jeff Michael was running sweep for the class in the eddy above Wreck Rapid when he witnessed my dry exit. He said I made it through the meat of the toughest rapid and then, as I lost balance coming into the eddy, I pulled my skirt while still upright. He said it happened so fast, he could see my knees come out of the boat before I capsized. Rookie move.

Although Michael wasn't there to attest, during the second class, I wet exited at the same location on Wreck Rapid. I was still in the current and fully submerged before I thrashed my way out of the cockpit in the most hideous fashion. I then hopped on my overturned kayak like a kickboard and worked it to shore. A small win: I didn't jump out of the boat while upright.

Like Kanye says in the 2011 smash track "Ni**as in Paris," "Look, you need to crawl 'fore you ball." Although it seems Kanye is referencing sex acts with strangers, I have found it to be a solid mantra in my whitewater kayaking baby steps (or strokes, rather).