Did Bend Leave Public Transit in the Dust?

August 25, 2020
comment
Soon, the Bend City Council will approve the City of Bend’s Transportation System Plan, which will then head off to the state. In Salem, Bend will be judged by its ability to accommodate the flood of newcomers (another 100,000!) that will arrive in the next 50 years. 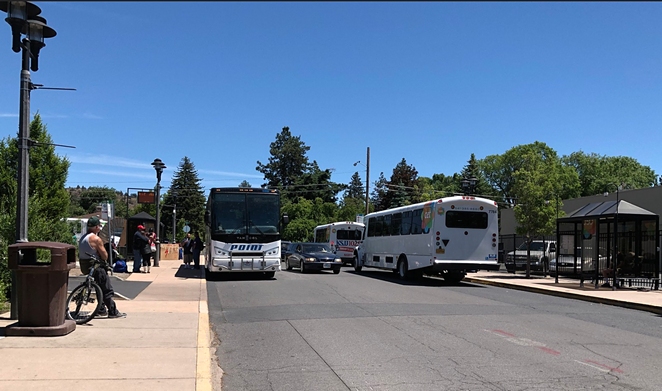 The 150-page document is a result of years of collaboration among local and regional governments and community members—but as some have publicly pointed out, public transit doesn’t get much attention. Public transit appears in the document about halfway down the City’s list of goals for transportation over the next 20 years.

Some believe the City’s plan underfunds public transit, leaving out one of the keys to ensuring Bend is a livable community in the future. Because transit often serves communities with a lower socio-economic status, this lack of attention for transit may also call into question the City’s commitment to inclusion, said Erin Foote Morgan, a longtime public transportation advocate, who lobbies for the group Hawthorne Avenue Neighbors. The group wants the City to move the bus station to another location, and sees the transportation bond the TSP as the opportunity to make the change.

On the positive side, the transit system will receive millions more dollars from the State in the years to come. And, if Bend’s transportation bond passes, the City will build a more robust system of pedestrian and bike paths that could reduce traffic congestion and greenhouse gas emissions.

Planning for the next 20 years comes to an end

The City is required to craft a Transportation System Plan that demonstrates to the State that Bend supports Oregon’s land use goal to reduce the number of vehicle miles traveled. This is required for expanding the City’s urban growth boundary, which the City may try to do many times in the coming decades. Portland State University’s forecasting puts Bend’s population at 132,000 in the next 15 years.

The Bend City Council will approve the plan at its next meeting, but before that, some are concerned about the small amount allocated to public transit. Out of the $650 million in the TSP that Bend will spend on transportation projects over the next two decades, it has $11.5 million earmarked for public transit, totaling less than 2% of total transportation funding.

If the State approves Bend’s TSP, it unlocks the City’s ability to expand the urban growth boundary, increase density and approve new developments, which will bring millions to the City government in system development charges.

Meanwhile, the plan demonstrates that public transit is the key to reducing vehicle miles traveled in Bend by 20% in the years to come.

“What we’re hearing from the City is that public transit is the most important thing to getting cars off the road, yet it is the least funded,” said Foote Morgan. 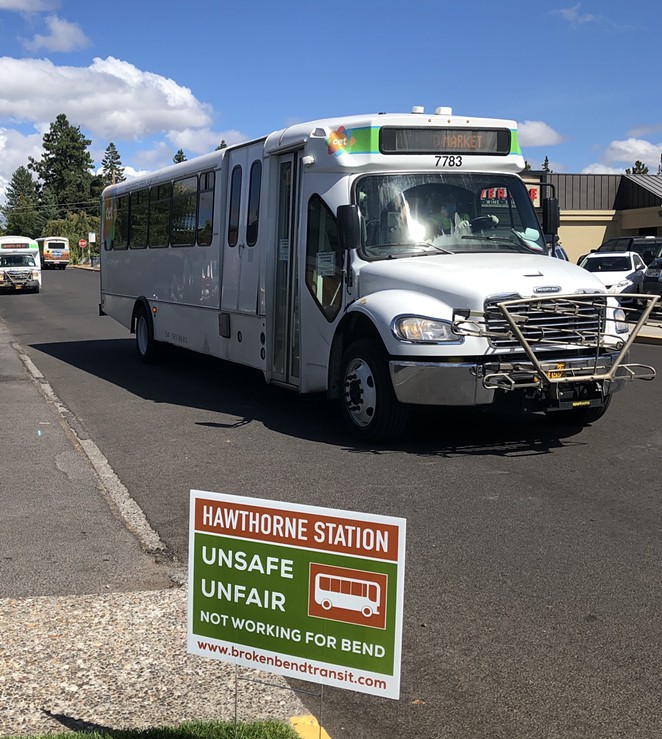 Cascade East Transit's plan designates Hawthorne Station as the City’s ongoing transit hub for the next 20 years, with mobility hubs scattered throughout the city to lessen the impact on the central station. Businesses and residential neighbors near the station—near the Safeway complex on NE Third Street—have been complaining for years about congestion and safety concerns in the area. Signs currently posted near the depot express how the station is “not working for Bend.”

While Bend’s TSP includes money and plans for mobility hubs, (mini bus stations with bikes, cabs and safe sidewalks), the timeline for building these won’t be for another decade.

With the economy in shambles in 2010, the City opted to hand over its small public transportation system, Bend Area Transit, to Cascades East Transit. CET was then and is now the regional bus system for Central Oregon. The City agreed to pay CET $1 million a year plus inflation: last year it paid $1.4 million (with a little extra for some experimental routes). CET is managed by the Central Oregon Intergovernmental Council, a group of leaders from each city and the Confederated Tribes of Warm Springs, which advises on regional planning for housing, employment and economic development.

In other urban centers throughout the state—such as Portland and Eugene, for example, public transit is paid for through a small slice of property taxes. The City tried to establish a transit district in 2008, and it failed by a margin of 53% to 47%. 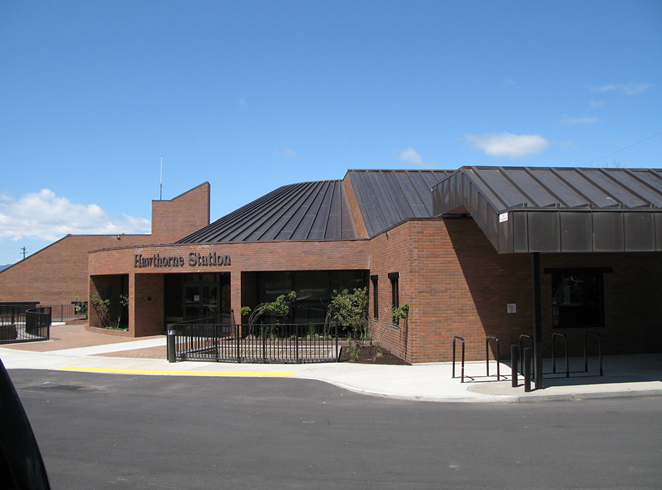 When the gas tax proposal failed in 2016, Bend city leaders wanted to get behind a transportation bond measure that had a solid chance of passing, according to Bend City Councilor Bruce Abernethy.

The conservative members of the Council believed public transit would “poison” the bond, Abernethy said. In an effort to get them on board, and in reaction to propaganda declaring Bend’s “War on Cars,” the Bend City Council quietly omitted any mention of the word “transit” in its list of goals for the committee it was forming to advise the City Council on the bond measure. According to Ariel Méndez, a member the Citizen Transportation Advisory Committee, over the course of two years developing the City’s transportation plan, there was very little discussion about public transit.

A second justification for excluding transit from the conversation about Bend transportation, as Abernethy explained, was that transit was managed by an inter-city system (CET) and an intergovernmental council (COIC), and therefore it should have authority over its own planning.

CET—a tiny organization with little control over its own funding—did eventually come up with its own 20-year plan. Critics of the TSP planning process, like Foote Morgan, say the City of Bend abdicated responsibility for its own growth. It could have provided brain power through its own City staff as well as other resources to support a more robust planning process for the next two decades of public transit, she said.

Abernethy explained that another reason some city councilors were resistant to supporting funding for transit was that CET recently began receiving millions per year from the State. In 2017, State legislators passed a mandate for the Statewide Transportation Improvement Fund bankrolled by a state payroll tax of one-tenth of 1%. This costs the average employee $1 per week. Most of this money is distributed to counties based on how much taxpayers contribute, and in Bend, this is funneled through Deschutes County before filtering through COIC and CET. The state fund also provides grant opportunities.

CET’s base budget for this fiscal year is $5.8 million. STIF funding adds an additional $3.6 million, which should continue to go up by an additional $1 million every five years or so.

Meanwhile, the City’s contract providing $1 million a year to CET is up. Anti-transit activists have suggested that the City Council vote to strip the agency of this funding, now that is it getting more money from the State.

Abernethy said CET may qualify for more federal funds if former Vice President Joe Biden wins the 2020 presidential election, because Biden has proposed spending $2 trillion on a “Build Back Better” plan which includes funding for public transit. Right now, nearly half of CET’s funding comes from the federal government, to the tune of $2.5 million in 2018.