Did the rain help the wildfires in Oregon? | Bent | Bend | The Source Weekly - Bend, Oregon

Did the rain help the wildfires in Oregon? 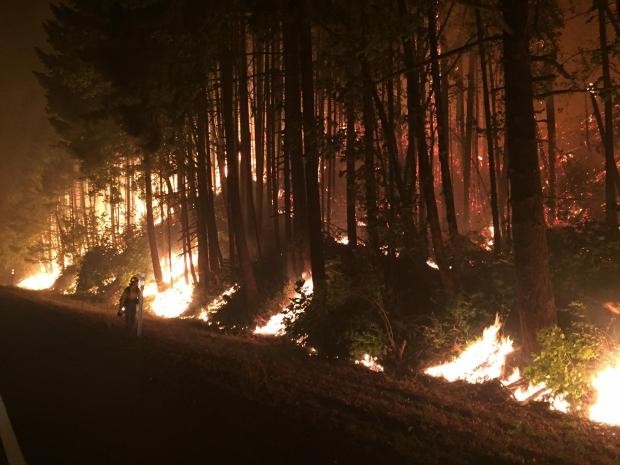 For the first time in weeks, rain poured down on Central Oregon this Thursday.

The hot and dry conditions over the last few months have fueled the outbreaks of over ten wildfires in Oregon and many more in Washington, Idaho and Montana, making this one of the worst wildfire seasons the western U.S. has ever seen, according to U.S. News and World Report. With more moisture in the air, almost all fires are estimated to be fully contained within the next month, according to The Oregonian.


The Milli Fire area likely received .03 to .10 inches of rain on Thursday, causing the fire closure area to reduce in size, according to an update from the Central Oregon Interagency Dispatch Center.


It is expected to burn out naturally around Oct. 1 once it runs west into the lava fields, but remains at 60 percent containment.


The area surrounding Black Butte Ranch and Cold Springs Campground along the northern border of the fire has now been reopened to the public. However, the western, southern and eastern border closures remain intact. You can find more information on forest closures here.

Relative humidity reached 100 percent in some areas as firefighters continue to work on structure protection, burnout operations and debris removal. Burnout operations will cause smokier conditions, but will help secure the fire line near the Bridge of the Gods.


Interstate 84 remains closed between Troutdale and Hood River because of road debris and the potential of falling rocks and trees, however, the U.S. coast-guard is reopening the Columbia River to commercial ships for night passage, according to fire crews.


The Office of the Oregon State Fire Marshal has reported the number of structures destroyed by the Eagle Creek Fire has grown to four. One structure was a full time occupied residence and the additional three structures were non-full time residences that were unoccupied. The Eagle Creek Fire is now 7 percent contained and has plateaued at 33,382-acres, according to an update from fire crews.