"The Green Knight" is a Visual Stunner

If he wanted to, I think filmmaker David Lowery could be the next Steven Spielberg. Not in the style of their films or even the kinds of movies that they make, but in the realm of being an artist whose style becomes synonymous with their work. When you watch a Spielberg movie, the rise and fall of action and character and excitement feels Spielbergian. Now, Lowery has only made five narrative features, but his tone and texture are so original and so perfectly his own that a decade from now I wouldn't be surprised if he was one of the most well respected directors on the planet.

The "Badlands"-esque somber drawl of "Ain't Them Bodies Saints" got him comparisons to Terrence Malick. The child-like wonder of "Pete's Dragon" saw him compared to Spielberg for the first time. 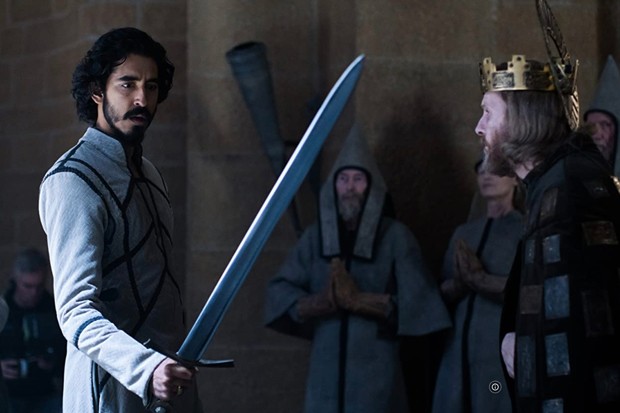 With the unforgettable grace of "A Ghost Story" he became one of my personal favorite directors that ceased needing to be compared with anyone else. Following that up with Robert Redford's final screen performance in the gently beautiful "Old Man and the Gun," Lowery proved that there really wasn't anything he couldn't do with a camera. Next year, we'll have his distinct vision set on "Peter Pan and Wendy," which is bound to be the most original version of that story we've seen in quite some time.

But now, we have the brand new "The Green Knight," based on the 14th-Century poem "Sir Gawain and the Green Knight." Distributor A24 has been known to make some deeply strange and somber films like "Hereditary," "Midsommar" and "The Witch," so already you should know what you're getting into here. This isn't comparable to any other Arthurian adaptation ever made. There's barely any swordplay or explosive action set pieces; instead we have a creepy talking fox, naked giants and a green knight made out of bark and leaves.

More than anything, Lowery's "The Green Knight" reminds me of John Boorman's 1981 mind f*ck, "Excalibur." The film is episodic and feels like each 15 minutes jumps into a new stanza of a poem, caring way more about creating a world and a tone than being a typical big budget blockbuster. Dev Patel's performance as Gawain is such an epic and understated bit of acting that he's become almost unrecognizable as the kid from "Slumdog Millionaire." Now I'm very much rooting for him to be the next James Bond.

"The Green Knight" is weird and not your typical satisfying cinematic experience. It makes the audience do a lot of the heavy lifting when it comes to the story and the themes. There's also not much closure to the film, leaving the audience some homework to decipher how they think everything will play out after everything ends. "The Green Knight" might not be a typical fun night out at the movies, but it's an unforgettable one.

David Lowery isn't a household name yet, but he will be. His vision is so singular and his films so memorable, that I have a feeling that his "Peter Pan" will be what cements him as a true piece of the zeitgeist. Watch all of his movies. Start with "Ain't Them Bodies Saints" and go from there. Trust me on this one.