Impassioned parents and community members are intensifying their pleas to stop an 84-foot cell phone tower being constructed adjacent to Elk Meadow Elementary School. The Verizon tower, approved with a conditional use permit in September 2017, is under construction on a 1.6-acre section of private land and will provide 4G cell service by the end of the calendar year, according to Jeannine Braggs, Verizon spokesperson. Parents, however, are dismayed about the tower's close proximity to the school and say that they were not notified of the permitting application. Many say they only found out when they noticed construction beginning in July. 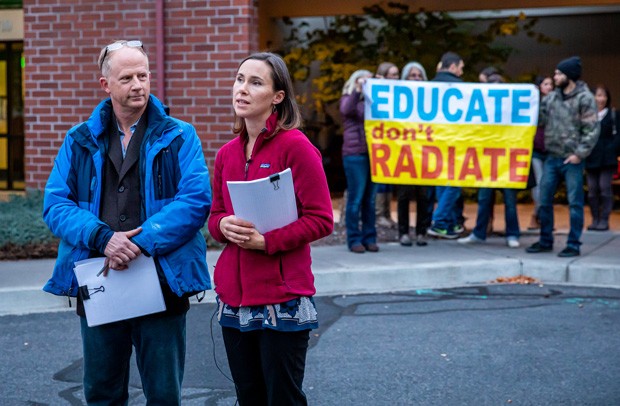 Last week, dozens of concerned community members, organized under the name Stop Cell Towers at Schools, descended on the Wednesday night Bend City Council meeting to voice their concerns over potential health dangers linked to radiofrequency radiation—the type of non-ionizing radiation used to send and receive cell signals. More than a dozen concerned members, mostly parents of children who attend Elk Meadow, used their 3 minutes of public comment time to present their case. Worries about radiation have been unflagging since the beginning of cellphone usage, though little research has been conclusive.

Parents argue that it doesn't matter.

"Best-case scenario is that the research is inconclusive," says Elizabeth Hanley Szabo, a parent to two Elk Meadow students. "And the worst-case scenario is research pointing to multiple forms of brain cancer, neurological issues, dizziness, tremors, depression and so on.... And I think that's too big of a risk to put something so close to our children that may pose a risk."

In April 2019, a California tower was shut down after four students and three teachers were diagnosed with various forms of cancer. Sprint, the operator, noted that the company didn't move the tower due to the cancers—which have not been proven to be linked to the tower.

At very high levels, RF waves can heat up body tissues the same way a microwave heats up food. Proponents against cell towers next to schools says that children are at a greater risk of feeling the effects of these RF waves, "because of the children's unique makeup," says Szabo, "Up to 10 times more."

In this case, the Bend City Council says its hands are tied because the appeal process has expired. The City did inform people of the land use permit, though only those within 750 feet of its location received the notice. Parents say they should have been notified and urge the Council to repeal and replace the city code which allowed for the permitting to go through without their approval.

“They have the ability to change laws that are outdated or not working in society’s best interest. And we as their constituents have the right and the responsibility to let them know when we see something wrong.”—Paul Bacon tweet this

"We intend to take our cause to state and federal authorities," says Paul Bacon, an Elk Meadow parent and media coordinator for SCTS, "but we don't believe the City Council should be left out of the discussion entirely just because they feel they've done everything they can within the law."

Though Bend Mayor Sally Russell made it clear on Wednesday that the issue was out of their hands, Bacon and Szabo both feel that Russell and City Manager Eric King could sway Verizon. "They are lawmakers," says Bacon, "and they have the ability to change laws that are outdated or not working in society's best interest. And we as their constituents have the right and the responsibility to let them know when we see something wrong. That is what's happening here."

Meanwhile, staffers from the office of Sen. Ron Wyden (D-OR) plan to meet with parents to hear their concerns. "I would be happy to have our staff get with them right away and follow up because we all want safe communities," Wyden stated. Cell towers are regulated by the Federal Communications Commission. City of Bend code lays out the general framework for the locations of these towers and encourages new towers to be placed in industrial or commercial areas, though federal law prohibits the City from completely banning them from residential zones.

The FCC maintains the amount of RF energy from towers at ground level is thousands of times less than the limits for safe exposure set by federal law. Still, critics point out that federal safety rules were put in place in 1996, when signals largely radiated from remote towers that were off limits to the public sphere. The FCC maintains that it would be highly unlikely to be exposed to RF levels in excess of these limits just by being near a cell phone tower, especially if antennas are mounted high above ground level and the signals are transmitted intermittently, rather than constantly.

The SCTS group says that this is the broader issue and want changes at the state and federal levels.

Bacon points to SB 283, signed by Gov. Brown this August, which declared an "emergency regarding wireless technology in schools, puts the entire state on notice that we have a likely health problem on our hands and we need to do everything we can to learn about and solve it." He points to the overwhelming bipartisan support it saw, passing unanimously in the Senate. "There is no red or blue in this fight," says Bacon. "This is a common cause in an otherwise bitterly partisan time of history."

Some European countries and municipalities, such as Belgium and France, have strict limits on electromagnetic waves, limiting the placement of wi-fi devices at schools. In some European districts, cell towers must be 1,500 feet away from schools.

"My personal experience has been that whenever I tell someone that a cell tower is being built directly next to my kids' elementary school, that person seems disgusted in some way or another," says Bacon. The group plans to continue to fight to get the cell tower moved to a minimum of 1,300 feet away from the school and urges the City to "Mediate a solution to the Elk Meadow problem by bringing all interested parties together to find a way to move the subject tower a safe distance from our kids' school."