Canning is a can-do activity, given the right ingredients and know-how

Canning the harvest should be a joyous and rewarding experience, but if you are in over your head it can be stressful and overwhelming, even dangerous.

Aspiring or novice canners should not wait for the so-called Harvest Season to get started. Midsummer is a great time to ease into the groove, work on your skills, figure out your game plan, and stock up on whatever gear and supplies you don't have, without the pressure of a mountain of produce. If you just do a jar or two here and there, you can keep skin in the game without breaking a sweat. 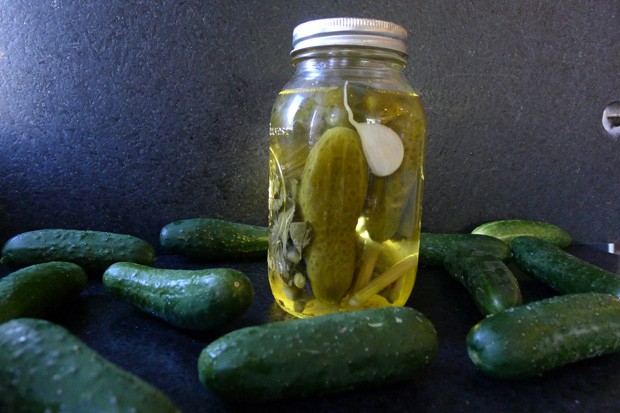 The Missoula Valley is home to several families of Belarusian immigrants, all of whom come from a town called Olshany. Known as the cucumber basket of Belarus, Olshany cucumbers are in demand as far away as Moscow. The cukes are grown in shopping mall-sized greenhouses, some of which are heated by as many as ten wood stoves in order to extend the season at both ends. The Belarusians brought their cucumber know-how to Montana, and their cucumbers, a small pickling variety that is sweet and juicy enough to eat like popcorn, have become popular for both pickles and fresh eating.

Some of the Belarusians sell pickles, too, and I bought some with high hopes, but they were disappointing. My friend, Valentina Andrusevich, was born in Olshany and has a stand at the market. I told her about those surprisingly underwhelming pickles, and she explained that the Belarusian pickles for sale at market won't taste like the pickles they eat at home, because food safety standards require more salt, vinegar and heat then the cucumber specialists care to subject their cucumbers to. "That is why I don't sell pickles," Valentina said.

I asked Valentina what she does at home.

"I pack the cucumbers into clean jars and I add all the spices. I put these jars in the oven at 350 for 25 minutes to sanitize them. While I do that, my brine is boiling. I pour the brine into each jar and seal it. Then I turn the jar over."

She inverts the pickles twice a day for the next two days, so they spend about half the time upside down. It's a way of compensating for the fact that she doesn't boil her pickles. It also distributes the spices, and the tannins from the horseradish leaves.

Boiling the pickles kills any lingering microbes that the salt and vinegar somehow miss. Bacteria or spores can sometimes hide out in air pockets inside dill flowers or elsewhere. Inverting the jars like this helps the brine make it everywhere it needs to go.

I brought a jar of four day-old pickles to market. Valentina opened the jar, stabbed a pickle with her knife, and chewed slowly, frowning. "You know, it's not bad," she said in her flat, Eastern European deadpan. 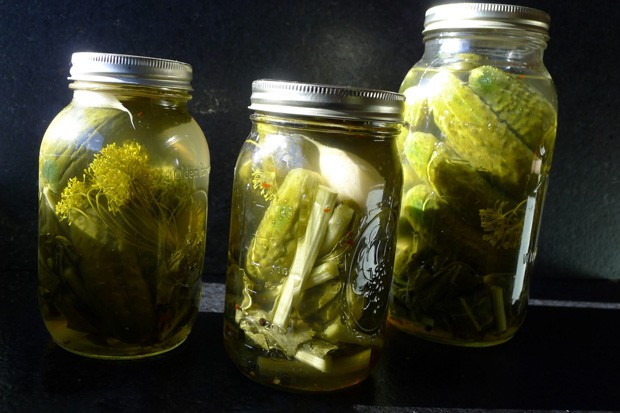 If you've been pickling your whole life like Valentina, perhaps you know the rules well enough to get away with breaking them. But new canners should take a more cautious approach and learn proper safety protocols. Ball Corporation — the company that produces almost all of the canning jars in circulation today — has a book out called "Ball Canning Back to Basics."

The Ball book begins with a section on the basic gear, ingredients and procedures involved in canning. If you don't know the importance of adjust acidity, account for altitude or measure headspace, you should find a reputable source of information like this book, or one of the many other educational resources in print and online.

Not surprisingly, the Ball book's recipe for dill pickles includes proprietary products like Ball® Salt and Ball® Pickle Crisp® Granules. You can, of course, use any kind of pickling salt. And you can skip those granules, or replace them with horseradish leaves — grape, cherry and oak leaves are also widely used for this purpose.

Curiously, the Ball recipe calls for "dill sprigs," but doesn't specify leaves or flowers. According to my sources, dill leaves alone won't cut it; there have to be flowers. The Ball recipe also calls for cutting of the cucumbers, which you don't have to do if you pick them small, Belarusian-style.

Most family recipes start like this, with a proven recipe. Little by little you make it your own. More pepper flakes, perhaps, or even skip the dill and use pickling spices.

Ultimately, there are many correct ways to can a pickle, and one rule to rule them all, a rule to which every canner who hasn't yet died of food poisoning will abide without hesitation: If the seal is broken, throw it a way. Don't even taste it.

Rinse the cucumbers under cold running water, and trim any that are longer than 5 inches so that they'll fit comfortably in the jar. Cut each cucumber lengthwise into quarters. Place the spears in a large, clean container (such as a 12- to 18-quart food-safe plastic pail or basin). Combine 1 gallon of the water and 6 tablespoons of the salt in a large pitcher, stirring until the salt dissolves. Pour over the cucumbers; cover and let stand at room temperature 24 hours. Drain; rinse under cold running water, and drain.

Combine remaining 1 quart water, vinegar, sugar, pickling spice and remaining 1⁄4 cup salt in a stainless-steel or enameled saucepan. Bring to a boil, stirring until the salt and sugar dissolve.

Place 2 of the dill sprigs and 1 teaspoon of the mustard seeds into a hot, freshly sterilized jar, and pack tightly with the cucumber spears. Ladle the hot pickling liquid over the spears, leaving 1⁄2-inch headspace. Add 1⁄8 teaspoon Ball Pickle Crisp Granules to jar, if desired. Remove air bubbles. Wipe the jar rim. Center the lid on the jar. Apply the band, and adjust to fingertip-tight. Place the jar in a boiling water canner. Repeat until all the jars are filled.

Process the jars 10 minutes, adjusting for altitude. Turn off heat; remove the pot's lid, and let the jars stand 5 minutes. Remove the jars and cool.