Dinner and a Movie

Dinner and a movie is a classic date night—but in the era of Netflix-and-chill dating culture, you may be lucky if your date invests enough time for just the movie, or just the dinner. Date nights for the time-strapped are one thing Ted Eady had in mind when he opened the Odem Theater Pub in Redmond in November. 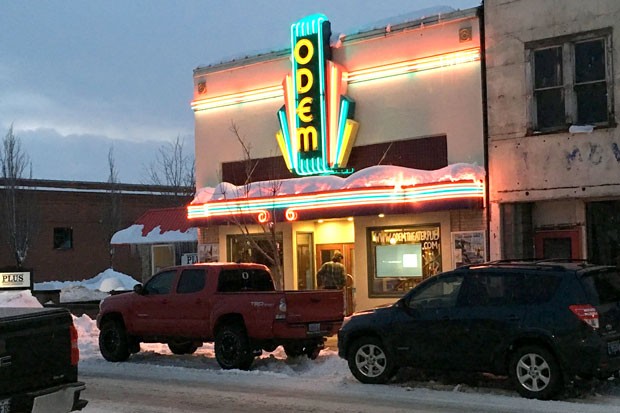 "I'm a busy guy," Eady said of his inspiration for opening the dinner theater, saying he figured there are people like him out there, who don't necessarily have time to devote to dinner and then a movie.

The cozy dinner theater offers a full menu of pub fare, set before you as you watch a flick. Regardless of whether you've come for a movie, diners can also opt to eat in the dining room, or on the ample patio with fire pits—both facing 6th Street, Redmond's increasingly charming downtown "main street." With the pub serving kombucha, cider and a host of local and regional beers on tap, as well as having a full bar, this spot can be on the radar of not only those looking for a date night, but also for those just looking for a spot to hang out in downtown Redmond.

The menu includes personal-size pizzas, salads, burgers, a Philly cheese steak, tots and fried mushrooms, as well as "healthy items" that include vegan flat bread, a portabello mushroom sandwich and a veggie burger. 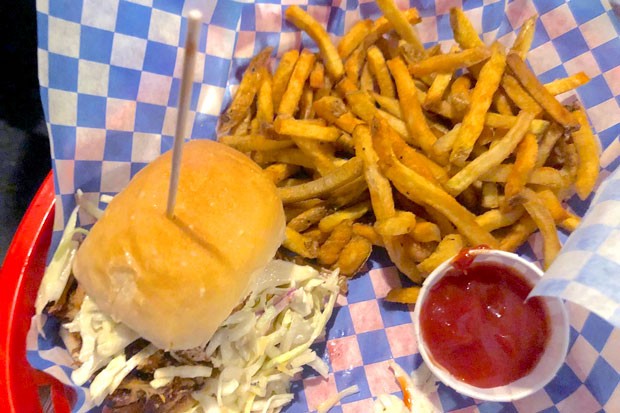 My date and I started off the evening with a pulled pork sandwich from the Finger Foods menu, served with hand-cut fries, as well as a classic pepperoni pizza. The pizza crust was on the thin side—which I like—with plenty of herb and garlic flavors and lots of pepperoni. The personal size was more than enough for one. If you're not overly hungry, one pizza should be enough for two people—especially if you're saving room for popcorn. The pulled pork sliders were delightful, heavy on the barbeque sauce, with a good amount of crunch from the fresh cole slaw added to each slider. Not able to sit through a movie without popcorn, we ordered a small halfway through the film—not disappointed with the buttery, movie-theater-style taste. Eady says he continues to play with the menu, planning to add more kitchen staff as the busy tourist season gets underway.

If you're eating while you watch a movie, metal trays can be affixed to bars in front of your seat—pretty handy when compared to some other dinner theater spaces, which offer only incremental tables, or worse, no space but your lap to place your food. It's just one of the customizations Eady has made to the space since buying the building back in 2001. Opened as a classic movie theater in 1937 by the original owners, Milton and Fossie Odem, that iteration of the Odem Theater was open until the 1970s.

Eady, who owns a number of buildings in downtown Redmond, says he started demolition of the space in 2015. At one point, he and his son uncovered the original letters spelling "Odem" in the basement and used them to have a new neon sign made for outside the theater. After some years of renovation, Eady transformed the Odem into two theater spaces seating 40 people each, with 17.5-foot screens. In the future, Eady says he may add a smaller, third screening room upstairs.

During our visit, we watched Jordan Peele's thriller, "Us," one of the bigger films featured at the Odem thus far. Eady, new to the business of working with film studios, says the process of working with the film industry and its myriad rules around screenings has been a learning experience. The theater offers a mix of big box office hits, along with indie films and documentaries.

With movie prices slightly lower than the big-box theaters—and with a full bar and a full food menu, Redmond has an option that might make Netflix and chill nights less appealing.