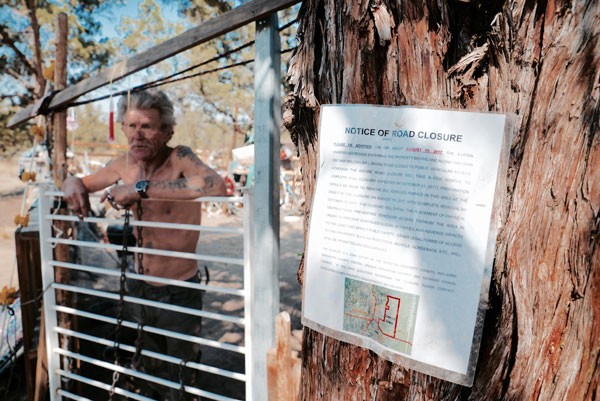 Estimates vary, but soon 200 to 400 people will be finding a new place to call "home," packing up their motorhomes, tents and tarps and hitting the road to find unoccupied land on which to settle.

Large boulders or physical gates sit at the head of two main roads leading to a swath of land on the outskirts of Redmond. A notice, posted on Aug. 15, explains to the people camping on the nearby land that the barriers are there to block vehicular access to the area.

For years, people have been camping on the land, east of Redmond, owned by Deschutes County (2,000 acres), Central Oregon Irrigation District (200 acres) and the Redmond School Board (50 acres)—but those residents will soon be gone, if the landowners get their way.

"The goal is to have the land vacated by October 31," said James Lewis, Deschutes County's property manager. "We are aware this is a highly sensitive issue and are therefore giving extra time to let them vacate."

"You've got two problems here:
How do you get them out of here?
And where do they go?"
It's a legality versus humanitarian issue."

The homeless population in the area has visibly grown throughout the past few years, according to volunteers who hand out water and propane each Monday.

"I have no idea where I'll go," says Art, a camper of three years, "or how I'll get there since my RV isn't registered, has out-of-state plates and I don't have a valid driver's license. I don't have the money to make it legal and I'll lose everything if I get impounded."

"At the end of the day, this is a land-use issue," says Lewis. "There's a point at which the impacts are so great to the land, that some action needed to be taken. We've received complaints for numerous years from the public and they have just the same right to use this public land...It's not a one-size-fits-all solutionbut this solution was the best idea." 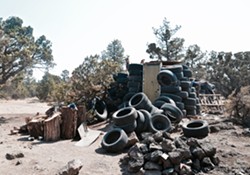 "The blessing in disguise
...we have been able to connect
with folks that we may not
have otherwise been able too...
... give them community resources
and access to mental health resources."

Lewis says the landowners decided to move forward, even after media pushback when the notice became public a few days early. "We spoke with and heard from multiple people including the Redmond Police Chief, Homeless Leadership Coalition, the City of Redmond, Bureau of Land Management and COID."

Lewis speaks not only of the prohibited long-term camping, but also of illegal dumping that he says has rampantly risen in the area in recent years. "You'll see couches, washing machines, you name it, it's out there," he asserts. "And it's not just the illegal dumping, but wood cutting and widespread firearm discharging. There's a real fire and public safety issue out there."

Two Sides to Every Story

irearms? What firearms? Most of us are felons and can't own firearms," argues Sharon, a two-year inhabitant on COID land. "Even if we did own a firearm, we would pawn it or sell it to survive." She disputes the notion that the homeless population is contributing to shooting and dumping reports. "Most of us don't have a car or drive. So do they think we're packing mattresses on our back? Or rolling our tires to our imaginary cars? That's the general public and we're getting lumped in. We've been respectful."

Still, Lewis says regardless of who it is, blocking vehicular access would stem the flow of garbage. "Ultimately all of those activities are tied to vehicular access to the property," he said.

"They've been lying since the beginning," says Sharon. "They said they wouldn't start until August 15 and they started blocking everything a week early." She taps her foot against a large dusty boulder now blocking a route that was once easy to navigate. The trails on these lands are dusty and sandy; filled with large ruts.

When I traveled to the encampment on Aug. 25, in a jeep driven by powerhouse volunteer Margaret King, we nearly became stuck several times. "How will these people get out?" King worries. "We can barely get out here in a four-wheel."

"Most of us don't have a car or drive.
So do they think we're packing
mattresses on our back?
Or rolling our tires
to our imaginary cars?"

Volunteers who have been working with the population for three years are pleading with COID and the county to reopen routes on certain dates in order to facilitate a smoother exit—though no such plan has been put in place. "Some of these guys need tow trucks to get out, otherwise they'll lose the only thing they have called home. Do we really want to do that to them?"

"You've got two problems here: How do you get them out of here? And where do they go?" says Ken Cardwell, another volunteer. "It's a legality versus humanitarian issue.... They could've taken the money they spent on that new City Hall and built a homeless shelter, you know? They're just passing the buck." Cardwell is referring to the $12 million, recently-completed Redmond City Hall.

When asked about using some of the 2,000 acres of county land, property manager Lewis says that due to zoning laws determined by the State of Oregon, opening a permanent homeless camp such as the Right 2 Dream Too camp in Portland isn't a current and available option. He also notes there has been a 2011 license with the Redmond Area Park and Recreation District and the Central Oregon Trail Alliance to develop recreational trails for biking, hiking and horseback riding that have not been able to be fulfilled due to the increase in conflicts. He hopes with the vacant land, those groups can develop the trails.

"We just don't have a solution for this issue," says Colleen Thomas, the homeless outreach coordinator for Deschutes County Behavioral Health. "It's a bigger conversation that needs to happen community wide and ultimately it lands with the fact that we need more services and better funding." Thomas has been visiting the camps for the past five months, saying from her experience, some people are, "leaving the area completely to Idaho, Washington and California, some are trying to move in with family, camp on BLM land, while other folks are refusing to leave."

Although the Source spoke to only a small portion of campers, most confirmed they were planning on leaving — "the difficulties come with how to move and where to move to," says longtime resident Art.

he blessing in disguise is that through this action we have been able to connect with folks that we may not have otherwise been able to have connected with and give them community resources and access to mental health resources," says Thomas. "Some folks have been isolated for years, so this event is showing some what else is available for them." Thomas says she's been establishing a rapport with residents, coming up with plans, sourcing new tires and getting them on waitlists for low-income housing.

"What I'd like to remind everyone is that we are all human. A lot of these folks don't have criminal backgrounds and have fallen on hard times. So hopefully this will raise awareness of the lack of resources that we have.... And will provide a bigger community discussion for better resources."

Thomas notes that anyone wanting to help can donate to charities such as Vincent De Paul, which aids the homeless with water, propane, food and clothing on a weekly basis. "Those are immediate impacts," she says, "and homelessness will never be solved. But more importantly, in my mind, is the long lasting effect, which is to treat these people kindly, and with dignity and respect."