Local tavern shuts down open mics while it sorts out licensing

Central Oregon is home to a host of weekly open mics that allow budding musicians a forum for playing in public. When the Source published a story about open mics in February, we counted at least nine regularly scheduled events at local taverns, bars and coffee shops. That number is down by at least one, after the M&J Tavern shut down its Wednesday night open mic this month due to a lawsuit filed by Broadcast Music, Inc., an international music rights organization. BMI's website describes it as the largest music rights organization in the U.S., representing artists, composers and music publishers and paying them royalties when their music is played publicly—including when their music is "covered" by other artists. 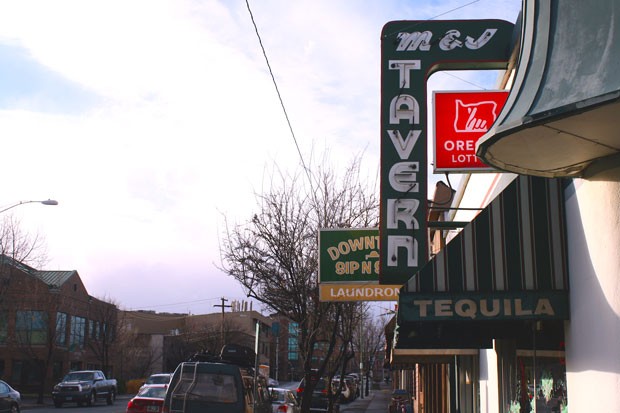 Jodie Thomas, executive director of corporate communications & media relations for BMI, told the Source Dec. 14 that BMI had filed a federal copyright infringement lawsuit against M&J, stemming from six songs that were played at the tavern on Aug. 10, 2016. That date was a Wednesday—the night M&J has long reserved for its open mic nights.

"Since January 2015, BMI made several attempts to contact the owners of M&J Tavern in order to educate them about the value music brings to their establishment, the requirements of copyright law, and the importance of maintaining a music license," Thomas wrote in an email. "This included more than 25 phone calls, letters and in-person visits."

The owners of M&J Tavern declined an interview with the Source, but wrote via Messenger, "We did receive a letter insisting on a cease and desist of music. We regret the abrupt displacement of our local community and family. The continued concern and support for our staff is deeply appreciated while we work past this confusion over our Wed. Night Open Mic and each amateur musician aspiring to learn their craft."

A license granting an establishment like M&J the right to play music from its repertoire of artists can "cost as little as $378 per year but can go into the thousands depending on the size of the establishment, the type of music being played (recorded, live, DJ, karaoke)," Thomas wrote.

While BMI claims that one of every two songs played on the radio is a BMI-licensed song, it

isn't the only music rights organization representing artists. Five rights organizations, including ASCAP, SESAC, Pro Music Rights, and SoundExchange offer services similar to BMI. If an establishment aims for full compliance, it may need to pay licenses to five organizations—exponentially increasing the cost of licensing.

To avoid the issues around compliance, some local establishments have adopted policies that require musicians to play only their own works. Strictly Organic hosts a Song Writers' Open Mic Thursday evenings, for example, which invites "experienced and brand new performers to play their original material."

Representatives from M&J told the Source, "We have a long list of musicians and bands that have started here who insist they are ready to bring Originals only. We are remaining open to all possibilities. However, even in this opportunity to further educate ourselves there are multiple accounts of harassment and threats from licensing companies claiming burden of proof lies upon the establishment, relying on their belief that eventually all bands/musicians do a cover." Because of that, M&J said it's keeping the open mic off the schedule for now.

The lawsuit against M&J is still pending, but "most of the time these types of cases are settled out of court," Thomas wrote.