Before starting a craft distillery in 2012, Chris Beatty was a partner in Trillium FiberFuels, a company focused on creating ethanol from grass and wheat straw. He studied the ryegrass plant because the company was in the Willamette Valley, the ryegrass capitol of the world. 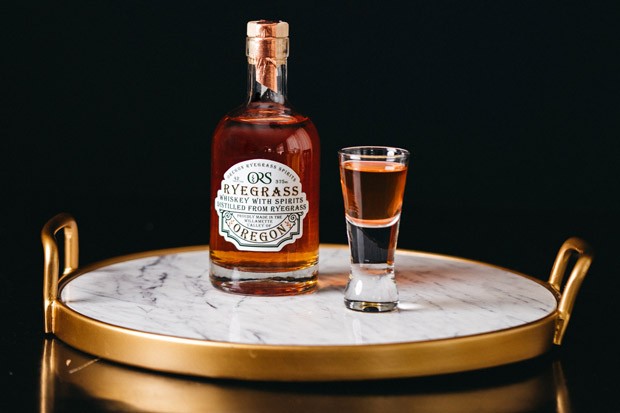 They'd learned that as the ryegrass grows, they could cut the grass before it had a seed head to elicit a decent amount of harvestable sugar. "We took some fresh grass cuttings," said Beatty, "and squeezed it like you would a wheat grass shot. It made the worst beer ever! The only natural thing to do at that point was to distill it." The result was earthy, with cut hay notes. Beatty thought it would make a really great blending component for whiskey. He shared it with some whiskey drinkers, and they were excited.

When the biofuel industry died after fracking came along, Trillium FiberFuels went out of business.

"I was mourning Trillium going away and I recognized craft distilling as a thing," said Beatty. His plan was to start a distillery, Spiritopia, and make liqueurs first, since they take less time to bring to market. He'd then produce whiskey in the long term.

To bring a new spirit to market, distilleries have to file paperwork with the Alcohol and Tobacco Tax and Trade Bureau—one application for the formula, the other for the product label. Several months after sending in the ryegrass whiskey formula application, Beatty received a one-line response, "Please submit evidence that ryegrass is allowed in human food." He was slack-jawed. "I contacted the FDA (Food and Drug Administration) and started talking to their officials," said Beatty. "They are like, well we don't really think there is a problem, but no one has ever made a food or drink out of ryegrass. You need to do a toxicology study. These take years and hundreds of thousands of dollars that I didn't have."

Ryegrass whiskey was put on the backburner. While at a liquor tasting, Beatty met Chris Lozier from Artisan Spirit Magazine, who was intrigued by the ryegrass whiskey story, so he wrote, "The Grass is not GRAS." Generally recognized as safe, GRAS is the FDA term for food and beverages approved for use. A few weeks after the article came out, Beatty received a phone call from a chemist at a pharmaceutical company. His company had been using ryegrass in a pharmaceutical. It turns out ryegrass has been used in pharmaceuticals for hay fever since 1939.

With this new evidence, Beatty was ready to go to battle. He wrote a new recipe and new formula, submitting his application without the evidence. It was approved on the first try. Beatty said he was happy but confused. He says the real moral of this story is that, "When you deal with a government agency, it's staffed by humans, not robots."

Beatty only has one cask of his ryegrass whiskey—so if you are interested in tasting it you'll have to visit the Spiritopia tasting room in Corvallis or at events he participates in. If you wait until June, you'll be able to taste it locally at The Bite of Bend.