Local politicians weigh in on the impeachment trial against the President

The U.S. House of Representatives was set to vote Wednesday on whether to impeach President Donald Trump, (just after this issue went to press). At this historic moment, we asked local city councilors and Bend's representatives in Washington, D.C. to weigh in on the proceedings. 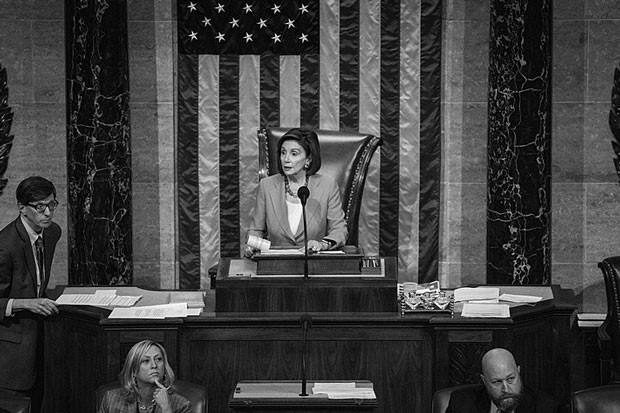 A quick impeachment primer: The House will likely vote along party lines Wednesday to indict Trump on two articles of impeachment, which will send the case to trial in the U.S. Senate. A two-thirds majority is required in the Senate to fire the President. If Senate Republicans maintain loyalty to the president, Trump will be acquitted and keep his job. This is the fourth time in history an impeachment inquiry has been brought before Congress, though no president has ever been removed from office through impeachment.

Trump is accused of pressuring Ukrainian President Volodymyr Zelensky, by withholding U.S. military aid, to open an investigation into former Vice President Joe Biden and his son Hunter, both of whom worked in Ukraine during the Obama administration. Joe Biden is a candidate in the race to become the Democratic nominee for President in 2020. Hunter Biden sat on the board of Ukraine's largest private gas company, Burisma, making up to $50,000 a month, according to The New York Times.

Democrats inside the Beltway are convinced they finally have a clear and easy-to-understand case to present to the American public to force Trump's removal from office.

The articles of impeachment are:

Obstruction of Congress: The president allegedly obstructed the impeachment inquiry by urging witnesses not to cooperate and government agencies not to comply with subpoenas.

Republicans argue that Trump acted in good faith by encouraging Ukraine to root out corruption and foreign influence in their affairs. They believe the impeachment proceedings are a dramatic ploy by the Democrats to remove a fairly elected president from office.

The public is also split in their support, with 50% of registered voters approving of the impeachment inquiry and 42% opposing it, according to a Dec. 8 POLITICO/Morning Consult poll. Republicans (81%) tend to oppose impeachment, while Democrats (85%) support the investigation and trial, according to the same poll.

"Politically and historically this seems to be the safest path—but is it the best bet to find a few wavering Republicans in the Senate to vote in favor?" he asked.

Nichols believes that a stronger case could have been made for "obstruction of justice" because Trump refused to cooperate with Robert Mueller's investigations into Russian interference during the 2016 elections. Trump opponents could have also established a case for "high crimes" in relation to bribery and even extortion in his dealings with Ukraine, Nichols said.

Sen. Ron Wyden—the Democrat who has represented Oregon in the U.S. Senate since 1996—believes Trump has already committed numerous impeachable offenses. Wyden is the son of Jewish immigrants who fled Nazi Germany, and has expressed outrage at the Trump administration's treatment of children and families at the U.S./Mexico border.

"I take an oath to uphold the Constitution and not to downplay the facts, and these are very serious matters and the founding fathers had it right up at the top of the list—the question of the executive putting their interest before our national security," Wyden said in a Dec. 16 interview with KTVZ. "My hope again is that the Senate addresses the facts. These are very serious questions, and there has been substantial evidence put on the record and I think to just go in there with all kinds of preconceived notions is wrong."

Oregon Sen. Jeff Merkley said in a Dec. 10 press release that a president soliciting foreign interference in an election was exactly what the founders had in mind when they wrote the impeachment process into the Constitution. "This process is part of the checks and balances intended to preserve the integrity of our democracy, our national security, and the foundational idea that nobody is above the law," he wrote. "Each member of Congress should search their heart, and ask how they would vote if the President was of the opposite party."

Bend City Councilor Bruce Abernethy told the Source he was "strongly supportive" of the impeachment process. "If one actually listens to the testimony that has been presented, it is quite clear that Donald Trump put his personal interests in the 2020 election in front of national interest related to the security of Ukraine, a country that has long been a U.S. ally."

Bend City Councilor Barb Campbell agrees, citing objections to Trump's alleged acceptance of emoluments from Americans and foreign powers. "I will be joining millions of other people across the country Tuesday for rallies making it clear we want the president, and his whole damn family, impeached," Campbell said.

U.S. Congressman Greg Walden is the Republican who represents Oregon District 2, the region that covers Hood River, Bend, Ashland and all of eastern Oregon. He did not respond to our repeated requests for comment, but said in a Sept. 25 Twitter post, "Americans deserve to get all of the facts—including seeing both the report from the whistleblower and the transcripts of the conversations former Vice President Joe Biden has had."

Knute Buehler, the Bend physician and former Oregon House member who's running for Walden's seat in the 2020 election, said in a campaign ad, "Nancy Pelosi and the D.C. liberals are obsessed with partisan impeachment to undo an election. It's wrong. I oppose impeachment and removing the president from office."

Bend Mayor Sally Russell was more vague. "As the Mayor of Bend, which is a non-partisan elected role, I will keep my personal opinion to myself," Russell wrote in an email. "However as a citizen of this country, I am pleased that a structure of checks and balances, created by our forefathers, exists to hold all elected officials accountable for their words and actions."

While City Councilors Justin Livingston and Chris Piper could not be reached for comment, City Councilor Bill Moseley said, "There are so many important local challenges to work on without bringing the national civil discord to Bend. I prefer to find ways we can work together on things like managing growth and affordable housing."