Do It For Your Mother | Chow | Bend | The Source Weekly - Bend, Oregon

Do It For Your Mother

Lutefisk, gelatin fish, and other stuff our families make us eat over the holidays 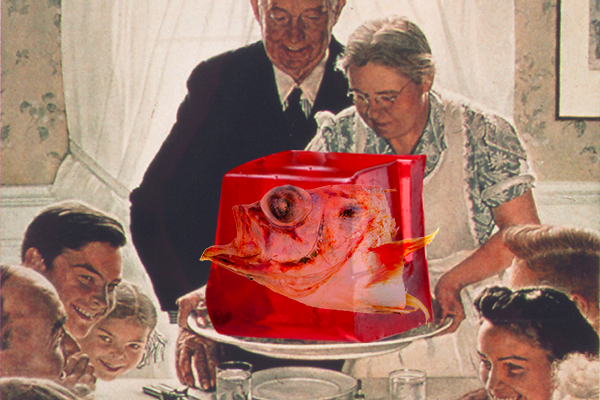 Picture in your mind a Norman Rockwell painting.

If you've ever pondered the #MAGA movement and wondered when, exactly, America was so "great," this could be an approximation. (True only in artistic form, but approximate nonetheless.) Don't ponder our slave-owning past. Push away thoughts of imperialism or Manifest Destiny. Just picture, if you will, the sight of a glowing turkey, presented by a woman who's been willingly working in the kitchen day. Ah yes, there you go.

Whatever the state of the world, many of us are about to sit down together to break bread (and glug down full glasses of wine in one gulp) with our families.

While the Rockwell turkey painting might be what comes to mind when we think of classic holiday dinners, the reality is slightly less... uh... glowing? In honor of the holidays, Source staffers share their odd, quirky, and sometimes downright torturous holiday food traditions.

If I were to estimate how long it'd take to explain the subtle delicacies, rules  dishes surrounding an authentic Polish European Christmas I'd say:
three liters of vodka.

One for each day of this long weekend.

Before anything begins, my mother digs out— from under the table, nestled in some hay (the "manger") a bit of flour wafer, opatek—and we cheerfully wish each other great tidings (health, winning the lottery, offspring if you're my mother and I'm me, etc) for the new year.

Due to Christ's penchant for taking fish and splitting it into seeming infinity, Poles don't touch anything that's lived and died on Christmas, Easter.... and every Friday? Fish is OK, though.

The vegetarian-cabbage-copious Christmas-eve dinner is the most solemn affair, with a whopping 12 different dishes. It's somber, maybe because we're all holding it in after stuffing our faces with bigos (cabbage and mushroom stew) or maybe it's  no one's drinking alcohol (openly). Or maybe it's because your Polish parents are glaring at one another from across the 12-foot table, weathering the culinary storm without vodka.

After four hours of sleep (because you've just shuffled to midnight-mass, opened presents and eaten blood sausage at your mother's request), Christmas breakfast begins and rains down deviled eggs, sauerkraut, pickles and pickled herring galore. A few hours later, your guts are rumbling from the onslaught of healthy bacteria, and Christmas dinner round two is upon us: The Meat Version. Day three is reserved for commoners, or as my mom calls them, "Magdalena's friends."

The arrival of the revered "Nozki w Galarecie," translated quite literally to "little feet in Jello," is a highlight for any family gathering. Though traditionally made from pigs feet, my mother spared us this version and instead got a whole fish—head n' all, smothered in peas and carrots, then frozen in a grayish Jello.  above for proof.

If Jello-fish ain't your thang, have no fear, you have other options... like  ("Greek fish" in tomato sauce),  ("little pigeons," though they're just cabbage rolls), perogies (dumplings),  (poppy-seed cake) and the deus-ex machina: . Maybe you think it's a dirty, no good,  with tiny little bones that provide even the seasoned eater with choking hazards, but Poles love it. And it's horrible unless it's fresh, so hence why  stories of families keeping 'em alive in their bathtubs before .. dinner. But then again, for day two and three you're slamming vodka, so the food or the freshness of the , doesn't really matter...

Is Aunt Robin bringing her bars?

Bring together more than three Minnesotans to watch the Vikes, play pinochle or just to have a "little lunch," and guaranteed, someone's going to make up a pan of bars. Think lemon bars, but with more cream than you knew possible.

There's a funeral coming, but is anyone talking about the deceased? Probably not. What they are talking about is which bars Aunt Robin is bringing to the wake. Will it be the caramel ones she brought to the American Legion omelet feed last year? Or maybe the chocolate ones she made for last month's meat raffle? It's anyone's guess. Whatever it is, those bars will be the talk of Blue Earth County for the rest of the winter—which is long.

Bars are a staple of Minnesota cuisine. Add in a side of summer sausage, the Swedish lutefisk that no one wants to eat, but will do so out of "tradition," and a (no, that's not referring to the date you're surprising your parents with at Christmas dinner, and no, it's not called a casserole) and you're all set.

Now the big question is, who's going to call Grandma out for cheating at cards?

Growing up in Montana, my family would often spend part of the holidays with my Great Aunt Beverly. All five of my great aunts and my grandma on my mother's side loved to cook. Between the yodeling and organ playing, my great aunts would cook up dishes that, while perhaps not unique to the plains of Montana, were definitely unique to their generation.


I remember quite vividly being very weirded out by what my great aunts considered a pistachio salad. It was, in fact, not a salad at all—but something akin to Ambrosia salad (note: also not a salad).

The concept of eating a side with dinner that is almost entirely constituted of marshmallows, pistachio pudding whipped cream went against what I had learned as the proper order of meals, in which dessert was to be eaten last. If you haven't tried it, it is delicious—and a staple during the holidays for my family, even after my great aunts have passed away.

Our holidays are all about cookies! There are from my dad's Polish side of the family, with a light cream cheese cookie base that wraps around raspberry or apricot pastry filling. The cookies are light, fluffy and melt in your mouth. I love the pop of tart, sweetness from the fruit. My mom makes them by pinching two sides of the square dough together so you can see the filling. My grandma made them like a little package with all the corners pinched.

We also have German dolly cookies shaped like little people, boots diamonds from my mom's family. Dolly isn't the real name, my great grandma made it up—probably so we could pronounce it. Dolly cookies are like a crispy shortbread topped with caramelized sugar and ground walnuts. With a dough that includes hard-boiled egg yolks, I've never found another recipe it. When I told my mom I was writing this, she said, "Don't share the dolly recipe!" My lips are sealed.