Do Your Elf a Favor and Journey to the New Kobold | The Source Weekly - Bend, Oregon

Do Your Elf a Favor and Journey to the New Kobold

It takes a bold character to take on the biggest brewery in the region, but that's what Kobold Brewing has done in opening The Lair—the new Bend taproom of this Redmond-based brewery—directly across the street from the Deschutes Brewery Public House. OK, maybe Kobold isn't trying to take down Deschutes (especially considering the former brews in a year about as much as the latter brews in a day), but The Lair does stay open until 11pm. when the Deschutes pub closes at 9, so it has the potential to sell more beer during those two hours. 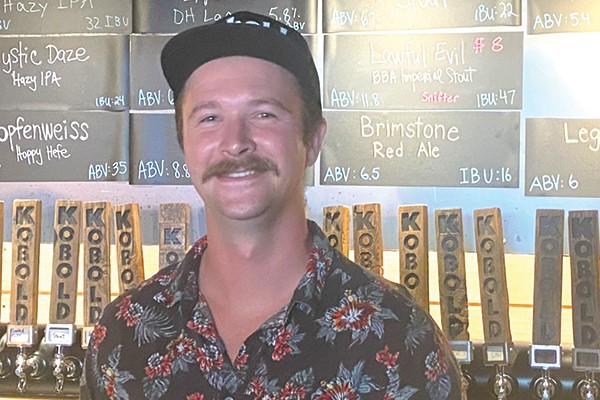 Named for a mythical Germanic creature—actually, a spirit—believed to help perform chores in a home or, more crucially, a brewery, Kobold was founded in 2015 in Steve Anderson's basement. The Vault, as its Redmond taproom is called, just celebrated its fifth anniversary. Last year, Anderson sold it to Hayden Reynolds and other partners. Reynolds, a Summit High School graduate who went on to study environmental engineering, had been brewing at Worthy but dreaming about owning his own. That's when he noticed Kobold was listed for sale. It helps that Reynolds, who sports a moustache that has the potential to be fabled, is huge into Dungeons & Dragons and other role-playing games and loves all mythical realms.

"The name Kobold perfectly encapsulates the mystical vibes that I find fun," said Reynolds as he extended a pint of Hyperborean Dry Hopped Lager.

Named after a different role-playing game, the lager is a Lair exclusive. Kobold brews in 10-barrel batches and has 20 taps in Redmond, but offers 30 in Bend. Reynolds finds that regulars at The Vault keep to the same few beers while Bend's newfound clientele spread out the love for broader styles and flavors, from Dwarven Stout to Pirate Dwargstof's Hazy IPA. The walls of The Lair, it should be mentioned, are adorned with plenty of found, magical artifacts from the world, the sea world and potentially worlds beyond.

“The name Kobold perfectly encapsulates the mystical vibes that I find fun.” —Hayden Reynolds tweet this

The one beer exclusive to Redmond is Shattered Pallet Oak-aged Red Lager. If that tasty, malt-forward lager isn't compelling enough to journey to Redmond from Bend, then the blueberry-brisket tacos from Westside Taco Co., the food cart stationed there, certainly are.

The Lair currently offers sandwiches, but coming soon the kitchen will boast a pizza oven and fryer to offer an expanded food menu. Its owners also applied for a liquor license to add a few select cocktails to the bar.

"We get a crowd that wants that late-night but not big-party bar. We offer lots of games and there's a deck of cards at every table. We want people to come in and hang out for game night," said Reynolds. (I proposed hosting a backgammon night, but maybe there's a reason taprooms generally offer darts and cornhole or host trivia nights.)

In addition to enjoying a pint or two over board games, Reynolds wants customers to interact with the quest board. It's something he's developing that may be as ornate as taking a picture drinking a Kobold beer atop South Sister (as one example) or maybe it'll entail geocaching, which he also hopes to set up. That's because he'd like to see us all have more adventures— whether that means exploring the magical areas that naturally surround us or perhaps hoisting a pint with The Lady in Green, the alleged ghost of Bond Street. In fact, Reynolds reports that a bartender cleaned and closed up one night and, though The Lair is just a month old, opened up the next day to find a broken pint glass in the middle of the pub. But maybe that was just the kobold enjoying the fruits of its unseen labor.