How to train a furry first mate to master the paddleboard

When learning new sports, jumping right in can be the best method—trial by fire, as it were. Such is the case with training fur babies to passenger aboard paddleboards.

My first furry mate was an Aussie and German shepherd mix. Mic had a low center of gravity with short legs and a thick torso—which are advantages on a paddle board. Disadvantages were his reluctance around water and independent spirit. 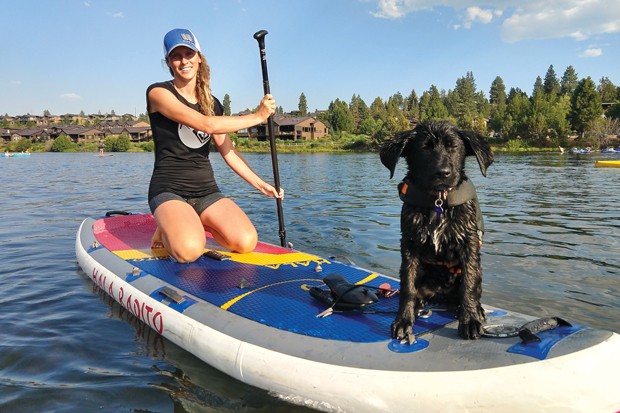 Read on for the seven S's—the training tips Mic helped me learn.

Is your dog a little shy around water? No problem. If they are fetch-motivated, throw a stick or ball in the shallows of a waterway. Initially, keep the tosses easily reachable from dry land. Progressively throw the toy into deeper water. Find the zone where your pup hesitates and continue to throw the toy just short of that demarcation, so your pup can confidently challenge themselves to keep getting in the water. Eventually, throw the toy back in the hesitation zone. It may take a couple trips to the swimming hole, but at long last, your pup will swim. Relish the moment together.

This progression is a three-phased approach to getting your pup to sit at ease on your board. In the first phase, you let the pup suss out the board. This can happen in many formats. For Mic, he wanted to watch me paddleboard for a while before he would come near the board. To allow him the full space he needed to get curious about approaching the board, I took him to Elk Lake, where he followed the land perimeter as I paddled near the shore. Whenever I came on land, he would come sniff the board, wondering what it was. In due course, he got on the board on land of his own volition. 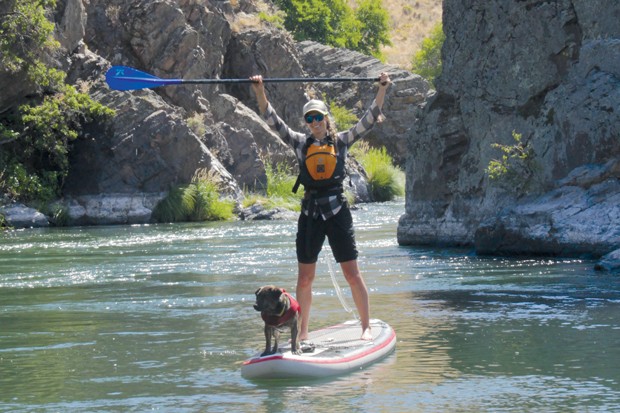 When your pup starts to explore your board, it's really important you let them discover for a while without correction. You don't want them associating anything negative with paddle boarding.

The next phase is training your pup to sit on the board with you, still on land. This may come after several outings stagnating at phase one. Maybe you sit in the sun on the board or take a nap—these can be great ways to integrate puppy and board. Finally, try standing on the board and having your pup stay in one place on the board. Even pretend like you are paddling; this helps pup know what to expect when it's time for the real thing. Be consistent with commands when you move from land to water.

You'll know your pup is ready for the real thing because they will give enthusiastic consent. They'll approach the board on the water and show you they're ready. The more time you spend on land practicing, the more seamless the transition from land to water will go.

I didn't mention it above, but snacks are a critical part of each phase of training mentioned. I like to start with milk bones (organic tiny ones) for swim practice. When we move to the board, I up the treat ante a little to something more special. Once on the water, I like to use a treat that is fragrant (so pup knows it's in my pocket) and so special, pup only gets it when they are on the water with me... You guessed it - beef jerky!

Rome wasn't built in a day. Do you remember the first time you got on a paddle board on water? Remember how shaky you were? Remember how much better you've gotten over time? Your pup is going through the same process... It's possible you have a one-in-a-million pup with instincts to paddleboard that are ready to go without much persuasion. If this is the case, good on you. But if you're like the rest of us, be patient, it will build a good foundation for the many adventures you will eventually have on the water together!