Central Oregon's inaugural "Dog Jog" event happens at the Deschutes County Fairgrounds this Memorial Day weekend. The racing style is officially known as Canicross and pairs runners with their dogs for a one-of-a-kind cross-country team. 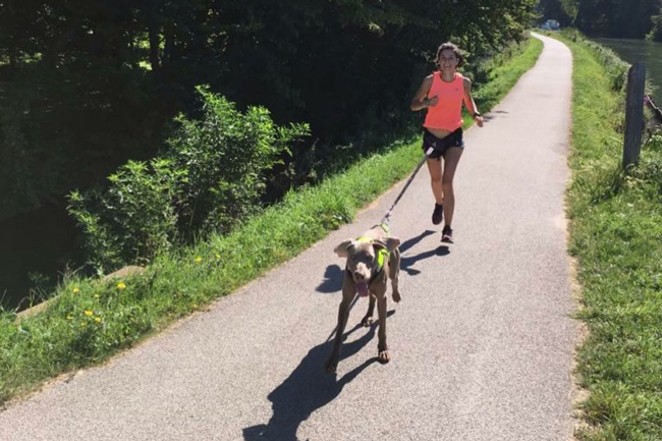 "Getting the whole idea of Canicross across to people has been a bigger challenge than first anticipated...we call it the dog and jog just so it's more inviting to everyone," says Lauren Stegmaier of Alpine Outfitters, a dog wear brand that specializes in active dog-wear. Canicross is designed as a way for sled dogs and owners to train during the off season. The race style is popular across Europe, Canada and parts of the U.S., but has yet to catch on on the West Coast. "Bend is known as Dogtown USA, so what better place to bring Canicross?"

The event features three different races with 5k and 1-mile options for adults, as well as a 400-meter kid race. Although there is special Canicross equipment made for racing, all that is required for the Dog and Jog race is a leash and a well-behaved pooch.

"If [runners] put on a harness [and dog] around their waist they could take 20 seconds off of their mile just 'cause the dog's going to propel them. And that's what makes it so fun," Stegmaier describes.

Proceeds from the race go to Big Brothers and Big Sisters of Central Oregon. There will be plenty of food and drinks for after the race as well as live music. Street Dog Hero, Three Rivers Humane Society and Pearson Paws Rescue will be present for adoption and rescue inquiries.