Don't Get Those Lululemons In a Twist | Outside Features | Bend | The Source Weekly - Bend, Oregon

Don't Get Those Lululemons In a Twist

How beer yoga can aid in your pursuit of hoppiness. (See what we did there?) 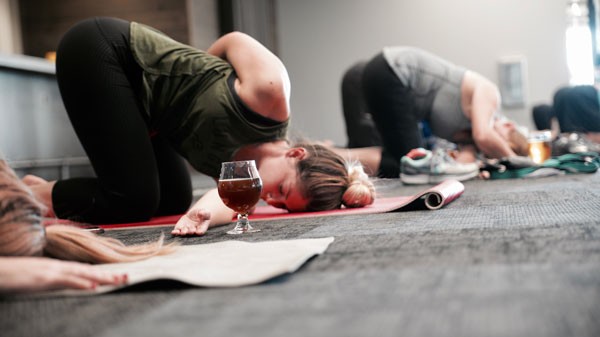 n a past life I was a yoga teacher.

If a past life was measured in years, and those years were three.

You know, one of the snobby, Lululemon pant wearing, "I can't believe she didn't give me 10 minutes of full savasana" complainers. Or the huffy, "I just can't find a Hatha class that gets into my deep-six muscles you know?" So when I saw an ad of a smiley girl in pigeon pose, cradling a pint of beer over her head as some sort of holy grail, I was dubious.

To say the least.


...my perceptions changed.
And no, it isn''t because I'm wearing beer goggles. 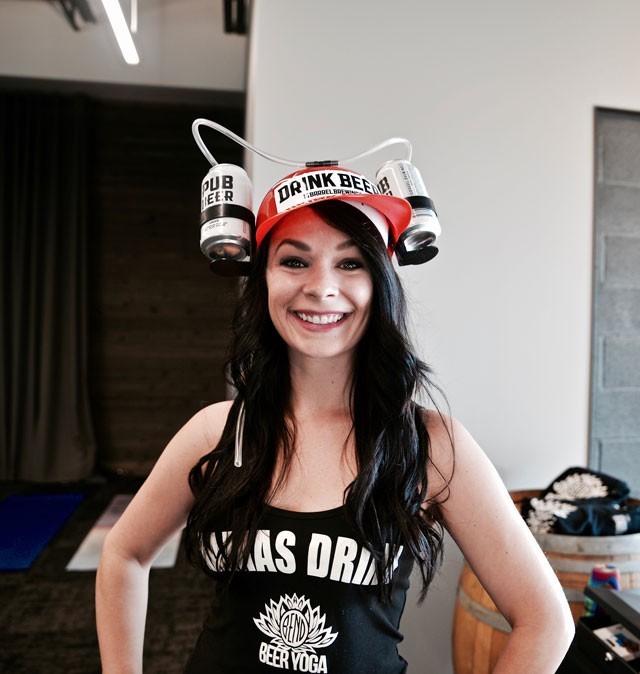 When I first meet Cady Lindsey she's wearing a two-beer Homer Simpson-esque drinking helmet with plastic straws dangling from her lips. "Welcome to beer yoga!" she exclaims, with a genuine smile as she readies the space for class. "Grab a pint and get loose! Namas-drank!"

Clearly not one to take herself too seriously, Lindsey, the founder of Beer Yoga, is not actually a yoga teacher—but rather an entrepreneur who saw a need to fill.

er classes, taught by certified yoga teachers and held at various breweries, are meant to be fun, monthly events linking together light exercise with tasty brews. "I have seven instructors in my arsenal, all with very different personalities, styles of teaching, music and drink choices," she says, noting that instructors do not have to drink beer in order to teach her class.

The session I attend is a slow flow class, scattered with "drink pauses," such as one in which we hold our frothy pints overhead, in a crescent moon pose. Giggles abound, but, hey, you can actually feel the side stretch. Teacher Abigail Cox is good at weaving together the poses with these pauses, so it doesn't seem like too much of a reach to sip on an ale while performing trikonasana. Cox, a registered Hatha teacher, is both knowledgeable, quirky and funny during the 60-minute session.

I later ask, "What you're favorite part of teaching beer yoga, I ask?"
"The puns."
My kind of girl. Amid some pushback from a few yoga die-hards, Lindsey wants to make three things clear about beer yoga:

1. Beer yoga is great for those wanting to try yoga but may be too hung up by the plethora of 65-year-old women who look better in spandex then you do.

2. Beer yoga is a great networking place and place to unwind while sipping on your favorite brew, and,

3. Beer yoga is not meant to be taken seriously.

t's a gimmick," she says as she stands off to the side of a class already in session above 10 Barrel's newest eastside location, "It's not meant to be serious. It's meant to be a fun way to try out yoga." I give silent kudos to her blatant honesty, possibly spurred on from all those beers she's been sipping on.

Indeed, in a town where we have to count on both our hands and feetto tally the number of micro breweries, it is an amazing feat that beer yoga hasn't sprung up sooner than this past fall. I mean, naked yoga hit studios earlier this year, and ganja yoga, I'm assuming, is just around the corner. And if you're having trouble reaching those toes, then beer yoga will probably aid you in accomplishing that feat.

"I'm not bothered by these things. I don't judge them either. I know what yoga is for me personally and I think it's funny what's happening." - Deepak Yogawala tweet this

"I've always wanted to try yoga but was too scared, so I thought the beer would help limber me up," says one 20-something male attendee. "I do yoga, but I wanted to relax and unwind from a busy day," said another. I meet two women who have just both moved to Bend and say they wanted to meet new people and they thought this would "be a great place to do it." 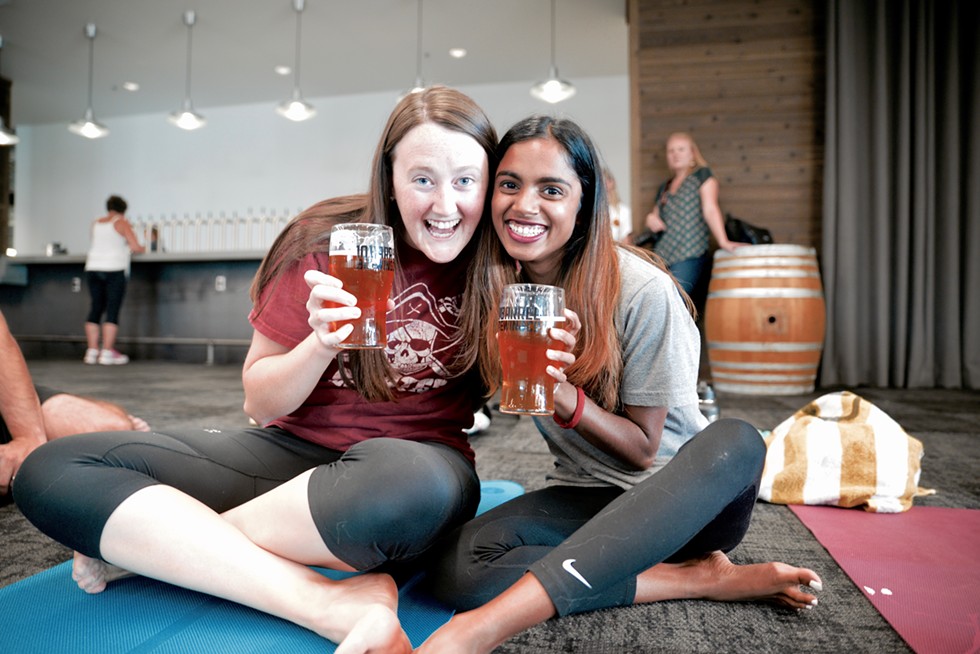 Once the class finishes, attendees are beaming, some with a slight twinkle in their eyes. It may be the savasana, or the beer—as there was a midway break to refill. "I'll definitely do it again," says the yoga beginner, "especially if it's held at different breweries. It's like a yoga pub crawl."

Yes, serious yoga die-hards will hate the consumerism and beer drinking this event meshes together. They'll hate the pumping electro music mixed with Drake hits. Or they'll hate the fact they didn't think of this idea first.

But when I ask my yoga teacher, Deepak Yogawala, who was born, raised and lives in Goa, India, what he thinks he replies, "I'm not bothered by these things. I don't judge them either. I know what yoga is for me personally and I think it's funny what's happening."

So the mantra is then, don't worry, beer happy. It's your practice after all. Who are you to judge?