In a three-hour period, cops wrote 28 citations for cell phone use 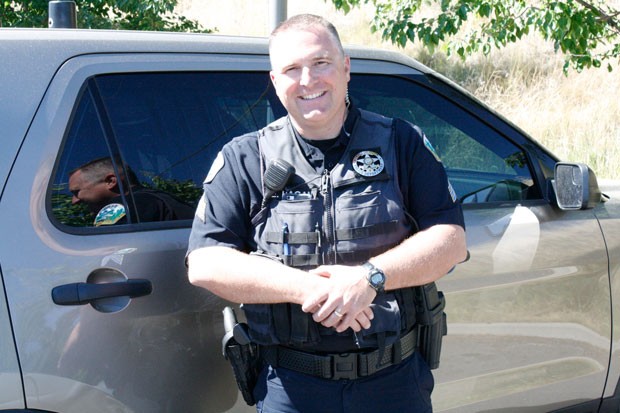 I rode shotgun with Sgt. Eric Hagen of Bend PD through the three-hour tour, which yielded 28 citations for operating a motor vehicle while using a mobile electronic device, six warnings for the same infraction and 14 warnings for other observed traffic violations.

Hagen and I, along with other officers in police SUVs, motorcycles and cruisers, posted up at the intersection of Southeast Ninth Street and Wilson Avenue in the blazing 90 degree-plus heat.

The sting got off to a slow start before Hagen handed out his first $265 ticket for talking on a cell phone—the second ticket the driver received in a week—the spotter was calling out drivers as fast as the officers could complete their stops.

The reaction Hagen received when stopping drivers were as varied as the drivers themselves. The first person was visibly angered by the fine. His large truck was shaking from side to side as he tried telling the sergeant his work depended on talking on the phone.

The next driver we saw passed the police SUV with their head down, clearly staring at the phone's screen. Hagen pulled in behind the car, but waited to pull the driver over to see what, if any, other infractions they might commit. The car almost went into the bike lane, causing Hagen to remark that if a rider were there, we'd have a different situation on our hands. The female driver was friendly—you could see her smile in the side-view mirror—as she explained she was using the phone's map feature.

Hagen has the demeanor of a nurse when he approaches the drivers. As he put it, he treats people the way he'd want someone treating his parents or his children. He didn't ticket everyone we stopped, even though he could have. For example, he gave out a warning for construction workers whose company rig had trailers without working lights.

During the previous distracted driving detail, Hagen said the officers couldn't keep up with the spotter calling out infractions. This time was slower, Hagen said—perhaps a sign people are getting the message that driving distracted is serious.

According to the National Highway Traffic Safety Administration, in 2016 there were 3,450 deaths and 391,000 injuries associated with distracted driving. The NHTSA says there are approximately 481,000 people using their phone while driving during daylight hours. In 2015, data from the NHTSA shows drivers in the 16 to 24 age group are considered to be the most distracted. According to the data, 4.6 percent of drivers in this cohort drive with phones to their ears and 4.9 percent were found visibly manipulating handheld devices.

So why does all of this matter? There are arguments across the board that driving while using your cell phone is no more distracting than arguing with a passenger, or fiddling with the radio.

But get this: in July 2011, male teen was riding his bike on the sidewalk adjacent to Southeast Reed Market Road. At the same time, cops say a La Pine man was driving his full-sized truck, pulling a trailer—and texting in part to the person sitting right next to him. In his distracted state, the driver didn't see the car in front of him stop, so he tried to avoid the car, but instead crashed directly into 16-year-old Forrest Cepeda, killing him.

The driver, Erik Conn, was sentenced in 2012 to more than two years in prison for the accident and had his license permanently revoked.

Cepeda's memory will live on due to the memorial sign on Reed Market that reads, "Don't Text and Drive." Cops in Bend hope people will heed its message and avoid another tragedy.

According to the National Highway Traffic Safety Administration, in 2016 there were 3,450 deaths and 391,000 injuries associated with distracted driving