It's not uncommon to witness the sight of someone top roping a rock face on Smith Rock—but even in a region known for its outdoors scene, seeing someone rappel down Bend's highest building is a rarity. It might very well be the first time anyone's seen it, in fact.

According to the United Way of Deschutes County, it's bringing a "first of its kind" sight to Central Oregon this weekend, by way of its "Over the Edge" fundraising event. In it, community members will rappel from the top of the Oxford Hotel—a 7-story, 70-foot tall building—while a street party takes place below. It's a little different than your average day at Smith Rock. 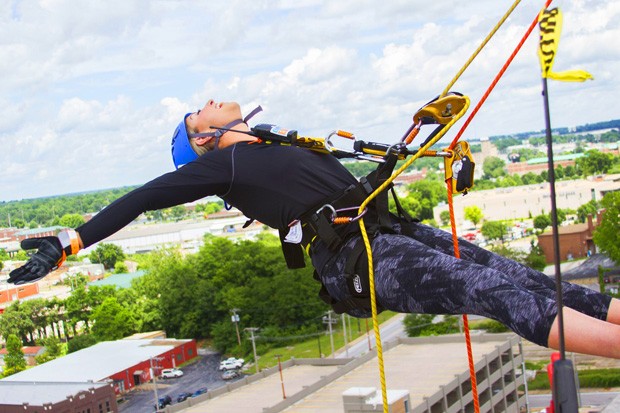 The idea behind this Over the Edge—an idea that's been replicated among non-profits across North America—is that rappelling from that height may be scary, but not quite as scary as it can be to face the daily challenges faced by some of the area's most vulnerable. Local people—which include KTVZ's Bob Shaw and Mike Allen, as well as local DJs Austin Reed and Dave Clemens—have been raising funds on behalf of the United Way over the past several months. In exchange, they'll get the "privilege" of sporting helmets, harnesses and other safety gear to face their own fears and go off the side of a building.

"Even though I had done some rock climbing, it was certainly more exhilarating than I thought it would be, from five stories up." - Diana Fischetti tweet this

"I have rappelled off the roof of a building when I went through structure fire academy 10 years ago," said Diana Fischetti, director of development & marketing for United Way of Deschutes County. "And even though I had done some rock climbing, it was certainly more exhilarating than I thought it would be, from five stories up." Since the Oxford is two stories higher than that, it's sure to be even more of an adrenaline rush, Fischetti said.

"When you're standing on the edge of a building and you have to trust the system, it can be scary," Fischetti added.

Down below will be a "ground party" that will close NW Minnesota Avenue and NW Lava Road for part of the day, including food carts from Pizza Cart, Dump City Dumplings, 10 Below and Kona Ice, kids activities and a beer garden from Sunriver Brewing Company, Avid Cider and Humm Kombucha.

Over the Edge is a spectacle that's gone on nationwide, and in Canada—even taking place on buildings as high as the 42-story U.S. Bancorp Tower—also known as Big Pink—in Portland. But in each community where Over the Edge happens, the money raised goes back into the community that brought it in. Through its fundraising, United Way offers grants to other local non-profits, collects data on needs in the community and helps incubate new programs.

And while some of the people involved have been using the past several months to meet their fundraising goal of $1,000 for the opportunity to rappel "over the edge," anyone can show up on the day of the event, donate $1,000 and get to rappel that day, Fischetti said.