October 01, 2021
3 comments
Deschutes County District Attorney John Hummel announced that Ian Cranston was charged with the crimes of murder in the second degree, manslaughter in the first degree, manslaughter in the second degree, assault in the first degree and two counts of unlawful use of a weapon in the shooting of 22-year-old Barry Washington on Sunday, September 19. The Bend Police Department arrested Cranston Thursday evening on a no-bail warrant, after a grand jury indicted Cranston.

Hummel said Cranston shot Washington after he complimented Cranston’s fiancé, leading to a brief scuffle between the two. Washington was arguing with one of Cranston’s friends when he was shot. Bend Police Department arrested Cranston shortly after for second degree manslaughter, and he was released after paying 10% of a $100,000 bail on Sunday. Washington’s family and many community members were outraged with Cranston’s initial charge of manslaughter rather than murder, and that he was freed hours after the shooting. 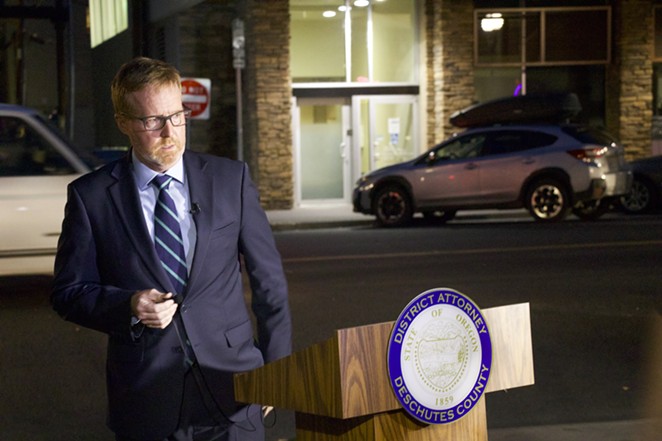 Hummel said he’d received hundreds of calls and emails over the past week regarding parallels the case had with the history of racist violence in America, namely the murder of Emmett Till.

“Our country has a disgraceful history of denigrating, prosecuting and lynching Black men for talking to white women. Over the last week, literally hundreds of people called and emailed me to remind me of this history. I responded to every one of you,” he said. “Racism didn't only happen back then. And down there. It happens right here. And right now.”

"If we obtained sufficient evidence to prove that this shooting was at least partially motivated by race, we will go back to that grand jury and ask them to add the charge," John Hummel tweet this
The grand jury did not charge Cranston with a hate crime, but Hummel said there’s an ongoing investigation of Cranston’s motives. He said the public has been helpful collecting evidence, particularly the activist group Central Oregon Peacekeepers, and asked anyone with relevant information to send it to his office or Bend PD.

“If we obtained sufficient evidence to prove that this shooting was at least partially motivated by race, we will go back to that grand jury and ask them to add the charge. I determined we did not have sufficient evidence at this point to present it to the grand jury,” Hummel said. “That was a tactical decision made by myself. If we presented it now and the grand jury said no, the state doesn't have enough evidence, then that case is done. And if we gathered more evidence later, we couldn't go back.”

Cranston’s arraignment was scheduled for Friday at 1:30 pm.

Cranston's plea hearing was scheduled for December 6 during his arraignment on Friday afternoon. His lawyer said they are ready to enter a not guilty plea, but Deschutes County Circuit Judge Beth Bagley said that isn't decided at arraignment.

The arraignment was played on loudspeakers outside of the Deschutes County Courthouse to a crowd. A disturbance erupted between activists and Central Oregon Daily News over their airing of video of the shooting provided by Cranston's fiancé. Activists and community members criticized the news station for releasing the video without permission from the family. They deleted the video off their website on Friday.