A new Oregon Coast book inspires us to look ahead to better, beachier days

April 08, 2020
comment
We can’t travel yet, but we can dream. In this excerpt from the new book “Day Trips to the Oregon Coast: Getaway Ideas for the Local Traveler,” by Bend author Kim Cooper Findling, take a mental trip to Astoria, the northernmost city on the Oregon Coast.

Astoria is the oldest American settlement west of the Rockies. In other words, it’s not only the oldest town on the Oregon Coast, it’s the oldest in the state and even the entire West Coast. At the same time, it’s a forward-thinking and surprisingly hip little city with great culture and dining options. The proximity to Portland means a sense of modernity and cool that, coupled with Astoria’s incredible natural beauty, makes this city a charming, atmospheric weekend getaway with many wonderful surprises.

Perched on the Columbia River at one of its widest points, and with two tributary rivers winding around the city limits, Astoria is a hilly city dominated by watery views. The town sits on a steep peninsula, and the 360-degree views of the ocean, rivers, and temperate rain forest that surround Astoria are incredibly beautiful.

Astoria was the first permanent U.S. settlement on the Pacific coast, but eventually, Portland, Seattle, and San Francisco surpassed Astoria as the West Coast’s main port cities, and Astoria was left to thrive quietly on the pursuits of fishing and logging, albeit with plenty of leftover historical charm. History is all around you in Astoria, which even before the fur trappers was the place that Lewis and Clark over-wintered on their overland journey in the early 1800s. Astoria has more historical markers than anywhere else in Oregon, and, in a state that isn’t very old and on a rugged coastline with weather that doesn’t always treat buildings kindly, Astoria is known for historic architecture, including hundreds of Victorian homes and a revitalized 1920s-era downtown.

Today, tourism is a primary industry. Lovely shops, all kinds of dining and many museums dot downtown, which clings to a waterfront that once bustled with salmon fisheries. Walking the Astoria Waterfront is a great way to take in the sweep and scope of the Columbia River. Visit Maritime Memorial Park, the 6th Street Viewing Platform, the 14th Street Pier, and the 17th Street Dock to become familiar with Astoria, a vibrant small city alive with a spectacular landscape, rich past and classy culture.

Astoria Column. For the best view in town, drive up to the top of Coxcomb Drive and then climb another 165 steps on foot to the top of the Astoria Column, built in 1926. Stunning views of the Columbia River to the north, the Cascade Range to the east, and the Pacific Ocean to the west wow those willing to test their lungs with the climb up the winding staircase. 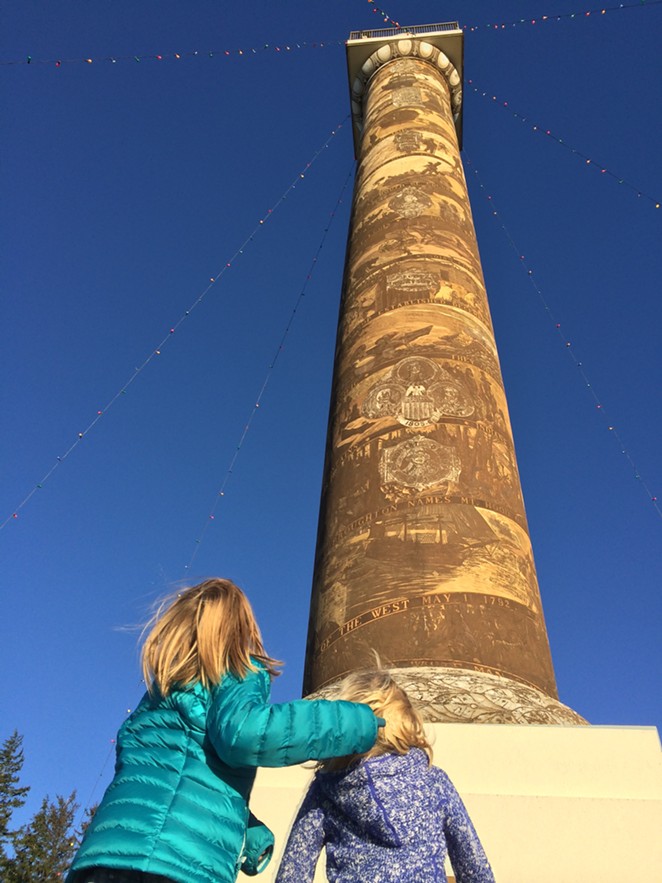 Columbia River Maritime Museum. Brave souls have been tackling the oceans and rivers by boat for hundreds of years. Here, explore marine transportation from the age of dugout canoes to sailboats to the present. Take an exciting look at the legendary Columbia River entrance, where the forces of the mighty Columbia and the Pacific Ocean meet, creating waves that can exceed 40 feet during bad winter storms.

Oregon Film Museum. Astoria’s beauty and architecture have attracted many to the area, including filmmakers. To celebrate the 25th anniversary of the Steven Spielberg film The Goonies, the Oregon Film Museum was born in 2010. Housed in the historic Clatsop County Jail, which was featured in the opening scene of The Goonies, the museum is dedicated to preserving the art and legacy of Oregon films and filmmaking.

Fort George Brewery and Public House. Pub food and seafood are served in this popular brewpub built in a former auto repair shop. The beers are plentiful, varied and delicious. Fort George was briefly the name of Astoria, re-named for King George when England seized temporary control during the war of 1812.

Cannery Pier Hotel. Built on the site of the former Union Fish Cannery 600 feet over the Columbia River, this hotel is the ultimate in comfort and luxury. Views of the great river, the Astoria-Megler Bridge and Cape Disappointment are impressive. A free chauffeur-driven limo service uses classic old cars to shuttle you to and from your evening destination. Expensive, but worth every penny.