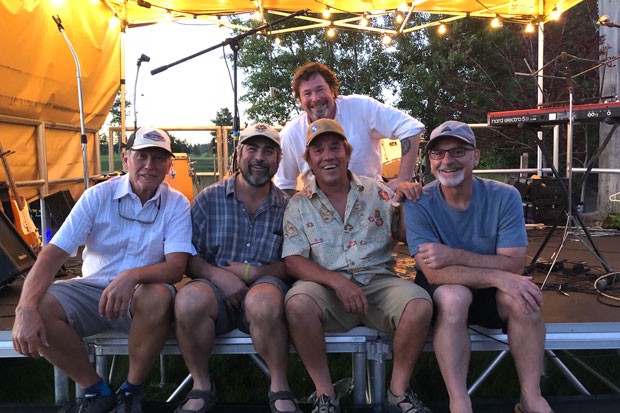 "It takes a huge level of commitment with every step you take with music," Victory Swig bassist Barrett Dash says. "We try to balance our daily schedules, work schedules, recreation schedules—everything people do in Bend— as well as book the gigs and get the most fun shows. It's a lot of work to make it all happen, but worth it."

If you're someone who loves live music and lives in the area, odds are, over the last several years, you've seen a Victory Swig show. The band has a rich history in the Central Oregon music scene, with some members having played locally for 10 or even 20 years.

"We all have a similar vision," Dash says. "We all just have a huge passion for music and we have a wide array of tastes of genres of music. Being one of the most diverse bands in Bend, it's fun for us and fun for the crowd. We keep it fresh and listeners want to get to the next show. Our main concern is getting a good, positive energy exchange. Music is a huge thing in Bend, it's been something for all of us."

With each show, Victory Swig continues to grow and adapt to their own personal tastes, as well as that of their audience. Throughout the years, they continue to push audio boundaries and play new music. Dash says Hinderberger has an arsenal of original music they haven't integrated into the setlist yet. They like to keep the pace moving forward at a constant flow.

"It takes more time than most people think to create or craft a song, and you really want it to be something with some shelf life if your band has been working hard on it," Dash says. "If it's our first full band album, we've got to make it count. When we do produce a single, a demo or a CD, we want it to be packed with great—not just good— tunes. The kind that make you smile, dance and feel good. The rhythms that get you moving, and the lyrics that get you thinking."

The Victory Swig sound involves a variety of influences from genres running the musical gamut. The band loves reggae-influenced bands such as Slightly Stoopid and Pato Banton, and '90s-esque bands including the Red Hot Chili Peppers and Soundgarden. They also have a firm love of jam bands including the Grateful Dead and Phish.

The members of Victory Swig have several band goals in mind, including planning to write, record and release a solid full-length album. The group wants to play more Oregon and Pacific Northwest festivals and multi-bill shows. "Each show has its own energy, based on the crowd," Dash says. "You never know which show you've going to play that has the right set of ears. That's how people get breaks. There are people, who make it in music, but it takes a lot of work. We would probably all quit our day jobs if we could sustain ourselves with music. I see us doing Northwest festivals; we're a good festival band. Bars are fun, but festivals are really where it's at and that's where I think we can tap our crowd."