Proofed or not, Som zings with its cane vinegar cordial

Inspired by Thailand since a backpacking trip in 1987, Chef Andy Ricker returns to Southeast Asia for several months each year to eat, cook and study the food culture. Ricker is well known as a James Beard award-winning Chef in Portland for his Pok Pok restaurants. While developing the Pok Pok bar program Ricker was influenced by the complexity and flavors of the drinking vinegars he savored in Thailand. He formulated his own vinegars and launched Pok Pok Som, a drinking vinegar company in 2012. 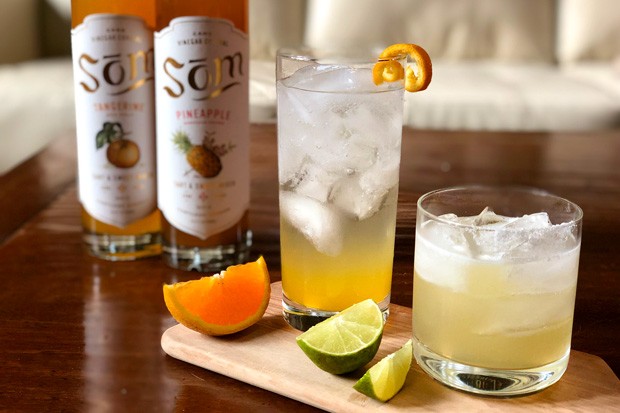 Drinking vinegars, also known as shrubs, switchels or haymaker's punch, may sound new but were a popular thirst quencher for Colonial settlers and have a long global history from Ancient Greece to China. The sourness in a drinking vinegar is what makes it exciting. Like Samin Nosrat taught us in "Salt, Fat, Acid, Heat," the acid contrasts other flavors, like the sweet fruit in a drinking vinegar, and makes them sing.

Earlier this year Pok Pok was dropped from the name and Som launched with revamped flavors and new packaging featuring artwork inspired by vintage botanical illustrations. No longer labeled as drinking vinegar, the term was rebranded to cane vinegar cordial. "We wanted to refresh the brand," said General Manager of Som, Dustin Reuwer, "to make it new, improved and up-to-date. We revisited recipes and revamped flavors to be more complex with less sugar."

Regardless of how you like to drink, proofed or not, Som provides an interesting base. Simply adding soda water to any of the flavors gets you a refreshing, sophisticated non-alcoholic beverage. I'm currently addicted to tangerine sea salt sodas. Som sources their Italian salt from Oregon-based Jacobsen Salt Co. who imports it from one of the world's oldest operating saltworks in Trapani, Italy. Reuwer told me the salt "layers on your tongue and sits around and sticks," but I didn't quite believe him until I tried it.

Ginger, one of the two formulas that didn't change with the rebrand, is a versatile addition to any bar. It can be used to make a bright, spicy and tropical ginger ale, a mule, dark 'n' stormy or any ginger-based cocktail.

Since it's summer, margaritas are perfect sippers and the pineapple Szechuan pepper takes the tequila-based cocktail to spicy new levels. The peppery kick is a quick hit so it doesn't blow out your taste buds. If you want to try Som use the code SOURCE20 for 20% off any order online.