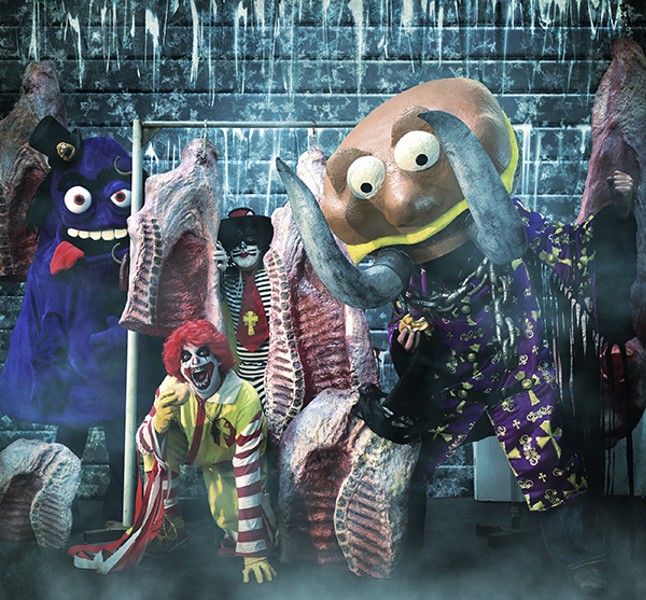 The whole thing sounds like the imaginative daydream of an angsty teenager in the back of a high school health class, but fortunately for us, not only does it exist—it's even more entertaining on stage than in concept. Flanked by Slayer Mac Cheeze on guitar, Grimalice on bass, and the Cat Burglar on drums, Osbourne's band plays what they like to call "drive-thru metal" and refer to themselves as Mac Sabbath. Of course they do.

"Ronald flips burgers while he's performing on stage with a grill that has all these lights and smoke coming out of it," says the band's manager Mike Odd as he attempts to describe the complete sensory overload of a Mac Sabbath show. "There are giant inflatable clowns with skull faces and lasers coming out of their eyes and Ronald is pulling strange things out of his suit the whole time. It's like clown birthday party magic mixed with the most crazy sinister heavy metal stage show you've ever seen."

As I speak with Odd over the phone (he handles all of the band's interview duties due to Osbourne's unwillingness to speak with media), he reveals an elaborate story that includes a late-night first meeting with Osbourne at a fast food restaurant after answering an anonymous phone call. Odd speaks of his interactions with the eccentric Osbourne (who I'm told came up playing secret rock shows in the basements of L.A. restaurants) with such conviction that I begin to accept whatever he says—no matter how outlandish it sounds. Part of me wants to believe every word of the intriguing mythology the band has built for themselves. I want, desperately, to believe in an entertainer like Ronald Osbourne and get lost in his surreal world.

"I'm constantly inundated with stories from him about how he's traveled here in the time-space continuum and that he's from the '70s," Odd tells me. "He talks about all this alien stuff and I'm like, 'Wait a second, are you trying to tell me you're an alien?' and he always explains to me that there's no difference between a time traveler and an alien.'"

As absurd as the band's backstory and onstage antics are, the group manages to rise above the gimmicky nature of their fast food shtick with an impressive display of musicianship. Somehow, dressed in over-the-top clunky costumes, Osbourne and his bandmates faithfully reproduce Black Sabbath classics with their own brand of socially conscious anti-fast food lyrics.

"The imagery that you're seeing and the music that you're hearing is from the time that Ronald talks about coming from [the '70s]," explains Odd. "It was a simpler time, before Monsanto really took over and before GMOs got out of hand—and that's all in the lyrics." He adds, "It's real goofy and everyone's laughing because it's so ridiculous, but if you really listen to the guy, he's kind of serious too."

Despite what you might expect from a Black Sabbath cover band, the show is entirely family friendly (they've even played for elementary schools) and since their start in 2014, they've been turning skeptics into fans wherever they go-even drawing approval from Black Sabbath themselves.

"When we roll in every night, there's usually some confusion and people aren't always comfortable with everything that's going on," says Odd. "Lots of times the venue doesn't really understand what it is, but by the time we're done and leaving, there's a complete 180 of how we're being treated. They get it, they love it, and everybody wants more of it."