Drive-Thru Specimen Collection, Coming to a Hospital Near You

If your doctor thinks you need a test, you can get one from your car from St. Charles starting this week

April 14, 2020
comment
If your medical provider thinks you need a test for COVID-19, you can get it done via drive-thru starting this week in Bend.

St. Charles Health System announced Tuesday that it will begin offering a drive-up specimen collection service starting Thursday. The service isn't just for anyone who wants to drive up, however; the health system said people have to have a provider's order, and make an appointment before showing up. 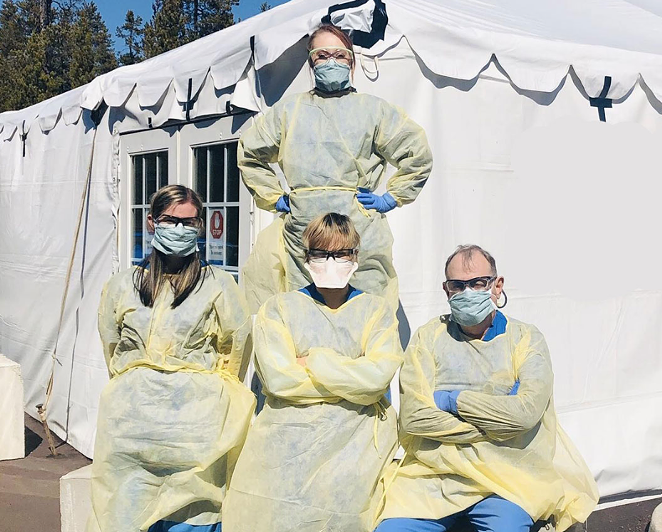 The move is part of St. Charles' ongoing effort to ramp up testing at its facilities, as we reported last week. On April 10, St. Charles received its first allotment of rapid test kits, which it is now using to test patients who are in the hospital. The first shipment included 120 tests, with another 890 on the way within two weeks, according to St. Charles.


“We [now] have the opportunity to test anyone that has worsening symptoms,” said Dr. Jeff Absalon, chief physician executive for SCHS in a press conference Friday (Story: When Will Central Oregon Reach Its Peak? 4/10) “We encourage you to go to your doctor. This will help us identify who has it, how we isolate them, and how we can manage this disease.”


As Tuesday's press release from St. Charles explained, "Once that shipment is received, the health system expects to expand rapid on-site testing to its hospital laboratories in Madras, Prineville and Redmond."

On Friday, St. Charles officials also said the health system will eventually be able to test for COVID-19 antibodies in the asymptomatic population—but that was more of a long-term strategy, and wouldn't be available in the next two weeks.

The drive-thru testing service is available at the St. Charles Family Care Clinic on Neff Road in Bend. People can call 541-699-5107 to schedule a drive-up appointment.

Perhaps another reason for that neighborhood scavenger hunt, rather than that mountain bike shred...