I typically avoid conflict to keep from having ugly conversations. I'm in an unhappy relationship, and it's clearly not fixable. I always rely on the other person to end a relationship, even when it's making me really miserable. Why do I do this, and how do I change? 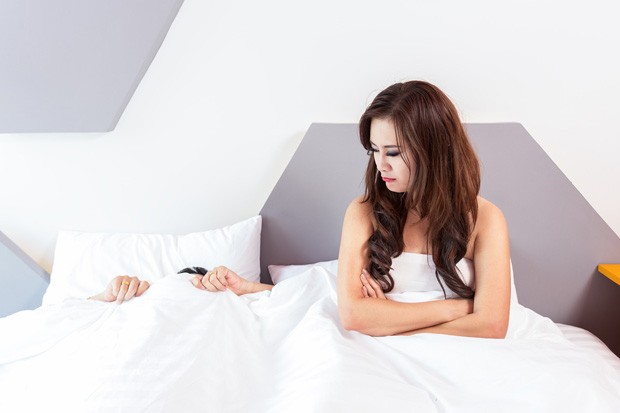 Note that fighter planes have an "ejection seat" and not a "go down in a flaming wreck" seat.

Fighter plane seat design is a helpful model for relationships that have run their course. Facts don't change because you refuse to acknowledge their existence. Your approach — which I'll call "nonfrontational" — is particularly counterproductive. Clinical psychologist Randy Paterson calls this a "passive" style of responding to conflict, driven by a goal of avoiding conflict "at all costs." In fact, what you end up avoiding is not conflict but temporary emotional turbulence — the queasyfraidyanxiousness — that would come with taking steps to resolve it. So, by avoiding conflict, you end up having much more conflict for a much longer stretch of time!

But say you braved up this afternoon and told your boyfriend it's over. It would feel miserable in the moment, and that misery would have plenty of company as you did all those fun breakup things like sawing the couch in half. But then you'd be out — instead of neck-deep in still miserable for another three months, or as long as it takes for your boyfriend to notice he's had enough.

Healthy assertiveness starts with telling yourself that you have a right to try to get your needs met. Feeling worthy might take some emotional renovation. If so, do get on that, either on your own or with a therapist. However, there's a secret to asserting yourself, even as a person who's long avoided it. You don't have to feel worthy or even comfortable in order to do it. Admit that it'll feel scary, totally foreign, and generally like a big pile of suck to assert yourself — and then do it anyway.

You might also apply this to other areas of your life, from friendships to work. When a situation you're in becomes irreparably toxic and awful, there's a reasonable thing to do, and it isn't staying in it and having the cat join you once a week in a small private funeral for your enthusiasm.

I'm a woman in my early 30s. I grew up on a steady diet of romance novels, and I keep longing for the true "soul mate" love from my fictional world. No guy ever seems right, so I never feel that yearning, intense desire, and connectivity I've been searching for. I feel more of those emotions reading romance novels than I ever did with any boyfriend. Do you believe each person has a "true love"? Am I too much of a romantic?

So, going by the romance novel standard, you're just looking for that handsome, rapey, billionaire sociopath who follows you around like a puppy.

Unfortunately, a belief in "soul mates" is about as realistic. Each of us supposedly has our one and only perfect romantic match. Naturally, this person is conveniently located and culturally in lockstep and is never, say, a nomadic desert goatherd who thinks his life will finally be perfect if only he turns you into wife number eight.

A person who believes in soul mates has a "destiny theory" of love, explains social psychologist C. Raymond Knee. They think two people are either fated to be together or they're not; whether a relationship is good or bad is beyond their control. They can be quick to give the boot to "less-than-perfect candidates" and to see any conflict as a sign a relationship should be abandoned as "just another distraction in the search for perfection." (I think he left out the word "endless.")

Back here in reality, all humans are fallible, and being two different people (who are not dead) often means wanting conflicting things. People who understand this have a "growth" or "work-it-out" theory of love. They believe a happy, satisfying relationship doesn't just happen. It takes work. It's something two people create through what Knee describes as a paired process of "conquering obstacles and growing closer."

Probably the best anyone can do in seeking a partner is figure out their personal must-haves (physically, emotionally, ethically, and any other essential "ly"s) and then find somebody with enough of them to make it worth working to build something together. Realistically, maybe your soulmate is that Mr. Wonderful who finds you beautiful while you're drooling into your pillow — who you can sometimes hear from the next room chewing like something that eats hay out of a bucket. (All you need is not love but a pillow to smother him with and the wisdom to instead use it to stifle your screams.)