Fencing club mentors youth in the art of civil combat

Swords clash. Catlike feet squeak as they pounce back and forth, waiting for an opportunity to move in for the attack. After a quick surge forward and a dynamic lunge, the high-pitched beep from the scorekeeping system declares the victor. It's the unbiased judge and jury of civil combat for the young fencers who come to test their mettle at High Desert Fencing Club.

When it comes to kids and teens, fencing is not the first sport that comes to mind. Yet, in this unassuming building across from a car dealership on South Highway 97, they come. Every week. Religiously. They're hooked on a historical form of combat whose origins date back to Ancient Egypt and evolved to become a passionate pursuit for hundreds of thousands worldwide. An elite number of those even compete at the highest level –the Olympics. 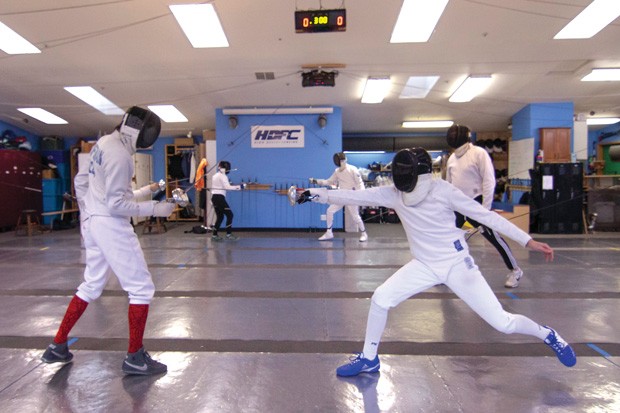 "Fencing is an intellectual battle with your opponent," Jeff Ellington, vice-president of the club, yells over the tinny din of swords striking. "To win hinges on the idea of a physical contest, but it's respectful and generally gentle, yet still with the element of combat. It's your will against theirs–in your technique and your strategy. There's something intriguing and playful about that."

Max Munro, a student at REALMS High School, suits up into his all-white, head-to-toe fencing outfit. Besides a Darth Vader-like overhead mask and grippy shoes, it's comprised of knickers and a long sleeve top with a protective "plastron" underneath to buffer a sword's "hit." In the era of COVID-19, it also doesn't hurt that the fencing's uniform full coverage lends itself well to social distancing. This fact allowed many of the youth fencers to return to the studio sooner than other sports.

"Fencing is just a cool sport because it's competitive without being toxically competitive," Munro reflects. "Everyone is more supportive, more so than you would find in team sports. And who can deny the inevitable allure of stabbing someone?"

Part of the club for 22 years, Ellington and co-board member Randall Barna are dedicated fixtures as mentors and co-managers of the non-profit. They are carrying on a legacy that began with a small group of parents and coach Rich Wayland, who was once a nationally-ranked fencer at the Air Force Academy. Year-round, four nights a week after their day jobs, you'll find Barna and Ellington suited up, sharing their knowledge while, offering constant words of encouragement. 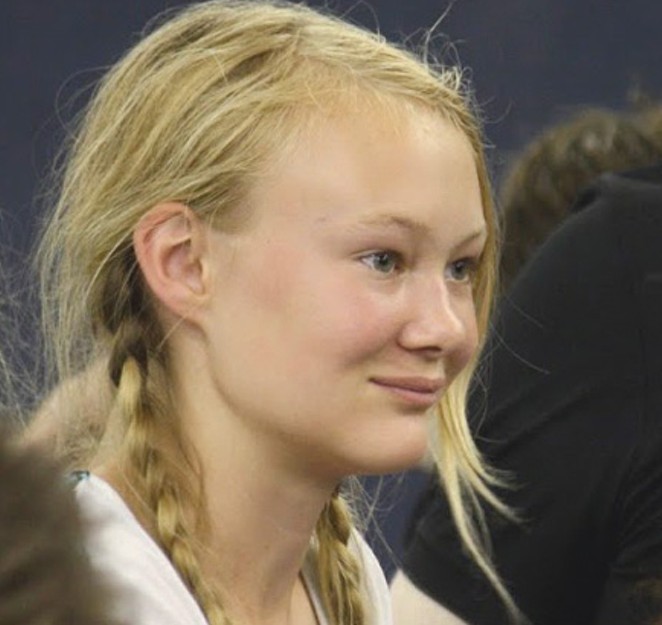 Ellington feels that fencing draws a certain type of youth who has personality qualities "almost antithetical to high school sports." The ones who stay with fencing, he said, are very self-reliant, capable of setting their own goals and always seem to have a confident vision of where they're going.

"They're not your typical team sport athletes. They're willing to come into a time-honored sport where there are a lot of rules and structure." Ellington adds, "Plus, there's a trait of analytical thinking and a unique commitment that comes with fencing. When you face your opponent, only one gets to leave victorious."

Ellington added that fencing and successful academics seem to go hand in hand and can make the difference when seeking admission to prestigious schools. He felt schools may recognize the student likely has intellectual and personality qualities that go along with fencing.

Jackson Crocker, a Summit High freshman, has been with the club less than a year, and said he discovered his love of fencing unexpectedly.

"I was getting bored at summer camp and they had a foil class. So, I took that and thought, 'Wow! This is fun.' It appealed to me at first because I got to fight people with swords, and then soon, I found it was really rewarding to figure out how to maneuver the blade better. I liked how it was a lot like mental chess."

The sport, he said, requires high levels of critical thinking and hand-eye coordination, along with a degree of fitness, yet these skills are not mutually exclusive. To him, fencing is accessible to many because it allows for a broad range of combat styles that capitalize on an individual's strongest skill set. 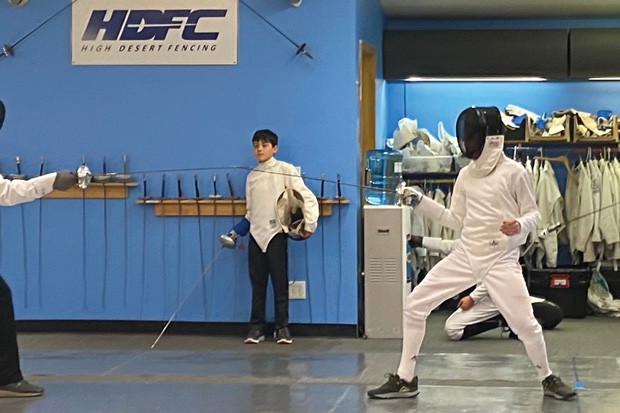 "For example, if your hand-eye coordination is good, you need to be strong enough to move your blade around, but you don't have to be an amazing athlete to do well either."

Because of its niche nature, fencing seems like it might be viewed as an "uncool" sport by peers, or a sport that appeals to non-conformists. Not so, said Crocker.

"It's not mainstream, but that's not why I do it. I actually think any negative stereotypes [about the sport] come from what fencers think other people think about them! The comments I get about fencing aren't really what you'd think, like, 'It's a bunch of nerds.' When you are ACTUALLY stabbing people, they're like 'Oh, that's cool!'"

"And they're being nice because they know you know how to use a sword." Ellington joked with a smile.