E-Bikes on Trails: Expect Confusion Ahead

The last time you hiked or biked on a trail you didn't know so well, did you take note of the land management agency in charge of it? If you're like a lot of people, you probably didn't. Even if that trail required a day permit or some type of parking pass, you may have simply paid and moved on. But a recent change for lands managed by the U.S. Department of the Interior means, for some types of cyclists, you're going to need to start paying closer attention. 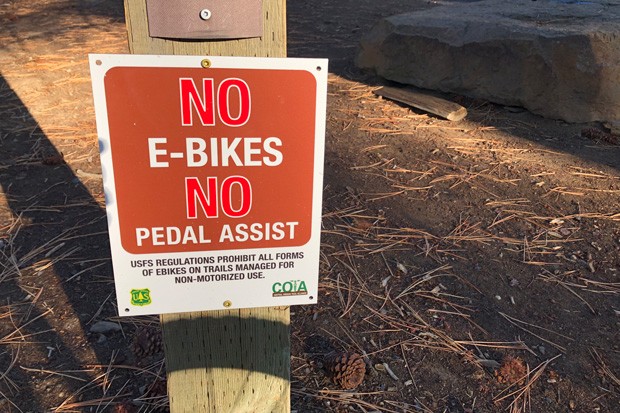 On Aug. 29, Secretary of the Interior David Bernhardt issued a rule change that allows Class I, II and III e-bikes on trails within Interior lands—which includes the Bureau of Land Management, the National Park Service, the Fish and Wildlife Service and the Bureau of Reclamation.

The rule change does not apply to lands managed by the U.S. Department of Agriculture—which includes the U.S. Forest Service. As before, e-bike riders can still ride on forest roads and other places where motorized vehicles are allowed on Forest Service lands.

Take a quick inventory of the single-track trails you've ridden recently in Central Oregon. Were they BLM- or Forest Service-managed? If you're not sure, you've just identified the area of concern here: With two different federal agencies offering two different sets of rules around e-bikes on dedicated trails, there's going to be plenty of confusion ahead.

If conflicts and tempers were already high between e-bikers and other riders, expect those to increase. The topic of e-bikes is a contentious one, even among some dedicated trail enthusiasts in the community. As Brennan Morrow, president of the Madras chapter of Central Oregon Trail Alliance explained, COTA's members are fairly divided among the pro and anti-e-bike camps. Even Morrow, who's been instrumental in building Madras' East Trails Project—built with longer sight lines and other features to allow for e-bikes—told the Source Weekly he can see the pros and cons. (To be clear though, COTA Chair Bruce Schroeder underlined that COTA's approach as an organization is to follow what land managers dictate.)

Allowing e-bikes on trails opens up recreational opportunities for disabled or elderly riders, or those who may not otherwise be able to access certain sites. It also opens up potential for more crashes, when riders who have historically climbed at low speed up steep inclines are now able to go faster. It means more people on the trails—which is both a pro and a con, depending on how territorial you are about other people using public lands at the same time as you are. There's also debate about whether higher-speed bikes do more damage to trails. And there's the question of how much industry influence factored into the decision—nonetheless an interesting one coming from Bernhardt, a former oil industry lobbyist.

At the Prineville District Office of the BLM, they're taking a wait-and-see approach, waiting for further direction from higher-ups before they embark upon any education campaigns or take other action based on the rule change. COTA already puts "no e-bike" stickers and signs on trails where they're not allowed, and its members have already notified the Trailforks app about which trails are now e-bike approved in Central Oregon, Morrow said. As is always the case, responsible recreationalists will now likely pay closer attention to where they can go and what they can do—in the same way they've already educated themselves in how to yield to other riders, hikers or equestrians, what to do when trails are muddy and what emergency preparation steps they should be taking before their ride.

For those not yet in the know or those less concerned, it's going to require more education on the part of the community. It's up to agencies including the BLM and the Forest Service to educate the public, and to partner with others to share the message about what's allowed. By a quick count, BLM trails represent less than 10% of the trails maintained by COTA in Central Oregon—with the lion's share being on Forest Service land. Whether you're a bike purist who's lamented developments such as disc brakes and 29-inch wheels, or you're the early adopter who embraces change, this is a moment to help dispel confusion and ensure a safe ride for everyone.