June 12, 2019
comment
My internet research on Glass Buttes turned up a thread that made mention of something curious: Some people who collect rocks don't like to be called "rockhounds." Is it because it conjures a dog-like image? Does it just sound too desperate? The thread didn't say—leaving us thread-readers on red. 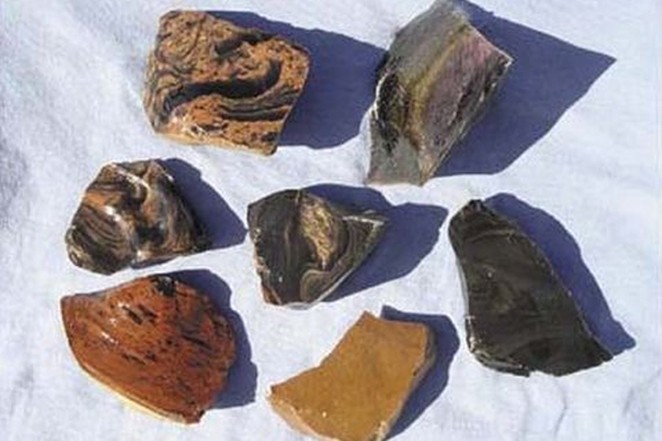 If rockhounding is something you already do on the regular, you may not need the basic tips for collecting obsidian, offered below. That's something of the beauty of this off-the-beaten path adventure: It's a step above the typical picnic or short hike and involves prizes you can take home. Still, it's a simple, not-much-fuss excursion, made more comfortable with the addition of a few items, including leather gloves, a crow bar, a trowel, hand broom and any other digging tools you might have on hand. Sturdy shoes that won't easily be poked through, water and sunscreen are also key. On that note—this isn't the best excursion for dogs, due to the pokiness of the obsidian. Head east on Highway 20 until just before mile post 77, where you'll turn right and head south for about 3.5 miles. It's rockhound code not to tell you where to go from there.

In any case, the rocks that volcanoes made are everywhere. You'll see them shimmering about as you enter the Glass Buttes area, but you can also dig for them. According to the U.S. Forest Service, in "the low lands about 3 miles east of Glass Butte and on Little Glass Butte 4 miles to the southeast, several eruptions produced the obsidian flows that rockhounds collect from today." Note that part about the lowlands?

Types of obsidian found at Glass Butte and Little Glass Butte, according to U.S.F.S., include black, fire, double flow, gold sheen, mahogany, midnight lace, pumpkin, rainbow, silver sheen—some with dazzling marbles or layers; others more mono-color. If you're into this for a day-long trip, bring along enough water to clean off your quarry, so you can figure out how many of each of those you collected. The Bureau of Land Management is the land manager for Glass Buttes. As a general rule, the BLM allows each person to collect up to 25 pounds per day, plus one piece, with a maximum of 250 pounds per year.

Did we mention sunscreen?