Eat, Drink and Be Scary

It's that magical time of year again; time for pumpkin-flavored everything, snuggling up by the fire and drunkenly stumbling through the streets of Bend, dressed like a taco. One of the most important decisions Central Oregonians must make during the month of October is which Halloween party to attend. There's certainly no shortage of options. 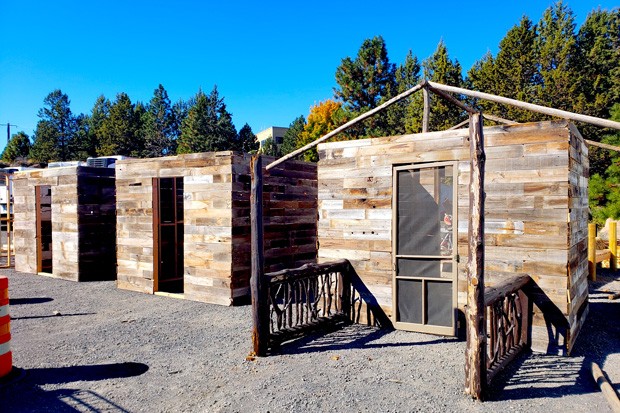 Perhaps one of the most unique and involved Halloween-themed events is the annual Deschutes Warehouse Party. The warehouse itself is converted into a whole new world; this year, into a '70s-style summer camp, complete with cabins, a lake, a dock and its own resident psycho serial killer. Think "Wet Hot American Summer" meets "Sleepaway Camp."

But we wanted to know, just what goes into setting up such an elaborate party?

The Deschutes party has made quite a name for itself over the past 10 years, and many locals consider the brewery's annual bash to be one of the best in Bend. A new theme is chosen every year, and sometime in late September the crew gets to work, building elaborate props and structures. The amount of work that goes into preparation is mind-blowing, considering the party only lasts for two nights.

"I started salvaging materials in the summer," event coordinator Heather Laurie explained. "I spend about an hour a day scoping Facebook and Craigslist." Most of the props were free, salvaged by Laurie and her partner. Others were recycled from last year's event. "I don't just want to buy a bunch of plastic decorations online," says Laurie. "We do a lot of recycling—we like to build pieces that can be used again." For example, she explained how the 'cabins' the contractors were busy erecting could be recycled into backyard sheds.

The three life-sized cabins were scheduled to be transferred into the warehouse on Oct. 23, as will the massive bench, resembling a dock, that will round off the indoor "lake." The prop pieces are also interactive; the cabins packed with clues helping guests solve a campy murder mystery.

Of course, because of the nationwide demand for Deschutes beer, production can't simply shut down. "The production team is super awesome about working around us," Laurie shared. "We work around each other. It's pretty cool."

In addition to an extensive and impressive DJ lineup, there are four bars, a large lounge area, a dance floor and a live graffiti artist, Shakir Manners (Shak Smart), who also created an inspired mural for the event. Bars will feature an undisclosed cocktail list, wine and Deschutes beer.

Hot tip: Those who purchase VIP tickets to both Friday and Saturday will have access to an exclusive daytime work-out session, geared toward rejuvenating the body and preparing it for another night of non-stop dancing.

Boneyard Beer is throwing its first ever Halloween party on Friday, Nov. 1. For those not quite ready to retire the costume, or if the work-week prevented someone's freak flag from flying too high, they can head on over to the decked-out pub for another night of fun. Boneyard will host a costume contest (complete with prizes), feature a local DJ and offer food and drink specials.

Because this is Boneyard's first-ever attempt at a big-time bash, they're pulling out all the stops. "Our chefs are preparing special, Halloween-themed appetizers," said organizer Nicole Vega. "The bartenders are creating special cocktails, and our [adult] slushies will be Halloween-themed, too."

Redmond's DJ Chuck Boogie will play music suitable for all ages (the whole family is encouraged to attend), ranging from Halloween classics and oldies to modern hits. The cash prizes for the costume contest are pretty hefty, with the first-place winner walking away with $500.

Worthy Brewing's Dance of The Dead

Seeing as how Worthy's pub is open for business even on the day of the big Dance of the Dead, Kayja Buhmann, event coordinator for Worthy's annual Halloween party, explained that their setup and break-down process has to happen extremely quickly. It isn't too difficult, considering decorations are minimal, she says.

"We bring in lights and smoke machines," Buhmann explained. "But really, the space is so cool that it decorates itself. The costumes themselves are the best decorations." Perhaps one of the coolest features this year will be a live performance by LUNIZ—the American hip-hop duo that has had "5 on it" since 1995.

"Our VIP package is pretty awesome," said Buhhman. "But we limit the number of tickets we sell. Our goal is to keep things simple and affordable."

And for those just looking to get scared without the massive party, the Scare Grounds is back at the Deschutes County Fairgrounds, featuring three haunted attractions.

Whether you're looking for simplicity or extravagance, late night dancing or family-friendly fun, trick or treat yo' self to Bend's Halloween scene. There truly is something for everybody.