Two recipes inspired by the traditions of non-Christian Americans

The Jewish American tradition of eating Chinese food at Christmas is rooted in pragmatism and loneliness. In the mid-1900s, America's two largest non-Christian immigrant populations shared the experience of watching the world grind to a standstill each December. Their friends and neighbors vanished into their extended families, leaving behind empty cities where everything was closed—except Chinese restaurants. 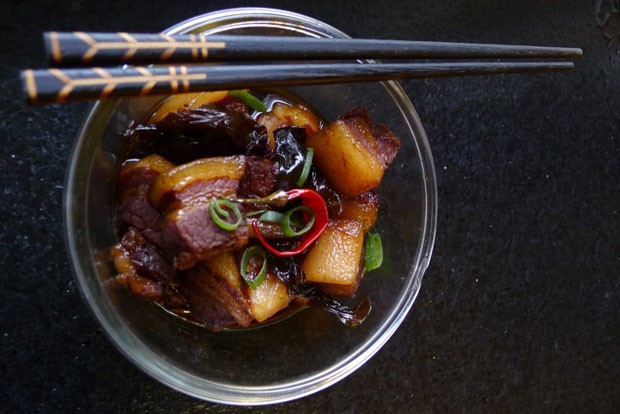 On a windy Christmas night in Albuquerque, I took a walk in the footsteps of my East Coast immigrant Jewish forefathers and took my two little boys out for Chinese food. My wife isn't of the tribe, but works on Christmas like a good Jewish American, making it easier for observant coworkers to take the day off. Like the Chinese-food-eating trailblazers who started the tradition, we had nowhere to go, and not much else to do.

I was the restaurant critic of record for the local paper, and had been in every Chinese restaurant of note. I knew exactly where I wanted to go for Chinese Christmas: Budai, a strip mall gem by Interstate 25, set between a dollar store and an accountant's office.

Budai is run by a Taiwanese-born couple who opened the restaurant because Hsia, the husband, was turned down for a job at Panda Express. In the dining room, wife Elsa cheerfully calls him "Panda Express Reject."

Elsa helped us craft a meal in the spirit of our trailblazing Chinese-food-eating Jews, many of whom took advantage of the pleasures of those non-Kosher kitchens.

We ate mapo tofu, aka "grandma's bean curd," in honor of those Chinese-food-eating Jews who sought out pork on the sly. It doesn't look like it has pork; just a plate of tofu with this really tasty, chunky sauce. We smacked down an order of dong po pork, pork belly chunks braised in a dark thin sauce, to commemorate those times when an errant forefather might have had the opportunity to dine alone and eat glorious pork in full view.

I reached out to Elsa recently in search of guidance for another Chinese Jewish-American Christmas.

Specifically, I wanted to know about greens cooked qing chao-style, which means "clear stir-fry." It's a simple, subtle recipe that doesn't even have soy sauce, focusing the eater's attention squarely on the vegetable itself.

But despite being simple, Elsa cautioned, it's not necessarily recommended for civilians to try at home. "It needs a very high-temperature stove and a high-powered exhaust," she said. 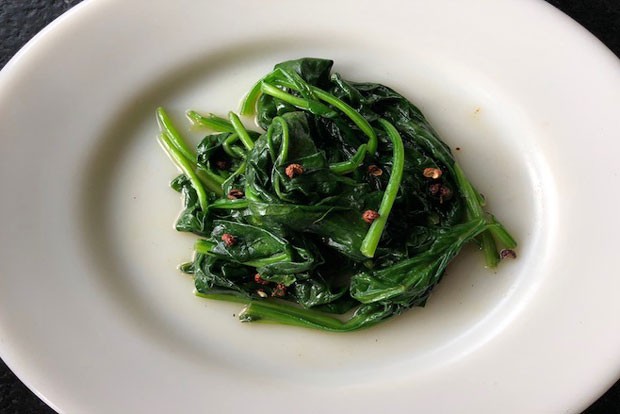 I'd heard her warnings before. And sure, she was right about the gooey oyster-and-bean-sprout omelet thing on the secret menu.

Still, I was glad to have at least tried that omelet and tested my limits, and I was ready to try qing chao stir fry. Following Elsa's instructions, I did just that and inhaled my work. I made another batch quickly and easily. Gone.

I then went on a bit of a qing chao rampage, making it with any greens I could get my hands on, including spinach, bok choy and even peeled celery. It was fantastic every time I made it, with every green I tried, different types of broth, and every variation Elsa suggested.

The most interesting flavor comes from Sichuan peppercorns (no relation to black pepper). Known as huajiao in Mandarin, these pink seeds have an otherworldly tingly and piney taste that's as much a feeling in your mouth as a flavor. Tossed in a mound of spinach, the Sichuan peppercorns give the arrangement a taste that's hard to pin down and a look of mistletoe.

I leave spinach leaves whole, even big ones. Other greens (like bok choy) should be chopped or they will be too tough to chew through.

Heat the oil on high in a wok or heavy pan. Add the Sichuan peppercorns and stir-fry for 30 seconds. Add the spinach, broth and wine, in that order. Stir it around quickly, cooking everything evenly. Add the white pepper. Stir fry 1 minute at high heat, so the sauce starts to thicken but doesn't completely evaporate. Season with salt and serve.

Translates loosely to "What the Rabbi eats when traveling." Don't panic at the quantity of soy sauce and sugar. Most of it stays in the braising liquid.
4 servings

Boil a large pot of salted water. Add the pork and simmer for 5 minutes. Remove and drain. Add the scallions, ginger, five spice, chili peppers (if using) and sugar to a clay pot or any pan that has a tight, heavy lid. Add the chunks of pork, skin sides down. Pour in the soy sauce and wine, and enough water to just cover the pork. Cook for two hours on low with the lid on, turning the pieces after an hour. Thicken some gravy if you wish with cornstarch or simmering. Serve hot, drenched in the sauce.