There's a new food cart in town, but you'll probably recognize the faces behind the Austin-style barbecue project. The folks at El Sancho have recently opened Runaround Sue Barbecue, which made its debut in early October at the Boss Rambler Beer Club. The food cart features slow-cooked smoked meats such as pulled pork, brisket, turkey breast and beef sausage, along with true Texas-inspired sides including mac 'n' cheese, barbecue beans, potato salad and coleslaw. 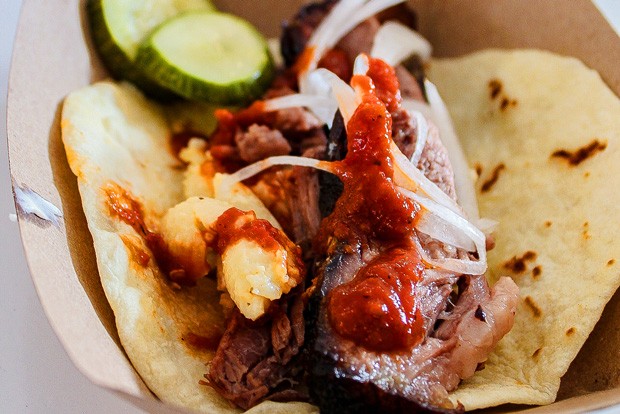 "We have a lot of barbecue fanatics working at El Sancho, and it's something we've been dreaming up for a while," said El Sancho founder Joel Cordes. The cart replaces Scoutpost, which previously resided at the Boss Rambler location. The barbecue cart will serve offerings such as smoked meat plates, sandwiches and tacos. However, these aren't your ordinary El Sancho-style tacos. Served on warm flour tortillas, with your choice of meats, these tacos include your choice of any side offerings—which means options such as brisket and mac 'n' cheese or pulled pork and coleslaw tacos. The cart will serve barbecue Tuesday through Sunday from 11am until sold out (or 7 pm).