Come next fall, a brand-new elementary school on the north end of town will be opening its doors in Bend. Pine Ridge Elementary School's current principal, Kevin Gehrig, who has been leading the planning process, has been named principal of the new school. 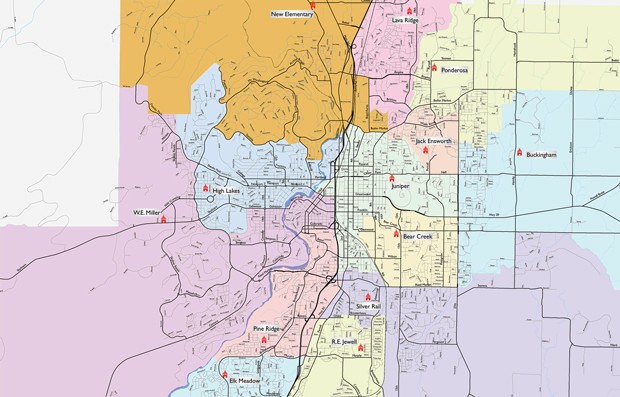 Exciting as that is, especially with Bend's ever-increasing population, the opening will cause hundreds of children to have to change schools next year.

The new elementary school, which was funded by the construction bond that voters approved in 2017, is located near O.B. Riley and Cooley Roads and will hold around 600 students.

All families with students affected by the new addition (in Kindergarten through fourth grade) should have received a letter from the Bend-La Pine School District in early February.

"To populate that school, we have to move students there," said Lora Nordquist, assistant superintendent at the Bend-La Pine School District. "And then we also needed to relieve overcrowding at a number of our elementary schools. So, the process ended up impacting almost every neighborhood elementary school in Bend, because you can't just shift students from the neighboring schools to the new schools, because then they'll have really low enrollments, and all the other schools...they're close to being overcrowded."

The students being moved will be going into Kindergarten through fourth grade, with around 800 students impacted by the boundary change. Although some of those students have yet to enter school, Nordquist believes the new addition will affect around 11 to 12 percent of total students.

"Essentially we had a shift northward in general from both sides. So, we have a number of Miller students, for example, who ended up going to High Lakes. A number of High Lakes students ended up going to the new school. And then on the other side, Lava Ridge, Ponderosa, and Buckingham come toward the new school: Ponderosa to Lava Ridge. Buckingham to Ponderosa...and then shifting students north all the way from Jewell on up."

Current fourth graders who are affected by the change will be able to request a "grandfathered" exemption to stay in their current school — however, if they choose that option, their transportation to the school will be the responsibility of the family.

Bend-La Pine Schools will be going through this process again in the next few years, with plans to open a new high school in the fall of 2021. Starting in the fall of 2019, the school district will begin looking at existing middle school and high school boundaries and how those will need to change. Their goal is to notify families and students of any boundary changes by the spring of 2020.

"People will know a year and a half before the boundaries actually change at the secondary level, because it could impact where a student might want to start high school, for example. If you had a ninth grader in the fall of 2020, and the student knew he was going to be moved to a different high school boundary, he might choose to go ahead and start at a different high school if it wasn't the new school."

"We wanted to give families a lot of notice about that," she said. "Moving high school boundaries is hard, because the older you get, the more attached you are to a particular school. So, it's a difficult process."

Bend-La Pine Schools collected data through forums and surveys, and Nordquist said "not one person wanted his or her child to move to a new school."

"Whether it was the brand-new school, or anywhere else, everyone said, 'Please keep us where we are. We love our school.' So that's great, but it doesn't work to relieve the overcrowding. So, I would say in general, people who got moved were not thrilled by the idea."

The new high school has yet to be named, but will be located in south-central Bend, off Knott Road and 15th Street.

The school district will be selecting the planning principal for the new high school this summer, with plans for them to come on board in July 2020. They will bring a committee together to start plans for the school, including the naming process.