On June 23 the Bend Police Department, in coordination with social services agencies, closed and cleared Emerson Avenue, where 40 to 50 unhoused people were living on City right of ways, using a City policy uniquely tailored for Emerson that could guide how unhoused encampments are swept in the future. At the Bend City Council meeting approving the policy on June 2, Councilor Anthony Broadman called it a “dress rehearsal” for problems in the community, as the number of unhoused people continues to increase yearly.


At the City’s first council meeting since Emerson was cleared, service providers gave an after-action report to the Council, noting what City officials think went well and what could be improved. City leaders believes they’re on the right track in regard to cooperation with service providers who were able to communicate set timelines for the closure, make provisions and referrals for campers, assist in sorting, packing and relocating belongings in the camp and set up a station at the nearby Shepherd’s House shelter for any additional help.


“I think one of the things we really learned was the importance of clear consistent messaging, and that we were committed to a date so there wasn’t a lot of shifting of dates so that we could bring that information to folks that were living on Emerson,” said Stacey Witte, executive director of REACH, during the after-action report-out. “That was so vitally important especially because we couldn’t offer them another place to actually move their homes.” 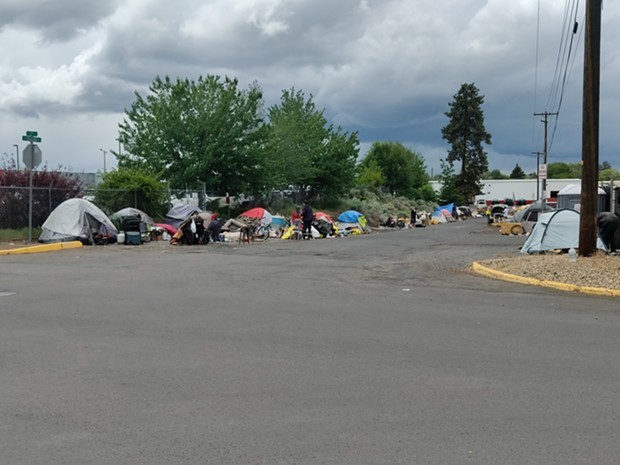 In its written report the City claimed that police officers on-site were calm and professional in their conduct, which Witte echoed in her comments. Others were critical of the police’s actions that day, namely Deschutes County District Attorney John Hummel, who declined to prosecute any of the five people Bend PD sought charges against during the closure. Hummel wrote a letter to Bend Police Chief Mike Krantz criticizing the police’s use of force in detaining camp resident Darren Hiatt for attempting to use a port-a-pottie.


Hummel also criticized the police for what he saw as deliberate targeting of the Central Oregon Peacekeepers, an activist organization that provided aid for those living on Emerson and who have frequently criticized Bend PD.

Related Can't Camp Here: Bend City Council adopts a policy for the removal of houseless camps on public right of ways. With shelters at capacity, where will they go?

Can't Camp Here
Bend City Council adopts a policy for the removal of houseless camps on public right of ways. With shelters at capacity, where will they go?
By Jack Harvel
Local News
“In previous conversations with you, I’ve shared my impression that your department evinces disdain towards people associated with the Peacekeepers,” Hummel wrote. “After reviewing the 62-page report of the Emerson road incident, I now consider your department to be obsessed with them.”


Krantz disagreed with Hummel’s assessment of the situation and defended officers’ actions in an email to OPB.


“Ideally we won’t have any closures until we have more choices for where people can go because that’s really the number one issue,” said Donna Burklo, program director at Bend Family Kitchen, at the Council meeting. “Many did use the shelter, that has been noted that the shelter numbers have gone up but not everybody is going to want to take that option.”


Service providers said since the closure of Emerson, many of the street’s residents had moved to other areas.

Two Dead at Hunnell Campsite
Two people died, presumably from the extreme heat, in the area popular for houseless campers Sunday
By Jack Harvel
Local News
“I think that most of our numbers are more anecdotal, I know that we had a fair amount of people go over to Hunnel Road,” Witte said. “They have dispersed among the city, over towards railroad, canal areas and DOT [Department of Transportation] land, I do have a handful of folks that left Emerson and went down towards DRW [Deschutes River Woods] area, so they have dispersed and many have moved two, three and four times since the closure of Emerson because every time they get settled somewhere they can’t stay there.”


An Emerson evictee, Joseph Davis, was one of two deaths that occurred on Hunnel Road on June 27 along with Alonzo “Lonnie” Boardman during an unprecedented heat wave. Their deaths were suspected to be caused by the extreme heat, but the Oregon state medical examiner later reported they died of non-heat-related causes.


The administrative order that allowed the camp’s removal was targeted specifically to Emerson, and any future removals on City rights of way will have to be discussed and approved by the Council. The order also only applies to the City, and doesn’t affect other entities that can carry out camp closures.


“I think there’s a lot of confusion in the community, this is on City right of way, that policy only applies to right of way there are many private property owners or other public agencies that adhere to other policies,” Bend City Manager Eric King said. “I just don’t want the impression that camp removals will never occur in Bend because we don’t control all that property.”

Editor's Note: An earlier version of this story incorrectly stated that five people were arrested on Emerson during its closure. Only one person was arrested at the scene. Bend PD sought charges against five people, all of which were declined by the District Attorney. We regret the error.

Related Beating The Heat: Cooling centers in Bend, Redmond and Madras provide a place for unhoused people to escape the blistering heat

Beating The Heat
Cooling centers in Bend, Redmond and Madras provide a place for unhoused people to escape the blistering heat
By Jack Harvel
Local News