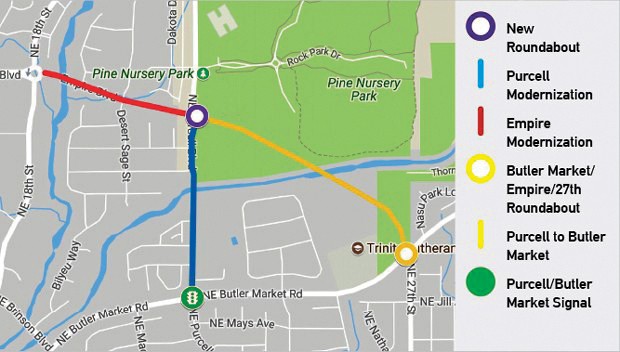 Parts of Empire Avenue will be closed for construction projects starting Sept. 11, and will be set to reopen in December. According to the City of Bend, the street will close from the 18th Street roundabout east to Purcell Boulevard. Empire will still have access to the Parkway during construction. The project is part of an overall plan to increase safety and traffic flow from 27th Street to Empire Blvd.

The closure affects all cars, bikes and pedestrians, according to the City of Bend. The Pilot Butte Canal trail will also close at Empire in both directions.

The road closure will also affect people who use Pine Nursery Park and students, staff and parents of Ponderosa Elementary School. People can access the park and school from Yeoman Road, heading south on Purcell to the park entrance.

Phase one of the work includes reconstruction of Empire from 18th Street to Purcell and a new roundabout at Empire and Purcell, closing access to 18th Street off Empire. This phase is expected to take nine months. People can still access businesses including 10 Barrel East from the south via Butler Market Road, Brinson Boulevard and 18th St.

The estimated cost for phase one is $4.5 million. Funding comes from the City of Bend transportation system development charges and utility franchise funds.

Future design and construction of additional improvements, including Purcell between Empire and Butler Market Road, the Empire extension from Purcell to the intersection of 27th Street and Butler Market—including a new roundabout—are planned for a later phase of the project and are subject to City Council approval, the city said in a release.