As we enter the Riverhouse on the Deschutes and step down into the basement, it's eerily empty. All that exists right now, besides hundreds of thousands of dollars' worth of equipment, is hope.

According to locals Courtney Latham, owner of Flip Flop Sounds, and Kimi Chassie of Curated Event Rentals, their new reality is shifting along with their event business model—trying to find safe and creative ways to bring music and experience to the community. One of their creative adaptations: Setting up a new stage, just for live-streaming events. 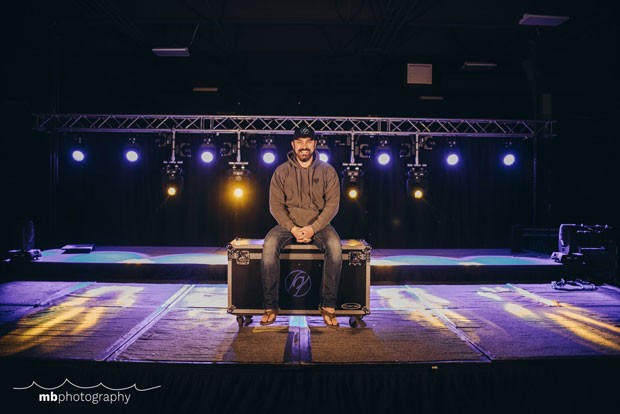 Of doing events in regular times, Latham said, "You have to have a love for it. It's tireless and oftentimes thankless. But when you can look out at a crowd or group, and see the joy...the memories, the connections, the 'happy'...it's truly what motivates me." It's comforting to know that one is not alone on a sinking ship in the middle of the ocean, Latham relates.

The two event professionals say they were on track to having their biggest year yet.

"Morale has been spotty," Chassie chimes in, "but I feel that our event industry community has really come together with support for one another.

"I'm extremely touched by most of my clients, with their concern for myself and my business as they deal with the sadness of having to reschedule their own events."

“We are the self-employed who pay ourselves last, and clearly there’s a need to reevaluate our unemployment system and infrastructures to assist the livelihoods of so many in the event industry.”—Kimi Chassie tweet this

Live productions are a large part of what ties a community together. "The current pandemic has been especially devastating to the meeting, event and hospitality industry," U.S. Travel Association President and CEO Roger Dow said. Face-to-face meetings are significant to the global economy. The 2017 report, "Global Economic Significance of Business Events," showed that face-to-face meetings resulted in $1.03 trillion in direct spending to the economy. "Loss of revenue to our industry directly is well over $400 billion," according to sources from the Live Events Coalition. That's about $900 billion in Gross Domestic Product in the U.S., with a trickle effect to many other industries and businesses.

"We are the first to close and the last to open," Chassie said. "We are the self-employed who pay ourselves last, and clearly there's a need to reevaluate our unemployment system and infrastructures to assist the livelihoods of so many in the event industry." Live Events Industry of Oregon, a coalition of events-industry professionals, is also helping vendors unify together, including scheduling networking with other small business owners also struggling to make sense of it all. LEIO estimates that about 2,000 events companies operate in Oregon, according to a story in The Oregonian.

Adapting to the times, the team at Flip Flop Sounds has set up a professional stage for streaming content—allowing bands and other performance groups to use the space to play for tips from supporters who can watch them perform while under the reduced gathering guidelines. "We really don't know what to expect, and information seems to change on a daily basis. There's so much uncertainty with business and economy, but never anything like this. I really miss the thump you can FEEL in your chest from the kick drum," Latham confessed. He says that the biggest challenge has been looking into the face of the unknown. "I can't sit idle. If I stop trying, I'll get depressed."

At this point, large gatherings will continue to be banned in Oregon at least until September, per Gov. Brown's executive orders. Last week, Sen. Ron Wyden, Sen. Jeff Merkley and dozens of others sent a letter to Majority Leader Mitch McConnell and Minority Leader Chuck Schumer, asking them to prioritize legislation supporting the live events industry throughout the shutdown.

With such a long time off duty, the live event industry will need more assistance for the companies that make their primary revenue from mass gatherings. "I'm NOT a fan of politics," Latham admits...but to politicians, he says, "HEY! WE'RE HERE! And there's a lot more of us than you clearly realize."

Latham says they plan to stream their first live test on May 29, and from there, will begin to announce dates for when the stage will be open. All funding generated will come from donations by the audience and will go to the band and volunteers who made it happen. Those who are looking for live-streaming support can write to info@flipflopsounds.com to get more details.

Megan Baker is a Bend-based photographer. Find her work on Instagram at @mbphotographybend or on the web at www.oregonhawaiiphotographer.com.
More