Front-row "victims" get a free t-shirt for the splaying blood in "Evil Dead, the Musical"

It's ti-ime! That's right, Ash is back to slay some zombies in "Evil Dead, the Musical," the Stage Right production opening Thursday at the Cascades Theatrical Company. 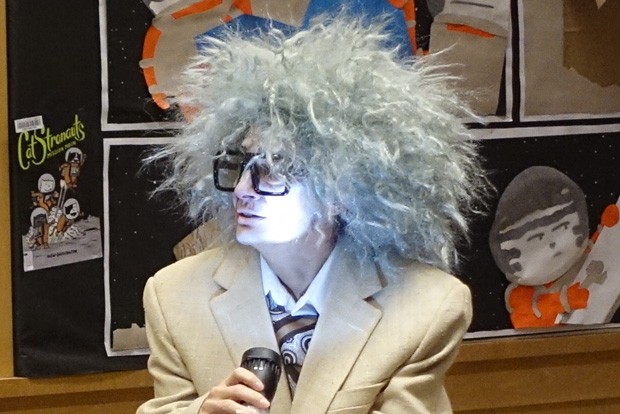 Producer/director Sandy Klein has been bringing the "Dead" to life for Bend audiences about every other year, she says, for the past 10 years. "I thought the last time was really going to be the last time," she says, "because it's a really hard show to put on. It's a lot of equipment, a lot of clean-up!" Liberal use of fake blood—even shooting it out into the audience—has been a part of the "Evil Dead" tradition since the play debuted in Toronto in 2003. "The reason is, in 'Evil Dead II,' the second movie of the series, they went overboard with the use of blood," Klein explains. "So much so that it was censored in some countries."

Another "Dead" tradition is the souvenir t-shirt, provided for "splatter-zone" ticket holders, in the front three rows, to protect their clothing. "Some people don't ever wash them. They wear them over and over. We've had bullseyes, a little pocket design—every year it's different," Klein said. The 2019 tee reads, "Splat-isfaction guaranteed," with a maimed fist punching through a bullseye.

"We still have our chainsaw that squirts the blood," Klein says. "We make our own (blood). It's Karo syrup, water—who knows what the ingredients really are in the store-bought." Klein doesn't want anything potentially harmful splaying around. "Usually people go home and they smell like candy," she smiles. It's good to know, too, that the "blood" isn't going to damage the set. "The cast can aim for the white shirts. 'White shirts only, not the light fixtures!'" she laughs.

"I always give a lot of credit to my cast," Klein adds. "They work hard and endure a lot of bruises. It's a very physical show, with slippery fake blood on the stage. And they're learning some pretty complex dance moves."

While the over-the-top horror is the fun part of the show—in which audiences are known to shout out key phrases along with the actors—there's also an underlying plot. A group of teenagers finds evil lurking in an abandoned cabin in the woods, and they accidentally awaken evil zombies... and ambulatory trees.

"The first year we did it, I had a gal come in with her little 4-year-old daughter to buy tickets," Klein recalls. "I said, 'Are you sure this is going to be OK for her?' And she says, 'Suzie, who's your favorite character in Evil Dead?' and she goes, 'The evil trees!' and I'm like, 'OK, she'll be just fine.' It's totally up to parental discretion. You gotta know, it's five college students and they're gonna do what college students do when they're in an old abandoned cabin in the woods.

"When Sam Raimi and Bruce Campbell did the first movie, it was meant to be serious," she explains. "'Evil Dead II' (aka 'Medevil Dead') ends with Ash being sucked into the vortex and landing in Medieval times. But when 'Army of Darkness' (the third film in the series) starts, he comes out of the vortex and he's enslaved, so he has to break free. The musical puts everything together into one crazy story. It was never meant to be serious. One of the writers, George Reinblatt, writes for Comedy Central."

For the first time this year, Stage Right may be taking "Evil Dead" on the road. "One of the guys who co-directed with me one year moved to Idaho and is looking for a venue to do it there. I let him know I have the whole set in my trailer. I can bring it!" After her six previous local productions, Bend audiences know: Klein certainly can.