Everybody Schlock the Dinosaur

Is it better than the last one? 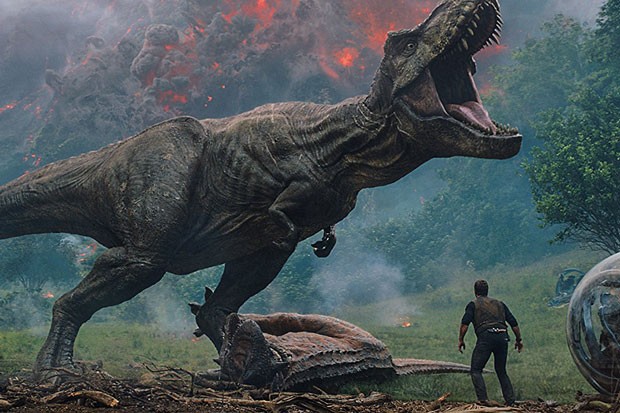 I can't with any sort of seriousness state that "Jurassic World: Fallen Kingdom" is a good movie. There really hasn't been a great movie in the franchise since the original. Even though "Lost World" had its moments, the series has been too afraid to step outside of its comfort zone and escalate it into new and surprising directions.

"Jurassic World" was pretty pathetically transparent in its desperate attempt to reboot the stalling franchise, while also trying to plug itself in as the sequel we've been waiting for: One in which the audience finally sees Jurassic Park open for business.

The considerable charisma of Chris Pratt and Bryce Dallas Howard just wasn't enough to make their thinly drawn characters even remotely interesting, and the plot just felt like a retread of the dinosaur movies of decades past. "Jurassic World" only came alive when the pterodactyls started pulling terrified park attendees into the sky and tearing them apart.

"Fallen Kingdom" initially seemed like more of the same, with Pratt and Howard going back ("WE HAVE TO GO BACK!") to the island to rescue some dinos before an impending volcanic eruption makes them extinct once again. The trailers make the big volcanic rescue look like the entirety of the film, but it's actually just the first hour.

Then it happens: like a spark of light in the darkness or a sneeze under some blankets, "Fallen Kingdom" gives up the ghost and embraces what the entire series has been building toward all along: pure, unadulterated schlock.

The second half of the movie takes place around a massive gothic estate in Northern California where the rescued dinosaurs will be auctioned off to the highest bidder. Obviously, they escape and we get something I never knew I wanted: raptors crawling across vaulted rooftops hunting terrified rich folk.

Don't get me wrong: The dialogue is terrible, the pacing is all over the place and the cinematography is muddy, but I had an absolute blast with the second half of the film. It takes the franchise in directions that "Sharknado" might fear to tread. It's so goofy that I expected the characters to wake and find out the entire film was a bad dream brought about by a heady cocktail of Carl's Jr. and bath salts.

Raptors jumping from explosions like they're Jason Statham. A thinly disguised Donald Trump stand-in getting his wig blown back by hot dinosaur breath. A little girl getting chased up a dumbwaiter by a genetically engineered killing machine. A shot taken straight from Herzog's "Aguirre, the Wrath of God." Chris Pratt's terrible mustache. Either these are reasons for you to see "Fallen Kingdom," or reasons to avoid it.

"Jurassic World: Fallen Kingdom" is high-grade schlock—the kind of movie Mystery Science Theater 3000 would rip apart. It's brilliantly entertaining and deeply flawed on such a fundamental level that I can't imagine how the script was greenlit. If I could remake the film I would call it "Jurassic World: The Hottest Mess." Yet, somehow, I can't wait to see it again.