Expanding the Sounds of Bluegrass

If you were trying to get someone into bluegrass today, recommending this band or their recent album would probably be a solid start. The Infamous Stringdusters became Grammy winners in 2018 for the album, "Laws Of Gravity." The Stringdusters work to bring a fresh take to bluegrass and try to push their musical boundaries. Even if it didn't start with Grammy aspirations, things kind of worked out in the end. 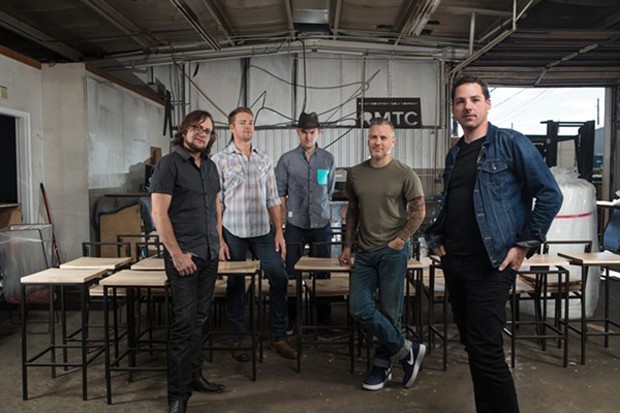 "We were all sort of bluegrass musicians in Nashville. Most of us didn't grow up in bluegrass so we were trying to figure that all out," says Andy Hall, vocalist and dobro player. "We were all interested in expanding the sounds of bluegrass."

Being able to take advantage of what Nashville had to offer within the bluegrass community was huge for the band members. Hall cited bluegrass heroes such as Jerry Douglas, Sam Bush and Bela Fleck as just some of the greats who have lived and performed in that very musical city. It's basically a who's who of bluegrass, and The Stringdusters were able to soak that all up.

Hall says he originally started out listening to rock and heavy metal. It wasn't until his senior year of high school that he started expanding his horizons, which ultimately would lead to a move into bluegrass. Once he dove in, the genre felt like home.

"I started as a heavy metal guitar player. Then I started to find some other sounds I liked," Hall recalls. "When I was about 18, somebody gave me a Bill Monroe boxset for my birthday and that really turned me into bluegrass in a big way. Hall admits bluegrass can be an acquired taste, but that's why the band members work so hard to incorporate new aspects to their music. They experiment with a lot of rhythms and tempos that one might find more regularly in rock or funk. That's the biggest challenge of being a bluegrass band in 2019, says Hall. It's mainly just trying to "get people over the hump."

If someone needed to get over the hump, going to an Infamous Stringdusters show might do the trick. When the band is live you can expect a fiery stage presence and performance that will reach throughout the crowd.

"That all came about pretty naturally," Hall says of the group's stage chemistry. "We like to move. A lot of times during a jam or a solo, two people will come together on stage and kind of face off. We just like being in each other's spaces when we're doing things together. I feel like you can get a lot from that."

The Infamous Stringdusters have an album ready for release in the spring. It includes 13 brand new songs, with a single coming in the next few weeks. Until then, you can catch them taking over the Midtown Ballroom Jan. 23.