Eyes in the Sky | Outside Features | Bend | The Source Weekly - Bend, Oregon

Eyes in the Sky

In a time when technology is taking over, the team managing the Deschutes National Forest still does some things the old-fashioned way. In addition to airplanes and helicopters, fire lookout towers are a critical part of finding fires early.

"It's all about early detection," says Joey Hodgson, a Forest Service employee who's been a lookout for 24 years. "We don't have the time between when we see the fire and when we call it in that we did 10 years ago, and there is a lot more at risk these days than there was 20 years ago." 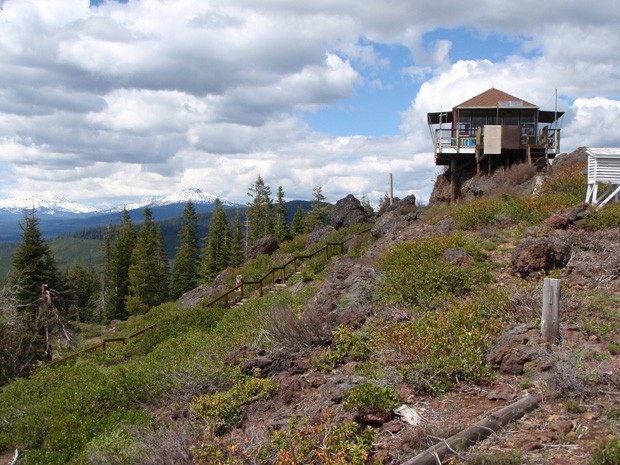 Fire detection these days is almost a competition between the lookouts, people patrolling from the air, commercial aircrafts and the public, Hodgson says. The outcome is the same whoever calls it in, but that competition provides an added incentive for lookouts to be attentive at all times.

"It's a low-stress and high-stress job," he explains. "Sometimes nothing goes on for a while, but when there is a fire, you're incident command and there is no room for a mistake. People's livelihoods depend on you."

Hodgson says the job of a lookout is often romanticized, but it's not for everyone. He works primarily at the Lava Butte lookout tower, one that receives a lot of visitors due to its proximity to Bend and the Lava Lands Visitor Center. Other lookout towers, however, receive very few visitors. Some people like the solitary nature of the job, but others, like Hodgson, appreciate the company.

When Hodgson and the other lookouts aren't answering questions from visitors, they're scanning the horizon looking for "smokes," while also listening to the dispatch radio, which broadcasts 16 other channels. Since they don't often see actual flames from their position on the mountaintops, they're primarily looking for the telltale smoke. When they see it, they follow a specific protocol.

To pinpoint the fire, the first thing they do is use an Osborne Fire Finder—basically a giant compass, sometimes with a scope attached. They record the latitude and longitude, then fill out a smoke report sheet, which includes weather and how that affects fire behavior. Then they call into dispatch, explains Rachel Lindgren, who also works at the Lava Butte lookout tower.

"We spot, plot and then give the report to dispatch," Hodgson says. "They decide what action to take, and we act as incident command until someone gets to the scene, since we're the eyes in the sky."

These steps—especially the first step of noticing the fire—are key to keeping fires small. Oftentimes, when lookouts see a fire, it's still small—about the size of a campfire. By getting people to the scene of a small fire, the lookouts are saving time and money. Technology such as satellites can't see the wispy plumes of smoke from a small fire—so by the time a fire would show up on a satellite it could be an acre large and spreading, Hodgson said.

Many variables affect how quickly a fire spreads, but one of the biggest is wind speed. If a fire has moved up into the crowns of trees in a 30-mile-per-hour wind, that's the same speed at which the fire will grow, according to Hodgson. That was one of the reasons why the 2017 Eagle Creek Fire in the Columbia River Gorge spread so rapidly—the blustery Gorge acted like a wind funnel.

Despite the pressure and constant vigilance required for the job, Hodgson loves it. He appreciates the expansive views and enjoys working in part of a system that he considers an important part of Oregon's history.

"People think of something like the Oregon Trail as a big part of Oregon culture, but I think these places are just as special," he says. "The forest means so many different things to different people, so it needs to be preserved for different generations."

Most of the lookout towers were built by the Civilian Conservation Corps in the 1930s and haven't changed much since. They're part of the National Historic Register, and Hodgson hopes they, along with other historic Forest Service buildings, will continue to be used far into the future.

For those interested in visiting a fire lookout tower, Hodgson suggests the tower at Lava Butte, because it's the closest tower to Bend and has an interpreter stationed at the top to give people information.