As Collective Soul approaches its 25th year, it kicks off the concert series for the Deschutes County Fair's 100th year

E Roland, singer/guitarist of Collective Soul, feels the band's new album, "Blood," is the strongest album from start to finish his group has done. He became convinced of that after a band get-together that was intended to reach a consensus on what song should be the album's first single. 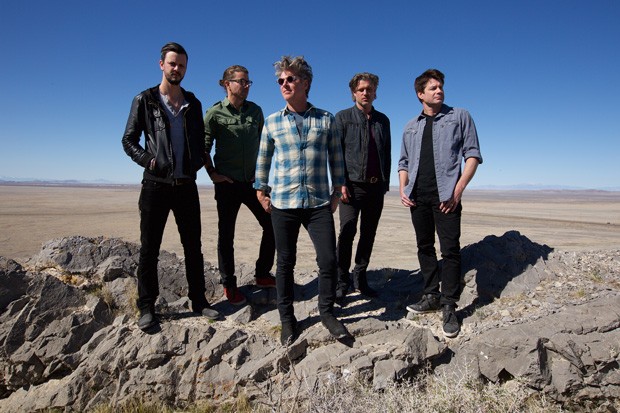 "When we decided to release a single, I was sitting down with the guys (in the band) and we all wrote which one it should be," E Roland recalled during a recent phone interview. "Every one of us had a different song. So that shows you to me, it didn't help the cause of picking a song (for a single), but it was like as a body of work, we all like it."

Collective Soul had no shortage of new songs available for the new album.

"We recorded 10 songs (in 2017). Originally, we thought we would just do a record where the first side would be the rock and the second would be more orchestrated, like 'World I Know' and 'December,'" E Roland explained, mentioning a pair of his band's more textured hits. "We finished that, and then we went on tour...At the beginning of (2018), I wrote another batch of songs. I showed them to the guys, and they were like 'Man, we've got to record these.' We spent 10 days up at a place called the Barber Shop in (New) Jersey and in 10 days knocked it out."

In all, Collective Soul recorded 22 songs, and for a time the band pondered putting all of them out on a double album. E Roland, who as of this year has decided to go by the name E Roland (instead of Ed Roland), said that notion died a quick death.

"It didn't take long for our management to go, 'you're not releasing a double record.' So that shut that down pretty quick," E Roland said. "You know, these days with streaming, I can't ask someone to sit there and stream 22 songs, an hour and 15 of music. That's asking too much of the audience. So, we decided to just break it up into two. So, this one ("Blood") comes out this year and the other (album) will come out next year."

I've got to be honest with you, with Jesse and Johnny involved in the band now, they've really kicked Will, Dean and I in the ass. "They're awesome. If I could have the band to start over, this is the band I would want, not only from the playing side of it, but from the personality side of it. - E Roland tweet this

The songs on "Blood" add to an already deep catalog Collective Soul began building in 1993 when Atlantic Records released what was essentially a demo of E Roland songs as "Hints Allegations and Things Left Unsaid." Featuring the hit single "Shine," the album went double platinum, as E Roland recruited the other members of the original Collective Soul – his brother, Dean Roland (guitar), Will Turpin (bass), Ross Childress (guitar) and Shane Evans (drums) – and the group began touring.

That lineup scored an even bigger hit with the triple-platinum self-titled second album (featuring hits like "The World I Know," "December," "Where The River Flows" and "Gel"), and continued to enjoy considerable success with three more albums before fortunes began to wane, the band lineup began shifting and the group parted ways with Atlantic Records.

But E Roland feels Collective Soul was rejuvenated after drummer Johnny Rabb joined in 2012 and guitarist Jesse Triplett came on board in 2014.

"I've got to be honest with you, with Jesse and Johnny involved in the band now, they've really kicked Will, Dean and I in the ass," E Roland said. "They're awesome. If I could have the band to start over, this is the band I would want, not only from the playing side of it, but from the personality side of it."

The "Blood" album should go over well with fans of Collective Soul's other nine studio albums. The album opens with a bang, with four hyper-catchy and punchy rockers – "Not The Time," "Over Me," "Crushed" and "Right As Rain" before shifting into the more expansive mid-tempo territory, as the group tips its hat musically to the late Tom Petty (as well as the Cars and Elton John) on "Good Place To Start," builds from a simmer to an epic crescendo on "Observation of Thoughts" (a song about E Roland's sister-in-law, who lost her battle to cancer about a year ago) and ends the album with a bit of a folky moment with "Porch Swing" (featuring Styx's Tommy Shaw on dobro and backing vocals).

Now out on a headlining tour—including being the kickoff concert at the Deschutes County Fair Wednesday night—E Roland and the band are understandably excited to play songs from "Blood." But they won't omit the hits – which considering Collective Soul has notched 17 top 20 singles (including seven No. 1 Mainstream Rock hits) in a career that hits the quarter-century mark this year, is a substantial body of work in and of itself.

"In releasing our tenth studio record we have a lot of songs," E Roland said. "Of course, we're going to play the songs everybody is familiar with. At the same time, you do want to promote the new recording because you're excited about it. That's why we're going out. We want to show we're still kicking in what we do. I think we'll add about six new songs and kind of strategically place them in there, so you don't lose interest."