Known as one of the few homeless shelters in Bend, The Bethlehem Inn has become a pivotal place to help families get back on their feet.

The Bethlehem Inn began their Transforming Lives Together fundraising campaign only a few years ago, but since then they have raised more than $8.3 million. The money has gone towards constructing the first of two new buildings, which opened in August of this year, and provides temporary housing for families.

According to Liz Clemens, Families First program manager with Bethlehem Inn, the families living there are from all different places in life — the only commonality is that they are struggling with housing.

"We work with them directly to figure out their barriers and then accomplish goals, and that varies family to family," she explained. "That can be connecting people with a primary care provider, getting them OHP, getting the kids to a school, whatever that looks like for the family."

The money already raised for the Bethlehem Inn was contributed mostly by large donors, but for this final push, they are hoping to involve members of the community at any level. To show how the staff and volunteers at the Bethlehem Inn are working to transform the lives of those in the community, donors will be able to give in a loved one's name, with the purpose of honoring them by how they have transformed the donor's life. According to Gwenn Wysling, executive director at the Bethlehem Inn, the goal is "to recognize how important people's support in our lives is, and how that can support finishing off our campaign."

The organization has been in their current location for more than 10 years, previously housed in an aging motel, built decades ago. The new building not only offers families a contemporary environment but can house 10 families at a time versus five in the old location.

The goal of the Bethlehem Inn is to not only help adults who are struggling, but to provide a normal life and safe place for their children. Since the opening of the new building, 17 families have been housed already, with eight of those having moved on with outside housing secured. Staff expect to house up to 120 families a year in the new facility.

Bethlehem Inn also works with 70 different partner agencies to help families in a multitude of ways, including finding housing and helping the children adjust to school. The families are given five weeks to find housing, and most families are able to save enough money for a deposit in that time.

Many aspects of the new building design were planned with families in mind.

"There's not a comparison to what we have come from to this," said Clemens. "This is definitely a more secure facility, in a sense that everyone needs a key to even enter the bottom floor. You need a key, again, to get upstairs, and that's where the family units are. Safety was first and foremost when we designed this building." 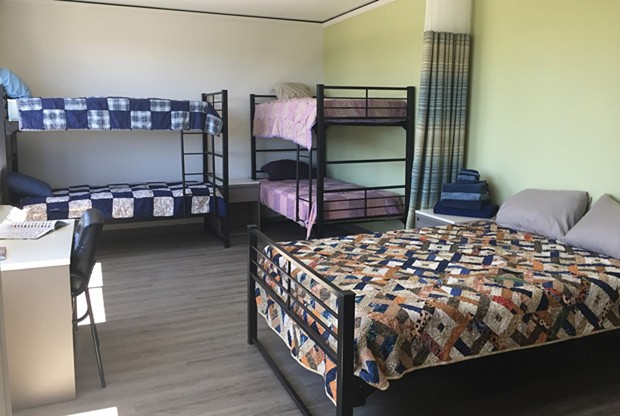 The new building has an outdoor playground for the children, where previously they had no outdoor space other than a parking lot, and the kitchen and dining areas are now inside the building. In their former building, volunteers would cook off-site and bring the food in. Residents would have to walk outside to get to the dining area. Families presently enjoy a separate dining area from non-family residents at the Bethlehem Inn, which allows them to eat together in a smaller, closer setting.

The food has traditionally been cooked by different volunteers each night, and now those volunteers can use the new chef's kitchen to cook the entire meal.

"We've had a core group of volunteers, and we've been training and engaging them in the use of an amazing facility that we've never had before," Wysling said. "We are cooking for 116 tonight. We're seeing, with the expansion of the families, that we're always over 100."

The goal is to move into the second building by summer of 2019, and the board hopes to raise the final $650,000 to attain their goal of $9 million by spring.

"This building is owned by the community. It's an organization that this community started grassroots, and it continues to be that resource for so many in our community," she added. "Whether it is the person in need for the family, or the volunteer, or the donor that believes so strongly in really taking care of one another, our neighbors, our brothers, our sisters."

To learn more about the campaign, visit:
bethleheminn.org/capital-campaign/help