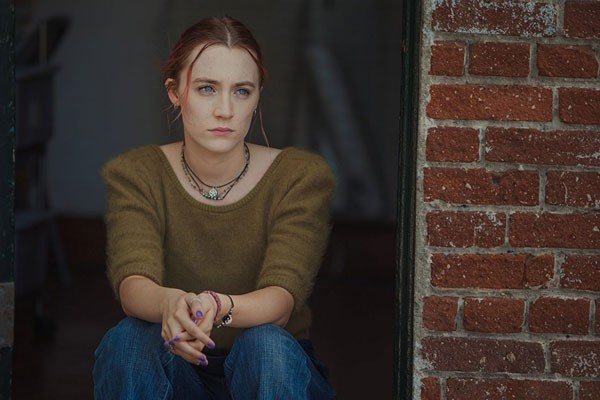 It's easy to be nostalgic about the rotten moments in the past, since it's clear we made it out alive. But regardless of how positive the present might be, there are still those smells and textures that put us back in a different place or time, one in which everything seemed infinite and the future rolled out ahead like a red carpet... whether it's the lighting of a childhood bedroom, the sound of your first doggo barking or the opening swell of a song that got you through something awful.

"Lady Bird" doesn't cash in on the current trend of exploitation through nostalgia. Instead, it shows us a life couched in white American familiarity, set in a time too recent for us to miss and too far away to remember completely. Set in Sacramento, Calif., in 2002, "Lady Bird" will probably be described as a "coming-of-age drama" when it's actually altogether more.

Christine "Lady Bird" McPherson is a senior at a Catholic high school, struggling with her future. She hates Sacramento and thinks she would be happier on the east coast where she feels all the culture comes from. Her mother is perpetually disappointed with her work ethic and her father is eternally supportive, but Lady Bird tries to pay no heed: She's going to fully commit to every single idea or impulse she has...regardless of the consequences.


Writer/Director Greta Gerwig, star of "Frances Ha" and "20th Century Women," makes an astounding debut with "Lady Bird." Gerwig rose up the ranks as an actor in the mid-2000s' mumblecore film movement, collaborating with directors including Joe Swanberg, the Duplass and Noah Baumbach, and cementing herself as the Indie It Girl for many years. But Gerwig always had more going on than just a series of quirky mannerisms to build a movie around; you could always see her thinking and feeling behind her giant eyes. She could express more with a smile than 30 lines of dialogue ever could.

Gerwig applies this innate understanding of subtext and emotion not just with a script that feels like real people talking to each other, but also with the performances and the little moments of truth she finds beneath her lens. There are scenes lasting only seconds, but they convey more truth and beauty than other films are able to squeeze out of their entire running time. A fleeting shot of Lady Bird's feet in a bathtub made the entire audience erupt with laughter without a word of dialogue.

As truly wonderful as Saoirse Ronan is as Lady Bird, it's Laurie Metcalf who could win an Oscar as Lady Bird's mother, Marion. She says some incredibly cruel things to her daughter throughout the film, which then juxtaposed with scenes of her at work loving and empathetic with psychiatric patients. She's not a hero or a villain...just a person doing her best. Marion is such a complex character that her relationship with Lady Bird is the centerpiece of the entire film, leaving the audience basking in a fully realized creation.

"Lady Bird" is so many things: a love letter to Sacramento, an aching tribute to adolescence and a tender hug to the families we didn't appreciate when we were younger. Most of all, the film is deeply human and begging for connection. Our lives might not be the same as Lady Bird's, but they don't need to because we recognize ourselves in her anyway.