Family Ties to the "D" | The Source Weekly - Bend, Oregon

Family Ties to the "D" 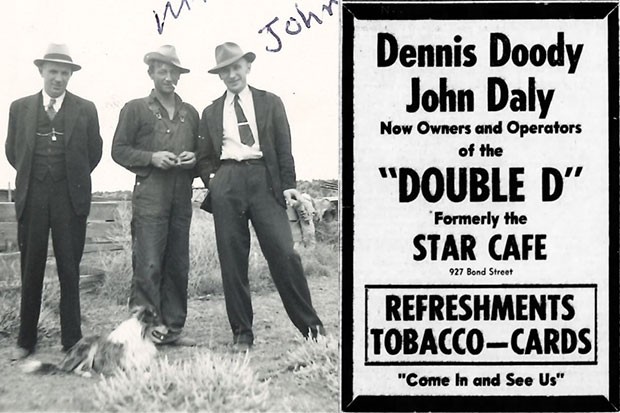 In 1917, my great-grandfather, John Cronin, moved to Powell Butte, a small farming community east of Bend. He was born and raised in Ireland and came to Oregon in search of adventure and opportunity. He found it in a sheep ranch.

A decade later, his nephews John and Matt Daly followed him to Central Oregon. In 1941, John Daly opened a bar in downtown Bend with partner Dennis Doody. The "Double D" was born. A few years later Daly became the sole proprietor of the bar but kept the name. He ran the D&D with the help of his brother, Matt, for close to 30 years. The bar has changed owners over the years, but the location and name remain the same.

When the D&D opened, it was located in one of Bend's old wood structures on Bond Street. In 1955, Daly replaced the original building, using pumice blocks and brick and adding a kitchen and counter seating.

The Irish who came to Central Oregon found each other there. Daly helped those new to the country with small loans, navigating the path to citizenship and making sure patrons didn't spend their entire paychecks at the bar. A barber was located in the back of the bar.

Proud to be a local business owner, Daly started an association for tavern owners and was a member of the Elks, Eagles and Veterans of Foreign Wars clubs. He dressed in a suit and tie and was at the bar every day, sometimes sleeping in the back.

John Daly's brother, Matt Daly, was equal parts D&D patron and bartender. The brothers were bachelors who lived on a small farm in east Bend, breeding and training race horses for the West Coast circuit. In 1960, John Daly was the leading Oregon breeder at Portland Meadows, with seven winning horses. Matt found success as a horse trainer.

John Daly died in 1969. He was laid to rest at Pilot Butte cemetery after a rosary and mass at St. Francis Catholic Church. Nine days later, Matt died of a heart attack at age 65. A rosary was said, a Requiem mass held, and Matt was laid to rest next to his brother.

The D&D Bar & Grill continues on.