Farm (to Box) to Table 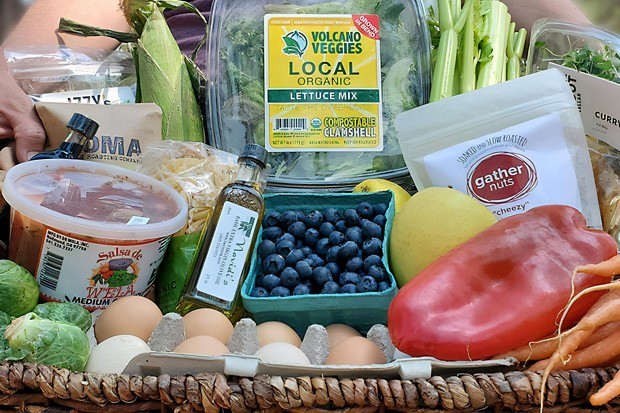 "Our farm uses 90% less water than outdoor farms, and our veggies are harvested the very same day that we deliver them to our direct customers," said Shannon Sbarra, who co-owns the company with her husband, Jimmy. "We offer a year-round CSA called the Fresh Club, and it's actually a subscription. Customers can order local greens from Volcano Veggies and other local farms. We work with about 15 local farms and food companies each week, and we've purchased from almost every food business in Central Oregon at least once! Home delivery is always free."

Sbarra detailed some of the current subscription add-ons. "Our 'Local Stuff' selection is basically a tour of the farmers market and local food economy. We choose a new local food product or business to support every week. 'Seasonal Rotating Fruit' follows the season with a surprise order of in-season fruit. 'Seasonal Rotating Veggies' adds variety to your meal plan with delicious, local veggie crops as they come into season. 'Something Extra' is fun; every order comes with an extra surprise! It could be an extra box of greens from Volcano Veggies, a cupcake from Ida's Cupcakes or a snack size pack of almonds from Gather Nuts."

Volcano Veggies offers four multi-sized produce boxes, in addition to a box filled with eggs, meat, cheese and veggies and a green smoothie-making kit. "With all this smoke, the farmers markets are closed," Sbarra added. "But Central Oregon crops are actually at their peak! So now is a better time than any to support local farmers and eat clean."

Take a look at all curated options at: volcanoveggies.com/

“With all this smoke, the farmers markets are closed. But Central Oregon crops are actually at their peak! So now is a better time than any to support local farmers and eat clean.”—Shannon Sbarra tweet this
Agricultural Connections

Agricultural Connections offers several Harvest Boxes, all available for weekly pick-up or delivery. The Small Harvest Box includes enough fresh fruits and veggies for between one and two people, and includes produce harvested from local farms in Central Oregon and the Willamette Valley. The Standard Harvest Box feeds three to four for a full week, and the Full Harvest box feeds four to six. Those looking to give back to community members can do so by purchasing a Produce Box to be donated to a local shelter – typically Shepherd's House.

Andrew Adams founded AC in 2010, when he discovered that many Bendites were hunting for a place to find farm-fresh produce year-round – not just during the farmers market season. The business has since been adopted by local Elizabeth Weigand, who grew up on a farm north of Madras. Weigand believes in a community where local farmers are recognized as heroes at every meal. Check out all available box subscription options at: agriculturalconnections.com/

The Vegetable Man offers a range of pre-made boxes and customized boxes, stuffed full of seasonal fruits and veggies. The Express Box, ideal for between one and three people, typically contains three to four seasonal fruits and four to five seasonal veggies. The Imperfect Box offers the same, but includes blemished produce (taste not compromised). The Veggie Box is ideal for between one or two veg-exclusive herbivores. Families of four or more who believe strongly in eating their greens (and reds, and yellows, and oranges...) might go for the Harvest Box, packed with three to four fruits and seven to eight veggies.

Sam Parla first began the business back in 1983, before handing it off to his daughter and son-in-law, Andrea and Ryan Couch, in 2012. The Couches have maintained close relationships with small farmers in Oregon, Washington and California, consistently bringing farmers market-quality produce to Central Oregonians year-round.

Check out box options and produce add-ons at: vegmanexpress.com/