Local farmers weigh in on the importance of eating consciously, locally

Every Thanksgiving, Americans consume roughly 46 million turkeys—the vast majority being factory farm-raised, spending the entirety of their short lives crammed into sheds with thousands of other turkeys. They're force-fed a strict diet of antibiotics including tetracycline, streptomycin and ampicillin, making them more likely to carry antibiotic-resistant bacteria. Their beaks and toes are snipped so that they don't peck or claw one another.

Bred for size, most turkeys can't reproduce (the males' breasts are too large for them to successfully mount the females), so they're artificially inseminated. Poultry are the only animals exempt from the federal Humane Methods of Slaughter Act, according to an article published in the Los Angeles Times in 2017. There's zero federal enforcement regulating the way turkeys live and die.

While wild, heritage turkeys can live up to 12 years, farm-raised turkeys live just over four months. Still, there are many locally-raised turkeys that live long and happy lives; turkeys that get to roam freely, enjoy a delicious diet of bugs and grains, and have all the freaky turkey sex they want.

Sarahlee Lawrence, who grew up on the land she transformed into Rainshadow Organics in 2010, spoke on the importance of diversity in food.

"Vegetables are heirloom, and animals are heritage," she explained. "There's a big difference between heritage birds and broad-breasted whites." Broad-breasted whites are genetically modified and produced for breast meat. Heritage turkeys are smaller, with more rich, juicy dark meat. According to the American Poultry Association, a heritage bird must meet three criteria: It must mate naturally, live a long, self-reliant life outdoors and grow at a natural, slow rate.

"All of our turkeys are heritage breeds. We have Bourbon reds, Narragansett, Spanish blacks, Royal palms... the list goes on. What a lot of people don't know is that the Butterball turkeys they buy from the store cost the same amount as a heritage turkey chick." Every year, Lawrence raises 100 turkeys—most of which sell long before November.

“They roost in the trees at night, they fly… they take a long time to raise. They get to roam freely about the pasture.”—Sarahlee Lawrence tweet this

"We begin raising the turkeys in March, and we harvest them fresh right before Thanksgiving. Most people will put their deposits down in mid-summer." When asked about a typical day-in-the-life of one of her turkeys, she responded, "We love them and we treat them well. They're one of our favorite parts of the farm! They roost in the trees at night, they fly... they take a long time to raise. They get to roam freely about the pasture." While Rainshadow Organics is sold out of turkeys this year, the farm store is open Thanksgiving Day with a wide variety of other produce. "We've got vegetables, meat, grains... we raise chickens, so we've got eggs, as well as pork and beef. Sausages for stuffing, freshly-ground flour. All of your Thanksgiving needs!"

Keola White, who raises a small number of heritage breed turkeys at Juniper Jungle Farms, weighed in on the risks of eating genetically modified meat. "When you buy a turkey from the grocery store, you don't know what they're gonna do to it—how they're gonna raise it. What they're gonna feed it." He also noted that the methods of slaughter were often inhumane. "I make sure that it's as painless as possible for them," he said, nodding to the frantic turkeys darting about the field. "They just go about business as usual. I make sure that they enjoy their last day—I don't want to stress them out. The way the factory farms go about things, man, it's sketchy." 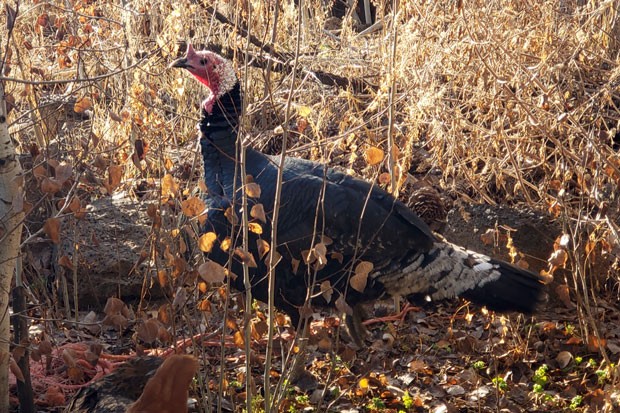 Turkey isn't the only potentially sketchy feast food. Potatoes can be riddled with dangerous toxins and biogenic amines when genetically modified. In 2017, the Environmental Protection Agency and the Food and Drug Administration approved three varieties of genetically modified potato. In 2018, one of the scientists behind these GMO tubers made a public renunciation, condemning them as unsafe for human consumption. Marketed as "bruise-resistant," Dr. Caius Rommens revealed that the potatoes actually concealed bruises that could easily accumulate harmful pathogens. Because the bruises are not visible, consumers can't remove them, increasing health risks. Infections are not visible, either, he said.

Meanwhile, Central Oregon has no shortage of organic, locally-grown produce. Red and blue fingerling potatoes are available at Fields Farm (owned by Jim Fields), produce at Rainshadow Organics' farm stand and Central Oregon Locavore offers produce and meat. And if raising a heritage turkey from a chick and slaughtering it come the end of November seems like a tall order, locals can reserve a bird from one of several local farms for next year's feast.