A Central Oregon farmer seeks to revive a farming trend that can be an alternative to beef: Ostriches

Calling this animal a pet may be a stretch, but between Bend and Redmond, 17 ostriches roam around a hatchery. The 7-feet-tall birds are in their mating season, and deep in the pasture you can spot the males dancing trying to grab the attention of female members of the herd.

Soon, the farm will be full of chicks that’ll live in a 100-degree greenhouse before being sold to other farms or slowly ingrained into the herd. With the right nutrition ostriches can lay up to 60 eggs during a mating season, but about 25 will actually be viable with the right nutrition. 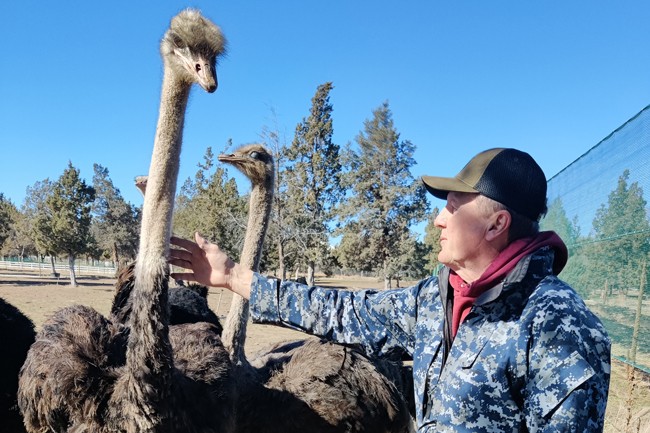 “Historically, in the U.S.—and this is still true for farms that are using conventional feed—that numbers five or six hatchlings per hen per year,” said Michael Lehman, owner of Central Oregon Ostrich and vice president of the American Ostrich Association. “On our program we do about 25.”

Ostriches became a fad in farming in the ‘90s, and back then there were a handful of farms in Central Oregon. The trend didn’t last long, though; farmers didn’t know how to raise ostriches effectively, and there wasn’t an infrastructure for getting them to market. When Lehman started the farm in 2009 he took those lessons to heart.

“The reason the ostrich boom failed the first time was for lack of knowledge about the nutritional requirements for ostriches, and they’re nothing like conventional livestock,” Lehman said. “They’re desert dwellers; they get most of their hydration in the wild from the plants that they eat, they don’t really have water to drink. So their physiology is really designed to survive and thrive in really harsh desert.” 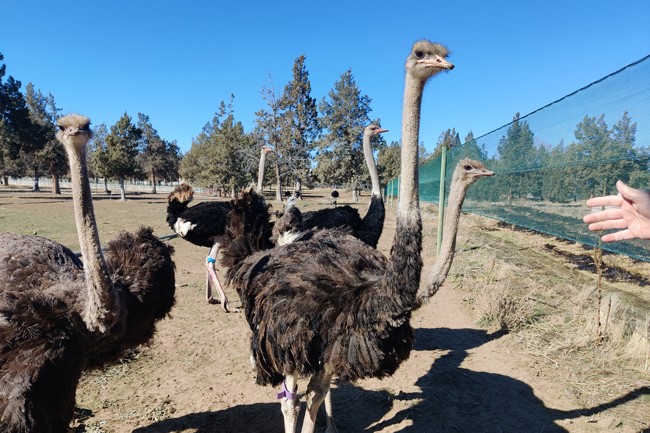 With a good environment for ostriches in place—minus the snow, which fortunately rarely happens on the farm and melts quickly when it does, Lehman then needed to find a good food source. There’s no shortage of what he ended up using in Central Oregon: spent brewery grains.

“We just happened to be in this business cluster of breweries,” Lehman said. “It’s a waste product out of the breweries here locally. Most of the firms that I work with use our feed program, which is based primarily on brewers’ grain, which is almost a free feed stock. And you end up with high productivity and low feed cost, which tips the balance. That’s what killed the industry the first time.”

If they feel under threat, they’re all together all at once, and they’re gonna run away,” Lehman said. “And if they can’t run away, they’re gonna turn around and run right at their predator. He might get one of them, but he’s gonna get stomped along the way.” —Michael Lehman tweet this

The first ostrich boom was also damaged by farmers treating the birds like conventional livestock. Early ostrich farmers put ostriches in small paddocks and tried to breed based on characteristics. The problem is that small grazing areas, conventional breeding strategies and keeping them from a herd can get ostriches stressed.

“None of that is a naturalistic way of managing birds. And so we run large colonies and large paddocks they go out and do their thing, they develop their own social structure which keeps them happy,” Lehman said. “Most of ostrich behavior is all about that social cohort that they grow up in. And when you’re raising them, the best way to raise them, is to raise them in a social cohort that never changes.” 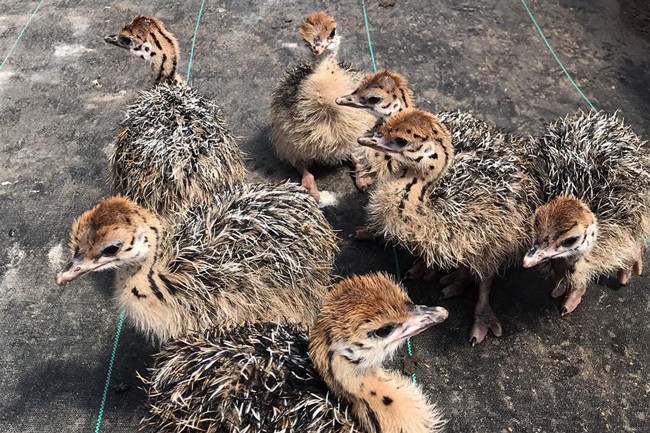 In the summer these cohorts stick together tightly, but in mating season they spread out to do their own thing. A couple ostriches might develop guardian roles and are the first to greet anything that steps foot in their pasture.

“There’s a little bit of posturing within that group, but for the most part, they’re all just a bunch of happy soldiers,” Lehman said.

They can be terrifying soldiers if need be. Their height, speed and intimidating talons can be lethal to predators, especially with their pack behavior.

“One of their defense mechanisms in the wild is that social mechanism. If they feel under threat, they’re all together all at once, and they’re gonna run away,” Lehman said. “And if they can’t run away, they’re gonna turn around and run right at their predator. He might get one of them, but he’s gonna get stomped along the way.”

Despite this, Lehman said it’s pretty easy to manage the birds, especially if they’re in a natural environment and fed right. He said he’d rather deal with ostriches than a bull, and he’s always got a guard dog who has his back when close to the birds. Beef also happens to be ostriches’ biggest competitor in the meat business. Ostrich is also a red meat, but much lower in fat. Part of Lehman’s excitement with the business is that it offers an alternative that conserves water, produces a fraction of the methane of beef production and needs much less land.

“You can do a really successful productive ostrich farm on 30 acres,” Lehman said. “You can’t do that with cattle.”